Imran Khan is tipped to be the Prime Minister of Pakistan, following the 2018 General Elections. Early indications suggest it could be a hung parliament.

"The people of Pakistan can look forward to a golden era."

Imran Khan is likely to be the 19th Prime Minister of Pakistan as he closes in on a famous victory. His Pakistan Tehreek-e-Insaaf (PTI) party lead the 2018 General Elections, but may not win enough seats to have a clear majority.

The counting of votes and the verification process will run throughout the night.

As the unofficial results were rolling in on 25 July 2018, PTI supporters began to celebrate on the streets.

The conclusive result of the elections should arrive by Thursday 26 July 2018. However, if Imran comes into power, he may have to form a coalition government.

Polls in Pakistan closed at 6 pm local time to choose the next Head of Cabinet. People also had the opportunity to vote for representatives in the country’s House of Parliament.

Nine major political parties and independent candidates were participating in the elections. A total of 849 National Assembly and Provincial seats were up for grabs.

Whilst the security situation in Pakistan is better than 2013, the 2018 election campaign has seen violence. Officials claim 31 people may have lost their lives following an explosion outside a crowded polling station in the city of Quetta.

On a day which was fairly smooth, people from all over Pakistan went to vote. With people having to queue up at the polling stations, the turn out was good in comparison to previous elections.

Earlier in the day, Pakistan cricket star turned politician Imran Khan went to cast his vote. Other politicians as well as the Chief of Army Staff, General Qamar Bajwa also voted in.

Imran pledges to crack down on corruption and boost the education sector after taking on the Premier role of the country.

His main opponent, former Prime Minister Nawaz Sharif was given 10 years in jail following a trial on corruption charges, which Imran fought for. 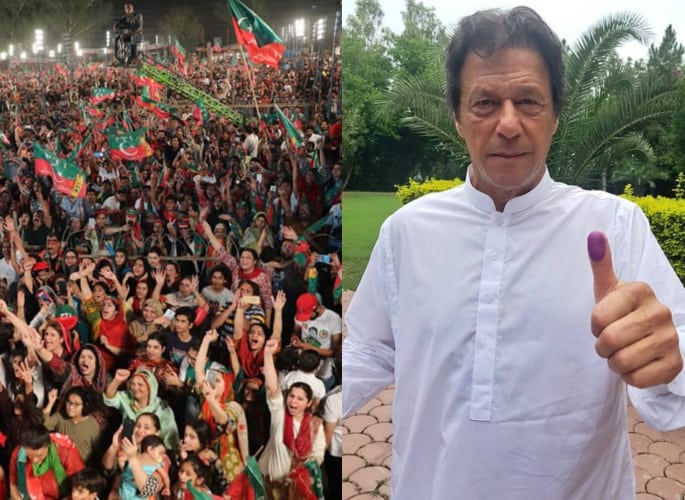 Speaking on PTI potentially being the largest party in the next parliament, spokesperson Naeem-ul-Haque says:

“I think the hard work of PTI, the members of PTI which is now definitely in my opinion the biggest political force in the history of this country.

“The people of Pakistan can look forward to a golden era.”

Shahbaz Sharif who now is the President of PML-N rejects the results of the elections, claiming massive fraud.

The younger brother of Nawaz held a press conference where he told the media:

“I thought voters were free to vote in elections. But our workers were arrested with terrorism charges framed against them.”

The 2018 General Elections became a battleground for two competing narratives about the conviction of Nawaz Sharif. His fans say the establishment and agencies have worked behind the scenes to remove him from power.

Meanwhile, Imran claims this is a clear ploy by PML-N workers to distract people from the corruption allegations.

“This is the dirtiest election in Pakistan history. It is not an election, but selection.”

Despite the reservations of many, the Election Commission of Pakistan (ECP) has ruled out any foul play.

Though people are divided by the outcome, Imran is all set to take control of the country. In defence of Imran, he is a man who has finally succeeded against the status quo.

But the charismatic Pathan should refrain from using inappropriate language which has had a negative impact on the youth.

It is too early to predict how Imran and his party will do in governance. The pressure is extremely high on him to deliver.

PTI can expect to win anything between 115-120 seats. Imran’s present wife Bushra Maneka could already be packing a suitcase for her new residence at the Prime Minister house.

DESIblitz congratulates Imran Khan, the next Prime Minister of what he terms as a “Naya Pakistan.”