"I want to dedicate my #WBO win to Mohammad Ali"

His fight on Saturday 16th July 2016, in Thyagraj Stadium in New Delhi, India, was his first fight in India in six years.

As he entered the stadium shouts of ‘Viju…Viju…Viju’ filled the stadium with crazy cheers and whistles from the crowd urging the man from Haryana to make his mark.

He got support from many Indian celebrities, including the cricketing legend, Sachin Tendulkar, who tweeted:

Wishing all the very best to @boxervijender. You will surely make our nation proud. #RingKaKing

The fight started in the first round with a defensive stance from both boxers. A single jab from Vijender landed nicely on Kerry and a hit from Kerry caused Vijender to slip on the mat but he was up instantly with a smile.

In the second round,more punches flew between the two and Kerry hit back at the Indian’s midriff. Hope looked more aggressive but was easily tamed by Vijender.

Vijender Singh tried to do more in the third round but Kerry handled what Singh threw at him, increasing Singh’s impatience. The round ended pretty evenly.

The fourth round saw both boxers come out with more aggression. Vijender threw a storm of punches with the support from the crowd chanting his name. Kerry got a gash under his eye but retaliated.

By the fifth round, Vijender started to show his prowess and hit some great punches on Hope’s body. Giving Singh the edge in the fight.

Round six further showed Vijender’s domination with more blows to Kerry’s right side. Power-packed punches from Singh gave him the sixth round. 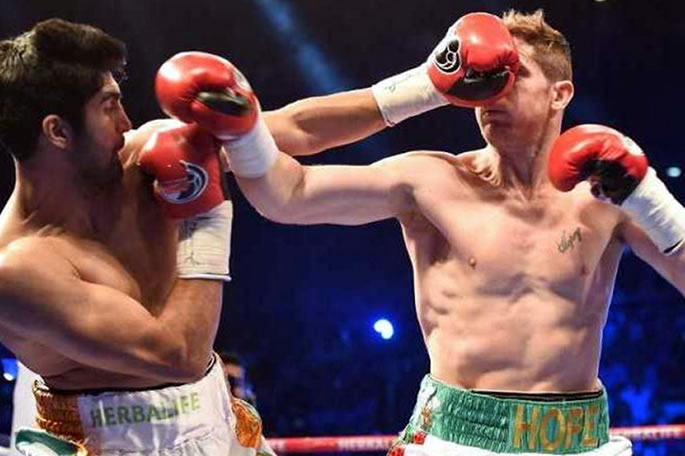 Into the eighth round of this amazing fight, saw Vijender continue to show his lead against Kerry.

Round nine started with Vijender a little looking exhausted but still showing he is has what it takes to win. Both boxers ended the round ready to go the full haul.

The final round showed Vijender’s dominance and Kerry on the defensive.

The judges decision followed instantly after the final bell and Vijender Singh was declared winner. Winning his first ever pro boxing title.

The crowd erupted with incredible scenes all around the stadium. Singh was emotional and overjoyed with his win.

Vijender thanked the crowds for the immense support and said:

“Thank you India! I didn’t expect it to go to ten rounds. It is all to my country, not about me! We have been working hard for this. Finally we did it and we will work to improve my ranking now.”

He added: “I want to dedicate my #WBO win to Mohammad Ali”.

Prime Minister of India Narendra Modhi tweeted after his win:

Congratulations @boxervijender for a hard fought and well deserved win. It was yet another display of immense skill, strength & stamina.

This gives Vijender seven out of seven pro wins in his boxing career to date.

Baldev enjoys sports, reading and meeting people of interest. In between his social life he loves to write. He quotes Groucho Marx - "The two most engaging powers of an author are to make new things familiar, and familiar things new."
Ryan Giggs to play in India’s Premier Futsal
Asian Cricket Awards 2016 Launch