Olympic Bronze medallist Vijender Singh ended his India career as he turned to professional boxing after signing a multi-year deal with Queensberry Promotions. Singh will fight six times in his first year as a professional boxer.

“I’m excited to turn pro and looking forward to the new chapter."

Vijender Singh, India’s biggest amateur boxer, has announced he is now becoming professional, and will miss the 2016 Olympic Games in Rio as he launches his new career.

At a press conference in London on Monday 29th June 2015, Singh said that he had signed a lucrative multi-year promotional deal with Queensberry Promotions and IOS Sports & Entertainment.

The agreement will mean Singh will fight a minimum of six times in his first professional year, and this moment marks a new and exciting stage in his career.

The 2008 Beijing Olympics bronze medallist said at the media conference:

“I’m excited to turn pro and looking forward to the new chapter of my life.

“I want to train hard and perform for my country at the global level. My immediate goal will be to work hard and make a good boxing record in the next year or so.”

Singh has already gained his place as one of India’s most successful amateur boxers, winning Silver at the 2006 and 2014 Commonwealth Games and a Bronze medal at the 2006 Asian Games, He also won Gold at the 2010 Asian Games and was rated the world number one middleweight boxer in 2009.

His Bronze medal accolade at the 2008 Beijing Olympic Games was also an important moment in India’s sporting history, being the country’s first boxing medal in the Olympics. 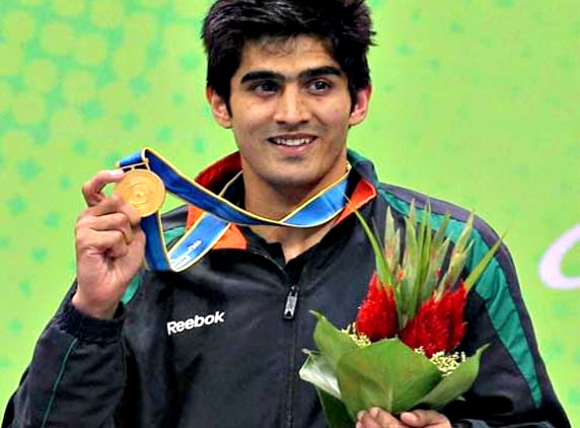 Singh’s potential to progress in boxing has been recognised by Francis Warren, son of the International Boxing Hall of Fame promoter, Frank Warren. Francis speaking to the media said:

“I’m very excited to have brought such a talented and determined individual over to the UK and can’t wait to see what Vijender is capable of doing the professional ranks after achieving so much as an amateur.”

Warren continued: “He has a clear idea of what he wants to achieve and I am over the moon that he will be doing that with Queensberry Promotions and BoxNation.”

The agreement between Singh and Queensberry promotions is an exciting one, as Queensberry is already responsible for managing over 40 professional boxing athletes. Producing 20 champions, the company has managed a number of boxers including Amir Khan, Chris Eubank and Ricky Hatton to name a few.

“He’s a top fighter and is extremely motivated to train hard and perform. Vijender will be the flag bearer for a nation of over a billion people.”

Singh, who is 29 years old and originally from the Haryana state in India, is now set to move to a training base in Manchester, in England. He will be working under the acclaimed boxing trainer Lee Beard, who was previously the coach of British boxing star Ricky Hatton.

With such an impressive team around him, Singh’s boxing career and development seems to be heading toward an exciting direction. Vijender Singh is definitely one boxer to watch out for in the next few years.