Indian Olympic boxer Vijender Singh, has faced controversy over police claims that the boxer took heroin on multiple occasions in his home-state of Punjab.

"We will not be testing Vijender for heroin."

Boxer Vijender Singh has been accused of acquiring heroin on at least 12 occasions from local drug dealers within the northern state of Punjab. Police admitted that they had “conclusive” evidence against the star.

A $24 million drug haul (approximately 1.3 billion rupees) was uncovered by the Punjab police after they seized 26 kg of heroin in March.

A Canadian drug dealer, Anoop Singh Kahlon, who is thought to have sold to Vijender, was arrested along with five other suspects. Police also said that Vijender was in regular contact with Kahlon.

A spokesperson for the Punjab police announced, “It has been established that Boxers Ram Singh and Vijender Singh took heroin from Kahlon and his aide Rocky for personal consumption between December 2012 and February 2013.”

Vijender became linked to the bust after his wife’s car was located outside the drug dealer’s property. Fellow boxer, Ram Singh was also linked to the crime.

“Vijender Singh consumed the drug about 12 times and Ram Singh about five times,” Punjab police reported in a statement over the weekend.

“However, they did not actively connive with the smugglers in their activities and nothing was recovered from them, as such both of them are not being arrested in the case at this stage,” they added. 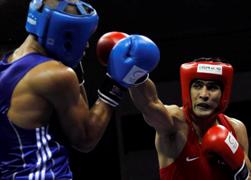 Vijender won a bronze medal at the 2008 Beijing Olympics, but he failed to qualify for the 2012 London tournament after being knocked out in the quarter-finals. He has openly quashed the claims by the Punjab police, slating them as “ridiculous”.

Police have since stated that Vijender has not complied with their wishes for the boxer to send hair and blood samples for testing. They have said they will file a court order against the star.

Friend and sparring partner, Ram Singh, admitted to taking the drugs with Vijender:

“We had taken very small quantity of drugs, less than two grams each. But we are not habitual takers of drugs and had tried it just for adventure. We did not intend to improve our stamina or performance by taking it.”

“Vijender was in touch with some Mumbai celebrities, who were regular in rave parties and took drugs. Therefore, we also tried it. However, we did not pay anything to Kahlon for drugs,” Ram added.

Following his confession, Ram has been expelled from his sports hostel by the National Institute of Sports (NIS), Patiala.

The National Anti-Doping Agency (NADA) announced that they would not charge or penalise Vijender as all of his alleged drug use had been done outside the competition.

“Heroin is a banned drug, but an athlete can be punished only if he tests positive in ‘in-competition’ testing,” said NADA Director, Mukul Chatterjee.

“Vijender is not training for any competition these days, so he cannot be penalised.” 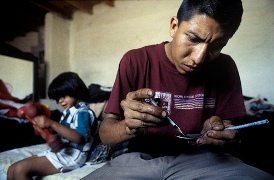 Sports Secretary, PK Deb, who is calling for the drug test to be taken said: “We have not asked NADA to proclaim anything on his guilt but just conduct a test to find out whether he took heroin… the NADA has not conveyed anything to us in writing, let them do that first and then we will think of our stand.”

The results, if found positive will not affect his standing as a professional boxer. NADA, however was adamant not to get involved:

“We will not be testing Vijender for heroin. We will strictly go by the NADA and WADA code. We are independent and will strictly follow the protocol for out-of-competition testing of an athlete irrespective of what the sports ministry has said.”

The Kahlon case is just one of numerous drug busts happening in Punjab. Drugs is a widely known issue in the Punjab. University studies in the area found that up to 70% of young Punjabi men were either addicted to drugs or alcohol.

Aisha an English literature graduate, is a keen editorial writer. She adores reading, theatre, and anything arts related. She is a creative soul and is always reinventing herself. Her motto is: “Life is too short, so eat dessert first!”
India win the Test series against Australia
Indian Premier League 2013 in Sixth Season