Satnam Singh has become the first Indian-born basketball player to be drafted into the NBA on June 25, 2015. He will play for the Texas Legends in the D-League.

"He was one of the better 3-point shooters that we brought through."

The Dallas Mavericks has selected Satnam Singh in the 2015 NBA draft, making him the first ever Indian-born player to be drafted into the world’s top basketball league.

Satnam was invited to join a pre-draft workout on June 23, 2015. Two days later, he became Mavericks’ 52nd pick in the draft held in Brooklyn and televised by ESPN.

He also makes history as the first to join the NBA without any experience in university, a professional foreign league or the Development League, commonly known as the D-League.

The 19-year-old from Ballo Ke in Punjab was obviously excited to be drafted by the 2011 NBA Champions. He also spoke at great length about the potential for more Indian presence.

With the 52nd pick in the 2015 #NBADraft, we select Satnam Singh Bhamara! #MavsDraft2015 http://t.co/dzh0x1XVsI pic.twitter.com/avhY0S5nzD

Satnam said: “I’m over the moon. I hope this opens new avenues for many more Indian basketball players in the future.

“The feeling is of course unreal, but it has happened and I feel that my entry will certainly open the doors for many aspiring basketballers in India to dream big.”

He continued: “The game will certainly grow in India in the coming years.

“You see the popularity of cricket now, but in the future basketball will also be popular back home.”

The 7-foot-2 centre has been playing at IMG Academy in Florida since 2010. It is also during this time that he learnt a great deal about the American culture and the English language. 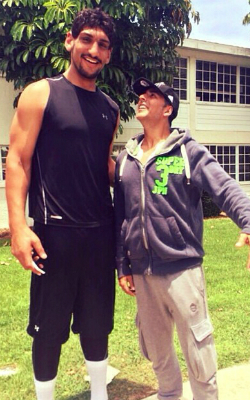 “I have watched Satnam grow up before my eyes and I am so proud of the many sacrifices and the hard work he has put in over the years.

“Not only on the court and in the classroom, but the enormous amount of time spent away from his family as well.”

Mavericks’ owner, Mark Cuban, highlighted Satnam’s physique was exactly what they were looking for and expressed high hopes for the young player, weighing 290 pounds.

Cuban said: “What we really liked about him was when he came in here, he really could shoot the ball. He was one of the better 3-point shooters that we brought through.

“He’s not the quickest guy going. But there’s a lot of guys that have made a living in this league that weren’t fast or quick that could block shots, protect the rim, bang and hit an open look. He’s going to get that shot.” 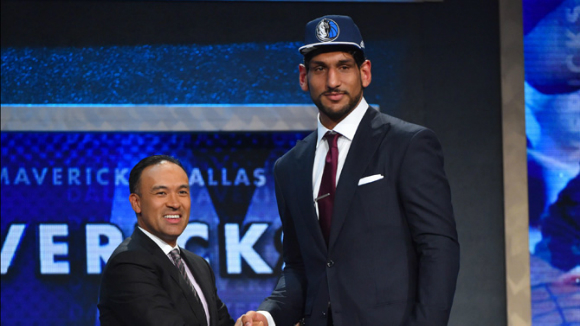 He will hope to follow in the footsteps of the Canadian-born Sim Bhullar, who was the first player of Indian origin to play in an NBA game for Sacramento Kings on April 7, 2015.

With Mavericks’ previous success in bringing China’s Wang Zhizhi from the D-League into the NBA, Satnam’s prospects are looking pretty good.

Satnam will tip-off his burgeoning career by playing for the Mavericks’ Summer League in Las Vegas in July 2015. He will then join the D-League’s Texas Legends, affiliated with Mavericks, when the season starts in November 2015.