Sim Bhullar became the first player of Indian descent to sign an NBA contract. The Canadian born basketball player, whose family is originally from the state of Punjab, signed a contract with the Sacramento Kings on 14th August 2014.

Still only 21, Bhullar showed talent at basketball from an early age.

Sim Bhullar has become the first ever player of Indian-origin to sign a contract with the NBA (National Basketball Association).

Bhuller inked a deal with  Sacramento Kings in the evening of Thursday 14th August, 2014. He is still only 21 years old, but has shown talent at basketball ever since he attended New Mexico State University.

The player’s family originally come from the state of Punjab in India, and migrated to Canada. It is reported that Bhullar’s father Avtar initially wanted Sim and his brother Tanveer to play cricket, a sport that is really popular in India.

Avtar himself grew up playing Kabaddi, which is a contact sport traditionally from Punjab. 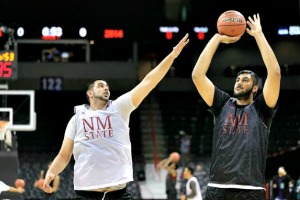 Avtar soon realised that his son’s height and movement would be more suitable for basketball. Bhullar is a massive 7-feet 5-inches tall, and Tanveer is 7-feet 3-inches.

Height is a great advantage on the basketball field, something which Bhullar found when he played for high school and college teams while growing up.

After beginning to play basketball in high school, Bhullar demonstrated his talent in the 2010 FIBA Americas U18 summer tournament. He came off the bench to achieve 14 points, 4 rebounds and 3 blocks. He contributed immensely when defeating the US team.

When it came to choosing a college basketball team, Bhullar originally decided to play for Xavier University in Cincinnati, but he changed his mind in August 2011 as he opted to play for New Mexico State Aggies.

During the freshman year, Bhullar played an average of 24.4 minutes each match, and improved his game throughout his time at this university.

In 2013, Bhullar also received a number of awards for his outstanding play for the Aggies, including WAC All-Newcomer Team All-WAC Third Team and All-WAC Freshman of the Year.

In 2014, Bhullar continued his rise to the top as he helped his team win the All-Defensive Team, and also individually won the WAC Tournament Most Outstanding Player award. 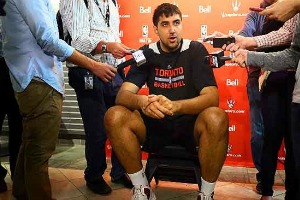 In April 2014, Bhullar decided that he was now ready to try and get into the NBA. He announced that instead of completing his final two years at college, he would declare for the NBA draft.

This was when the Sacramento Kings snapped Bhullar up, seeing the potential of his light touch on the ball combined with his tall stature.

In 2014, he was part of the Sacramento Kings’ NBA summer league team, which won the tournament in July 2014 in Las Vegas.

Bhullar will be playing his usual position of centre for the club, which is owned by Vivek Ranadive who is the first ever Indian-born majority owner in the NBA.

Whilst, emphasising the importance of recruiting more players of Indian heritage, Vivek said:

“I’ve long believed that India is the next great frontier for the NBA, and adding a talented player like Sim only underscores the exponential growth basketball has experienced in that nation.”

He continued, hoping that Bhullar could inspire more Indian-origin players:

“While Sim is the first player of Indian descent to sign with an NBA franchise, he represents one of many that will emerge from that region as the game continues to garner more attention and generate ever-increasing passion among a new generation of Indian fans.”

However, commentators warn that Bhullar’s height could prove as much of a disadvantage as an advantage.

Being able to adapt his body to the conditions of the NBA and competitive basketball will decide how long and successful his sporting career is.

Bhullar himself is very conscious of this: “Guys my size don’t have very long career and you have to take advantage of it and do the best you can with the time you have to play. 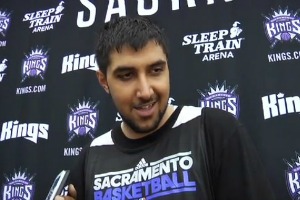 “I didn’t want to get hurt in another college season and ruin my chances. And I’m not the kind of guy that’s doing it just to make money right away; I just want to play at the highest level.”

It will be interesting to see if Bhullar can use height to his advantage throughout the coming NBA seasons.

Currently, he is listed as weighing 355lb but if he can become lighter, Bhullar will be able to move faster.

It will be intriguing to watch Bhullar’s career and see if he manages to bring his game together and turn into the winning player that the Sacramento Kings clearly think he can be.

Whatever he does after this contract, Bhullar’s initial achievement in reaching the NBA should not be underestimated.

No other player of Indian origin has even come close to achieving an NBA contract, and he has the potential to be an inspiration to many young Indian-Americans.

Eleanor is an English undergraduate, who enjoys reading, writing and anything media related. Aside from journalism, she is also passionate about music and believes in the motto: “When you love what you do, you’ll never work another day in your life.”
India vs Pakistan Football Series 2014 ends 1-1
Michael Chopra to play in Indian Super League