Robin Singh’s goal helped India defeat Pakistan 1-0 in the opening game of the JSW series 2014. In the second and final match Pakistan claimed a historic 2-0 win against India, as the two match friendly series finished 1-1.

"It doesn’t matter whether the series was big or small, this was like the World Cup for us."

Any clash between Pakistan and India creates a lot of hype and buzz. The arch-rivals faced each other in two under-23 matches at the Bangalore Football Stadium on 17th and 20th August 2014.

India came on top in the first game despite being reduced to ten men. The Men in Blue defeated Pakistan 1-0, courtesy of a 70th minute goal from Robin Singh.

Pakistan bounced back strongly in the second match as they stunned India 2-0 to level the two match series 1-1. Kaleemullah and Saddam Hussein scored for the visitors.

Following a nine-year hiatus, India took on Pakistan in a friendly series hosted and organised by the JSW Group. 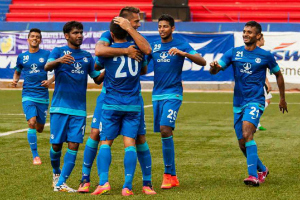 This was the first bilateral series between the two teams since 2005, when India last visited Pakistan for a three-match tour.

Both teams used this series to prepare for the 17th Asian Games, which are being held in South Korea from 19 September to 04 October, 2014.

While India went into the series as favourites, they knew that Pakistan would give them a run for their money, considering the tension amongst the two teams.

This was a football battle between India’s Blue Tigers and Pakistan’s Green Shaheens. Leading up to the games, Indian skipper, Sunil Chhetri said:

“Every time the two countries play against each other in any sport it may be, the mood stays different. And however hard, you may try to evade it you can never ignore this fact.”

“We would like to give our best and it applies to our friends from Pakistan as well. For them too, this is a special game. An Indo-Pak clash is always special,” revealed the striker. 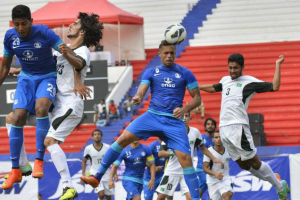 “We can bring people closer with sports and football also has that power.”

Robin Singh’s fantastic header deflected by captain Sunil Chhetri gave India the lead just at the stroke of half time against the Green Shirts.

However it was a mixed day for twenty-four year old striker, Robin Singh who was sent off in the 70th minute after receiving his second yellow card of the day.

With India down to ten men, Pakistan began to create more opportunities. The Green team had a good chance to equalise in the 84th minute, but captain Kaleemullah shot the ball wide of the goal.

Towards the end, Team India had a few challenging moments, but the home side held their nerves to completing a 1-0 victory.

“I am overall happy with the game. Pakistan started better but we took it over and had a lot of possession.”

He continued: “The atmosphere in the stadium was simply electric. This is what football is all about. It’s about the fans.”

Having won the first game by a solitary goal, India was targeting a series victory against Pakistan.

Held at the same stadium, the second match of Pakistan’s tour to India started at 3:30pm on 20 August, 2014. Despite being a working day, there was a decent crowd in the stadium. 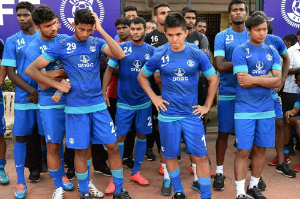 Chhetri of India had the first real chance of the match, but his goal bound shot was brilliantly parried away by Pakistan goalkeeper, Muzammil Hussain.

India dominated the match early on in terms of control and chances. But they failed to take the opportunities that came their way.

Those missed chances, came back to haunt the home side. Pakistan skipper, Kaleemullah gave his side the lead with a beautifully floated free kick seven minute before half time.

With India desperately looking for an equaliser, Pakistan almost caught out the Indian defence, resulting in a good save from goalkeeper Arminder Singh.

Pakistan ranked a few places below India sealed the win in the end as striker Saddam Hussein added a second goal in the 90th minute. 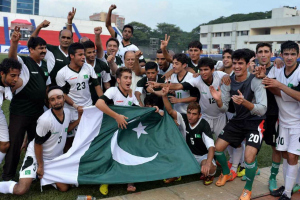 Hence Pakistan won the match 2-0 to tie the two match series 1-1, leaving the home crowd shocked. This was Pakistan’s first win against India since 2005 and first ever on Indian soil.

“It doesn’t matter whether the series was big or small, this was like the World Cup for us. Being the captain of the squad, I knew it’s going to be important to deliver the results against India, I had to take the responsibility.”

While it was only a friendly series, it would have been great if the tour consisted of three matches – Something the organisers should contemplate for the future.

With football being a popular sport and England having a large South Asian population, the time has come to think about hosting a three match series in the country. This would make for a very exciting series on neutrals grounds.

Faisal has creative experience in the fusion of media and communication and research which increase awareness of global issues in post-conflict, emerging and democratic societies. His life motto is: "persevere, for success is near..."
World Kabaddi League 2014 in Birmingham
Sim Bhullar first NBA Player of Indian Origin