Week 2 of the World Kabaddi League (WKL) 2014 was held at the LG Arena in Birmingham, comprising of four matches over the weekend. Khalsa Warriors maintained their lead at the top on points difference, followed by Lahore Lions of Pakistan in second position.

“All the players were great, but our team played well, which gave us the victory.”

Week 2 of the World Kabaddi League (WKL) visited the city of Birmingham, with two matches each held on 16th and 17th August 2014.

Kabaddi lovers around the world got to witness four entertaining matches on the weekend. Kabaddi players and officials received great hospitality from the crowd present inside the LG Arena.

Singer Angrez Ali kicked off the weekend proceedings with a performance on Kabaddi. 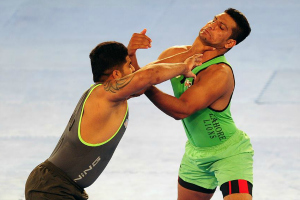 The first match of week 2 was between Lahore Lions and Royal Kings USA.

Shafiq Ahmed Chisti got the first touch against Royal Kings to earn Lions their first point.

A good stop from Lahore Lions gave them an early initiative, before captain Babar Waseem completed yet another successful raid. It was a terrific start from the Pakistan team as they went 3-0 ahead inside the first minute.

But Royal Kings came back to level 7-7 as the Lions failed to control Gurlal Singh from underneath.

Babar lost a close point on 12-12, which created some tension between both teams, as the Kings went ahead by one point. At 14-16 down, Lions finished the first quarter level with a raid from Chisti, followed by a stop of Balram Singh.

Though Royal Kings were physically the stronger of the two sides in the first quarter, the experience of Lahore Lions was quite evident in the second, third and final quarter. 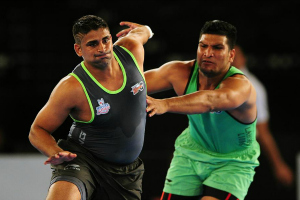 Lala Ubaidullah, Chisti and Babar accomplished some fine raids and stops as the game finished 62-50 in Lahore Lions favour.

At the end of the match, a delighted Babar Waseem said: “We are very happy, the hard work of the boys was displayed on the ground.”

Chisti who achieved nineteen successive raids was awarded man of the match. The team from Pakistan came up with an excellent performance on the day.

Manminder Sigh opened the scoring for Yo Yo Tigers, before Sucha Singh replied with a touch and point for the Canadian side. The match continued with successful raids from each side.

But at 8-9 down, Hardeep Singh held down Sucha Singh brilliantly, as the Tigers opened a two-point lead.

Stoppers such as Jagdeep Singh Kaka turned the game around during the latter stages of the first quarter, as Yo Yo led by 17 points to 15.

Yo Yo gradually increased their lead in the remaining three quarters as they registered their first win of the League by 69 points to 57. This win will give them a lot of confidence in the coming weeks.

The Tigers were deserved winners as they attacked and defended well throughout the match. Yo Yo Honey Singh will be pleased with they way they fought back after suffering a defeat in week 1.

Captain, Manminder Singh who received the player of the match award said:

“The conditions were different here as opposed to India. It was fun playing on the mats.”

Day four of the WKL featured California Eagles against Punjab Thunder in the first game.

Rana Alishan from Chichawatni in Pakistan stopped the Eagles on their first raid. The twenty-one year old grasped his opponent Malkit in a wrestling hold, which was impossible to escape from. This was a sensational start from Punjab and Rana. 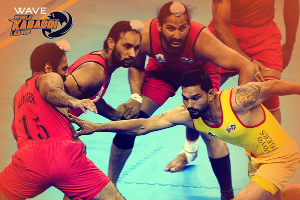 By the fifth minute, Punjab consolidated further with a 10-5 lead, courtesy of another stop from Rana. Shan completed a beautiful wrestling manoeuvre to stop Eagles, Parneek Singh.

Punjab went 18-11 up after the first quarter and finished half time with an eight-point lead at 33-25.

In the third quarter, the in-form Balkar Singh stopped Khushdeep Singh Tinku as the Eagles briefly clawed back to 28-33.

But the next raid saw Rana returning the favour, stopping Gurjeevan Singh with another strategic wresting move. With Punjab 34-28 up, Alishan had a stopping strike rate of 57%.

Punjab claimed 16 points, whilst conceding 11 in the last quarter as they won by 65 points to 48. It was a clinical team performance from Punjab, led by captain and best stopper, Yadwinder Singh (9 stops).

At the end it was good to see, Eagles Anil Kumar back on his feet after suffering a back injury.

Sarabjit Singh was an outstanding raider for Punjab, converting 20 out of 24 raids. Punjab Thunder star stopper and man of the match, Yadhwinder Singh, speaking to the media said: 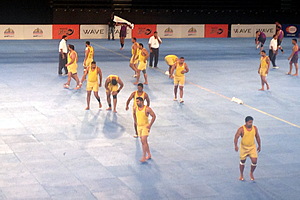 “All the players were great, but our team played well, which gave us the victory.”

The second match on Sunday was a truly Bollywood affair between Akshay Kumar’s Khalsa Warriors and Sonakshi Sinha’s United Singhs, the first UK derby of the WKL. This was the eighth game of the tournament.

Warriors captain Gurmeet Singh won the toss and decided to raid. As predicted the game started very aggressively, with Khalsa Warriors leading 13-11 after the first quarter.

Warriors then opened up a big margin of 34-20 following a brilliant raid from Gagandeep Singh, before United’s Shafiq Butt was stopped in the final raid of the second quarter.

In the final two quarters, Warriors went from strength to strength as they won the game by a record twenty-five point margin of 69-44.

Gopi was a great stopper for the Khalsa Warriors. Jasmanpreet Singh was declared man of the match for his nineteen successful raids.

The weekend matches ended the UK leg of the tournament, with the League heading next to Asia and North America before the final, which takes place in Lahore, Pakistan.