PUMA and Arsenal have come together to launch the new kits for the club in Bangalore, India. Former Sweden International, Freddie Ljungberg unveiled three new kits for Arsenal’s Home, Away and Cup games. The Sports Company also showcased Arsenal’s rich history through a ‘Tunnel of Time’.

"Arsenal Supporter Clubs in India are among the biggest in the World."

Sportswear giants, PUMA have unveiled three new kits of Arsenal Football Club in Bangalore India. The company has also created a piece of history by setting up ‘PUMA’s Arsenal Tunnel of Time’ museum in the Silicon Valley of India.

The launch event was held at the iconic UB City Building – Oakwood Suite. The ‘Tunnel of Time’ was open to visitors from 13 to 17 August, 2014.

In a move that recognises the marvellous support that the club receives from the Indian subcontinent, Arsenal and PUMA created a unique experience for fans to enjoy.

Whilst the launch of the kits was an event in its own right, the ‘Tunnel of Time’ aimed to give an in-depth look at the Gunners illustrious history. 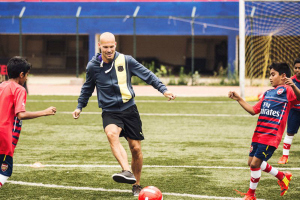 The 2014 FA Cup champions had their latest piece of silverware on show, as well as the Premier League trophy and The Invincible trophy, which was awarded to them for their unbeaten season of 2003-2004.

Signed memorabilia and Arsenal relics were presented, giving a chance to the Indian fan base to soak up the huge history of the club.

Former Arsenal winger Freddie Ljungberg was present in Bangalore to launch the new kits. He also gave eleven lucky Gunners a tour around the ‘Tunnel of Time’.

As the club ambassador, Ljungberg has been developing young talent at the grassroots level.

During his to trip to India, he engaged with players from Bengaluru FC, a PUMA sponsored team as well as meeting students from Arsenal soccer schools in the country. 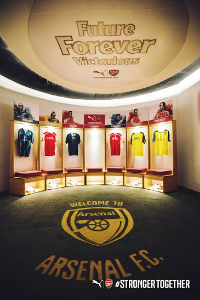 “It’s great as a former Gunner to see how loved and celebrated the club is in India. Indian fans know a lot about the Club and the Arsenal Tunnel of Time by PUMA is an incredible tribute to the legacy of the club and its ever-exciting future.”

The unveiling of Arsenal’s new kits celebrated a landmark partnership deal between the club and PUMA. It ended Nike’s iconic association with the club, which lasted twenty year’s.

The five year agreement will see the club earning a huge £150 million, making it the most valuable deal in the Premiership.

PUMA’s Managing Director, Rajiv Mehta who was in India to launch the new kits, spoke about the new deal:

“We are very excited to be associated with a club as legendary and historic as Arsenal. Arsenal Supporter Clubs in India are among the biggest in the World, and the club boasts a massive following here. Gooners have already bought out the Arsenal jerseys from PUMA Stores around the country and we’re thrilled to be a part of this journey with them.”

This so called journey has seen shirt sales increase around the whole of India.

Fans are able to purchase the kits nationwide, with PUMA stores located in Dehli, Bangalore, Mumbai, Pune and Goa. The new kits can also be bought online at www.pumashop.in. 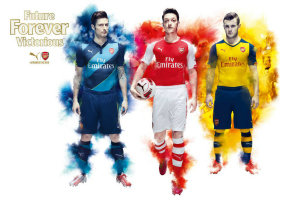 PUMA has designed three kits, which reflect Arsenal’s core values as a football club. The three kits represent the ‘Future, Forever, Victorious’ story that help to form the basis of the club.

Arsenal’s home strip remains traditional with its colours of red and white.

For the away shirt, the Gunners will be sporting the historic yellow and blue, the kit they wore when winning the FA Cups in 1971 and 1979 and the famous 1989 Division One title.

The third kit, which will be worn for all away Cup games, features dark and light stripes with a lime pinstripe running through it.

One Arsenal fan said of the new kit: “It’s great that Arsenal have teamed up with PUMA. It’s refreshing and hopefully a sign of bigger things to come for the club. As for reaching out to Indian fans, I think it’s brilliant that they can appreciate the club like we can here.”

PUMA has also linked up with popular online fashion website myntra.com in an enterprise that is set to bring rich rewards.

“It’s a huge honour to be involved with one of the most successful clubs in English football. We are excited to launch PUMA’s exclusive Arsenal collection at a time when the football fever is at its peak, creating more demand for our exclusive World Cup store.”

He continued: “With the launch of original Arsenal merchandise, we are actively engaging shoppers who live by the game and aim to create a strong brand loyalty.”

There are forty-three Arsenal related products on offer, including thirty-four styles to choose from. Prices range from Rs 599 – Rs 12,999.

The launch has been a huge success and has helped to create a positive aura surrounding the Arsenal Football Club.

The launch of the new kits and PUMA’s ‘Arsenal Tunnel of Time’ has really given an important insight to Arsenal fans in India.

This partnership will hopefully expand Arsenal’s appeal in the subcontinent and come the end of the season, PUMA could be dealing with the new Premier League champions.