India and Pakistan have unveiled new kits for the ICC Cricket World Cup 2015 in Australia and New Zealand. DESIblitz reports.

“We feel socially responsible wearing this kit and we are doing our bit for the environment.”

Both the India and Pakistan cricket teams will be wearing new kits during the ICC Cricket World Cup 2015.

The Board of Control for Cricket in India (BCCI) and kit manufacturers, Nike, unveiled Team India’s new One Day International kit at the Melbourne Cricket Ground, on Thursday 15th January 2015.

The kit produced by Nike has been designed keeping the players’ needs on the field in mind.

Captain Mahendra Singh Dhoni said: “The new Team India uniform is light, comfortable, and packed with innovation, to help minimise distractions on the field of play.

“And that’s crucial when millimetres make a difference between a game-winning innings or wicket.”

Forward-thinking Nike designers have also considered environmental issues for this uniform by using 100 percent polyester. It is said that each kit (shirt and trousers together) has been made out of an average of 33 recycled plastic bottles.

Ravichandran Ashwin, India’s leading spinner, said: “We feel socially responsible as a unit wearing this kit and we are doing our bit for the environment.” 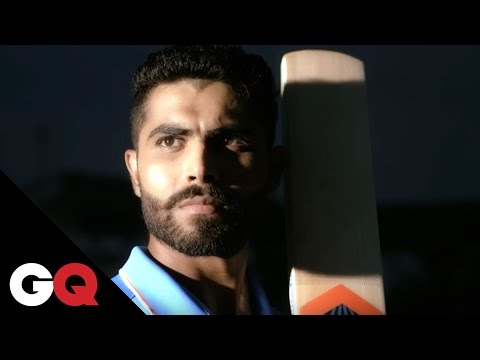 The overall look of the new jersey is not too dissimilar from those in the past. The usual blue colour is the predominant feature. This year’s shirt again has the modern menswear collar, similar to the 2011 shirt.

It also has “INDIA” written in bold along the middle in the proud bright orange. The shirt bears the BCCI logo on the left side with the famous Nike tick on the right.

But one new feature that captain Dhoni is particularly proud of is the strands on the front of the shirt. He said: “The strands that are drawn in the front are out of our national flag (the 24 lines in the Ashok Chakra) and it gives a bit of a feel to it.”

He added: “The Team India jersey truly symbolises the passion for cricket in our nation. Wearing this jersey is a matter of pride for every player.” 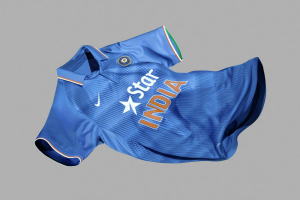 Virat Kohli, captain of India’s test team said: “A consecutive World Cup win would be a nice milestone to have in the new jersey. That’s what we will aim for in the next two months and have a vision for.”

There were mixed reactions on social media platforms as excited fans wanted to see what their heroes would be wearing for this years’ campaign. Comments such as ‘cool jersey’, ‘very attractive’ and ‘so nice’ were common.

Many fans did notice however, that the new shirt design does not include the Tri-colours (Triranga) of the Indian flag.

Comments such as ‘missing Indian flag symbol’ and ‘Nike design is not perfect. Where are the tri colours?’, were just some of the remarks made by fans. Some felt the strands, loved so much by Dhoni, did not show enough national pride.

Perhaps these feelings will change if the boys in blue go on to win the title in March!

The Team India kit is available to buy from Nike.com.

Pakistan’s kit was unveiled at an event, organised by team sponsors Pepsi, at the Royal Palm Golf and Country Club in Lahore, on Wednesday 14th January 2015.

The Pakistan kit is designed by the famous cricket brand CA Sports, based in Sialkot, Punjab.

The new designs were leaked across news channels the day before, which built up anticipation for the launch.

The players engaged in some light-hearted fun when Shahid Afridi was joined by the rest of the team for a large group selfie to show off the new kit.

Like India, the Pakistan team have gone with a similar design to previous shirts. They have used the lighter green colour which was worn by the team that won the World Cup in 1992 under Imran Khan’s captaincy.

However, the crescent and star that was on the previous World Cup shirt (2011) has been removed. 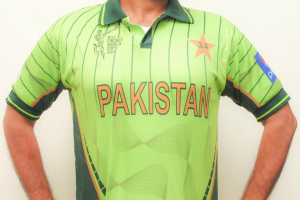 Straight dark green lines have been added to the front and back of the shirt. But they seem to hold little importance unlike those in the Indian shirt.

“PAKISTAN” is written in gold and outlined in black. The same design is used for the name and number on the back of the shirt.

The fans are also hoping the green shirt brings them more luck. The main topic of discussion on social media sites is the resemblance of the 2015 shirt colour to the 1992 shirt colour.

Unlike Indian fans’ split reaction, the general feel from Pakistani fans seems to be very positive. Typical comments from fans have been ‘our pride’, ‘awesome’, and ‘lovely green kit’, which have posted on photos and discussion boards online. 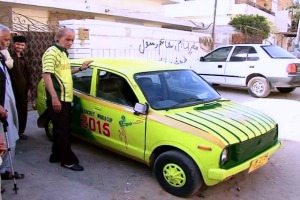 One super-fan has gone so far as to paint his car in the same colours as those of the shirt. He has even added the stripes, the World Cup logo, and the golden star!

Let’s hope the boys do him proud!

The new Pakistan kit can be purchased from Daraz.pk.

The other countries have also unveiled their own new kit designs. Australia are wearing the iconic “gold” (canary yellow) of recent years and England are wearing navy blue with hints of red.

Sri Lanka will sport the traditional blue and yellow, and Bangladesh will wear green with red. Afghanistan will debut with blue with red, yellow and black.

Win or lose, the teams at this year’s ICC Cricket World Cup will certainly be looking dapper!