The World Kabaddi League (WKL) kicked off in spectacular style as a star studded line up thrilled the crowd at the O2 Arena in London. Following the first weekend of matches, Khalsa Warriors owned by Akshay Kumar lead the points table..

“We are very excited to be here in London for the opening of the World Kabaddi League.”

The World Kabaddi League (WKL) got underway on the weekend of Saturday 09th and Sunday 10th August 2014, thrilling all the kabaddi lovers across the globe.

Stars from Bollywood and a LIVE DJ entertained the capacity crowd at the O2.

There were many VIP’s and dignitaries inside the arena, including the Deputy Chief Minister of Punjab and President of the WKL Sukhbir Singh Badal, former Indian hockey captain and Commissioner of WKL Pargat Singh and Keith Vaz, Member of Parliament for Leicester. 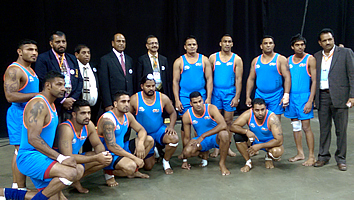 Delighted to be in the Capital, Pargat Singh said: “We are very excited to be here in London for the opening of the World Kabaddi League and are hoping that the fans will enjoy the sport of Kabaddi.”

Both teams defended very well as the first quarter ended level on 11-11. United’s star raider Gurinder Singh started to overpower the stoppers of Punjab as he helped his side take a 30-26 lead into half-time.

In the third quarter both teams produced some fine raids and stops, but United Singhs increased their lead by ten points to 49-39.

As the fourth quarter progressed raiders from Punjab, Anil Kumar and Tinku tried to claw some points back but United Singhs held on to win the game 68-51. 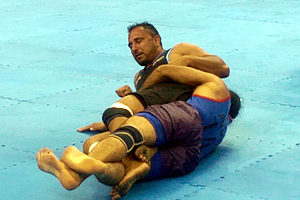 Sandeep Singh of United Singhs was declared man of the match.

The second game saw Khalsa Warriors beat Yo Yo Tigers 79-57.

Khalsa Warriors led by star raiders Gagandeep and Gurmeet Singh backed by stopper Gurpreet took their side into a first quarter lead of 21-15.

The Tigers came back fighting, but the experience of the Warriors saw them take a ten point advantage heading into half time.

The Warriors took a thirteen point lead into the final quarter, outwitting and outplaying their counterparts, eventually winning the game 79-57. Khalsa Warriors Gurmeet Singh was named man of the match. 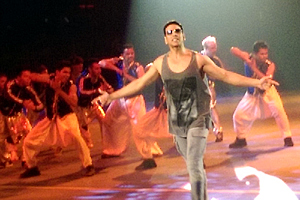 Bollywood star Akshay Kumar later went onto the stage, performing for the 500th time. He opened with an aerial sequence which included a series of mid-air somersaults.

Playback singer Sukhwinder Singh later belted out some of his songs including the kabaddi anthem.

“It is such a huge opportunity for us. Our government was very cooperative in giving us the requisite clearances and it has been a fantastic experience to be a part of the league.”

The first quarter ended with Lahore Lions taking a slight lead of 21-15. 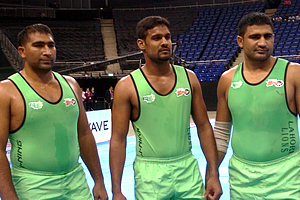 Whilst Vancouver struggled defensively, Lahore raiders Akmal Shahzad Dogar and Shafiq Ahmad Chisti took the game by the scruff of the neck as the team from Pakistan increased their lead to 42-31 in the second quarter.

Vancouver Lions tactical game seemed ineffective as Lahore Lions maintained a massive lead by the end of the third quarter.

In the final quarter, Chisti and Dogar continued their dominance to help the Lahore Lions triumph 74-61.

At the end of the match, Lahore Lions captain, Waseem Gujjar said: “We arrived late last night because our plane was delayed and we had left a few players behind. But today we played a good game and I am very proud of my team.”

Shafiq Ahmad Chisti of Lahore Lions was named man of the match.

In the final game of the weekend, Royal Kings USA defeated California Eagles 66-60. 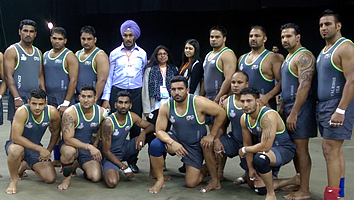 Eagles’ raider Baldev Singh delivered some fierce attacking, whilst Harwinder Singh from the Royal’s made some mammoth stops. The Eagles took a one point lead to finish 16-15 at the end of the first quarter.

The second quarter was pretty much the same as the first with the Eagles holding their slender one point lead, 31-30.

The final two quarters saw both teams pressing on, with an aim to win the game. Eagles, Balkara Singh slammed down the power packed raids of the Kings.

Baldev Singh and Parneek Singh did attack for the Eagles, but it was not enough as the Royal Kings USA held on to win the game 66-60. Balram Singh of Royal Kings USA received the man of the match award.

At the end of the first weekend four teams shared the top spot with Khalsa Warriors leading the pack on points difference. It was a successful start to the World Kabaddi League as the crowd got to witness some really good matches.

The World Kabaddi League moves to Birmingham on the weekend of 16th and 17th August 2014, with fans hoping to see some more exciting kabaddi matches.