It was double glory for India as both the men and women lifted the 2014 Kabaddi World Cup. The men’s team triumphed over arch-rivals Pakistan 45-42, whilst the women’s team defeated New Zealand 36-27 in the final.

Fans got to see a sensational ending in the men’s final as India beat Pakistan 45-42 at the Guru Gobind Singh Multipurpose Stadium on Saturday 20 December 2014.

This was India’s fourth triumph in the final against Pakistan.

The Pakistan camp though lamented the organisers of foul play, lodging an offical complaint and threatening not to participate in future tournaments in India.

Both India and Pakistan qualified quite comfortably for the men’s final. India had convincing wins over USA, Spain, Iran and Australia to finish top of Pool A. 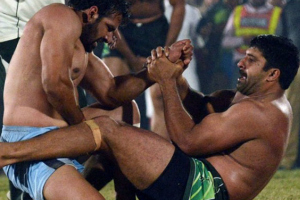 Pakistan saw off England, Canada, Denmark, Sweden and Argentina to top Pool B.

In the semi-finals, India defeated England 54-33. Pakistan thrashed Iran 56-28 to set up a mouthwatering final against their arch-rivals.

At the end of the first quarter the match was nicely poised at 11-11. The second quarter saw Pakistan take a slight advantage as their captain Shafiq Ahmad Chisti led the charge to take his team into a 23-20 lead at half-time.

It continued to be a close fought match as Pakistan remained in front at 34-31 by the end of the third quarter. 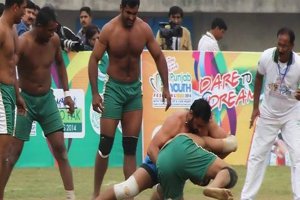 The Indian duo of Sandeep Singh Surakhpur and Sandeep Luddar were successful raiders for the home team, with Chisti and Mohammed Irfan attacking for Pakistan.

The crowd were at the edge of their seats as this nail biting game moved into the final quarter. India knew they had to up their game to overcome a resilient Pakistan side.

Pakistan on the other hand were hoping to keep things tight and hold onto their lead.

In the final quarter, India quickly levelled at 36-36 as the pulsating game headed towards a thrilling finish.

Pakistan regained a healthy four point lead in the closing stages of the game. With Pakistan on the brink of victory, there was a final twist in the game.

The match finished in dramatic fashion as India not only levelled the match at 41-41, but went onto to clinch their fiftth consecutive title 45-42 causing absolutely mayhem inside the stadium. 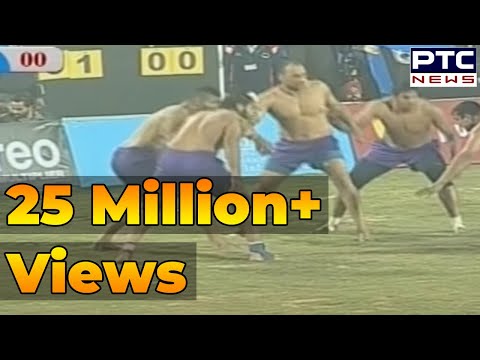 Pakistan were left frustrated at the end of the game as they felt they were handed a raw deal, claiming the organisers were biased.

As India celebrated their victory, a furious Chisti said:

“The organisers played a partisan role. The match was stopped three minutes before the scheduled close to ensure the Indian team’s victory.

“The Indian players were applying mustard oil to their bodies so that we would fail to get hold of them. We were also not allowed to drink water.”

“If this is the way the matches are going to be played and decided, we will not participate in the tournament,” added the Pakistan captain.

Whilst dismissing the allegations made by Pakistan, Deputy Chief Minister of Punjab and member of the Organising Committee, Sukhbir Singh Badal said:

“No unfair means were used but we will look into the issue.” 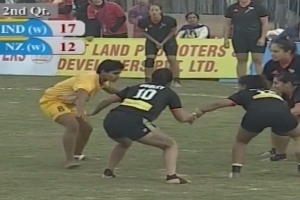 At the post match ceremony Pakistan players initially refused to accept the runners-up trophy and prize money, before Punjab Kabaddi Association President Sikandar Singh Maluka assured the losing finalists that the matter would be investigated further.

After a lot of protesting, Pakistan eventually did accept the prize money and collected their trophy from Punjab Chief Minister Parkash Singh Badal.

In the women’s final, India defeated New Zealand for the second time in a row. The 36-27 win made them richer by a crore. 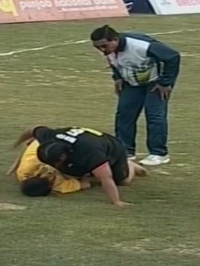 The best raider and stopper for New Zealand were Lani Perese and Tito respectively. Each player walked away with 100,000 rupees.

India has clearly dominated the World Cup for many years now. Earlier this year both the men’s and women’s team won Gold at the Asian Games as well.

As we head into 2015 the question on everyone’s mind will be Can anyone stop India – Well only time will tell if Pakistan can break the shackles and finallly overcome their biggest rivals at the game.