“They (Kolkata) were trying to defend and take it to extra time, and they got one chance and they finished it.”

The match seemed to be heading towards extra time, but Mohammed Rafique who played only five minutes of the ISL final scored a fairy tale winner in added time.

Apoula Edel was terrific in goal for Atletico, saving Kolkata on quite a few occasions.

On finals day a closing ceremony full of colour and glitz was followed by celebrities meeting the players. 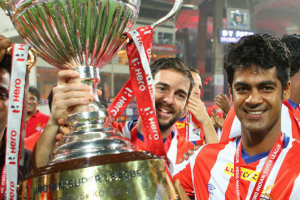 Kolkata’s experience gave them the edge ahead of the final, having played as a strong unit over the last two months.

Like in all other matches, Kolkata fielded a defensive team to win the match. Taking no risks, Kolkata left the influential Luis Garcia on the bench as he was nursing a niggling hamstring injury.

Even though Kerala had much of the possession during the match, Kolkata were better physically and technically as they survived quite a few onslaughts from the men in yellow.

Whenever Kerala went on the attack, Kolkata kept it tight through some good defending at the back. Former Liverpool defender, Josemi one of the fittest players on the pitch was like a rock for Atletico.

Josemi and his co-defenders kept the likes of Stephen Pearson, Iain Hume and Ishfaq Ahmed at bay.

The experience of Borja Fernandez was very crucial in the midfield. The Spanish footballer not only supported the defence of Kolkata, but also made a few healthy runs on the counter attack. 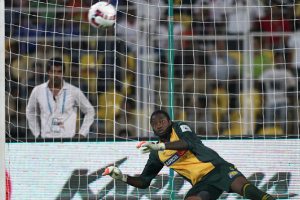 Kolkata’s goalkeeper, Apoula Edel proved to be a key difference between the two teams. Edel got his geometry right from the word go as he made some fine saves throughout the match.

In the 11th minute, Edel did well to pouch the ball from a left footed shot by Ishfaq, which travelled fast towards him.

Edel made a telling save in the 40th minute, when he stopped a dipping ball heading towards the left corner from a Iain Hume free kick.

After the break, Edel’s goalkeeping skills continued. In the 50th minute Apoula dived and pouched the ball, following a dangerous cross from Pearson on the left hand side of the 18-yard box.

The best of Edel’s goalkeeping came in the 83rd minute when he made an outstanding save from Michael Chopra. Chopra’s magnificent strike from close range was denied by Apoula as he dived to his left to make a superb save. 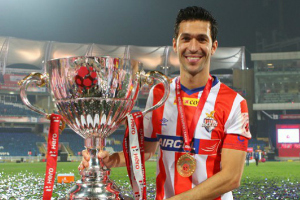 This was a key moment of the match. Edel was like a wall for Kerala, a wall which he guarded very well.

Kolkata striker Arnal Llibert was a major threat to the opposition. Kolkata deserved a penalty when Arnal was fouled in the penalty box, but the referee thought otherwise.

This decision alongside Edel’s brilliance was a sign that Kolkata were destined to win the ISL.

With only a few minutes of added time left, the most pivotal moment for Kolkata in the ISL arrived.

Kolkata’s super sub striker, Mohammed Rafique, a man who had only played five minutes of ISL football prior to the final did the unthinkable.

The most unlikely hero, became the hero when he headed the decisive goal in stoppage time. Rafique the shortest man on the pitch hit the target after receiving a tremendous corner kick delivered by Pody.

It was quite sensational that it was an Indian who got the winning goal. Rafique deservedly received the Hero of the Match award.

Whilst praising Edel for receiving the Swift Moment of the Match award, former Indian footballer, Baichung Bhutia said: “He’s really given the trophy to Kolkata.”

Speaking about Kolkata’s tactical strategy, Bhutia added: “They (Kolkata) were trying to defend and take it to extra time, and they got one chance and they finished it.”

Luis Garcia who did not feature in the match was delighted with the win saying: “To win the first tournament gives me a great feeling. The team played well and deserved to win.”

Having dominated possession for most of the game, Kerala Blasters will feel very disappointed with the result. But as they say goals win you matches and that is exactly why Kolkata won the title.

Kolkata might not have played the most attractive football, but as a team they were very resilient.