The Indian Super League was impressed and inspired by the English Premier League during a recent visit to England, as part of their strategic partnership.

“It was a great opportunity to learn from one of the world’s great clubs and how they engage their fans.”

After a fruitful first season, the Indian Super League (ISL) has paid the English Premier League (EPL) a visit to find out how to improve its game.

Representatives of the ISL and its clubs visited England to take part in knowledge-sharing workshops with one of the most successful leagues in the world.

Organisers sought to get the most out of the trip by visiting Premier League headquarters in London.

They are joined by Bollywood actor and NorthEast Utd’s owner, John Abraham.

They also met with three English football clubs to explore expertise in nurturing and growing a high quality football competition.

Their first stop was the Premier League offices, where they discussed governance, youth development and community development amongst other things. 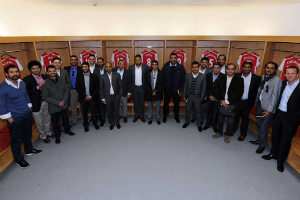 Then, they went to Selhurst Park to speak to the executive team of Crystal Palace about how to structure a successful football club and better engage fans.

Crystal Palace chief executive, Phil Alexander, said: “The exercise was extremely useful for both groups and we aim to continue the new relationship we have forged with Indian clubs.”

Their next stop was the Emirates Stadium, where they met with Arsenal’s communications and marketing team to understand how to work with the media and build a club brand.

Andy Knee, the football vice-president at IMG, said: “The Indian Super League and its eight clubs enjoyed a very educational and inspiring visit to Arsenal.

“With a fantastic first season now behind us it was a great opportunity to learn from one of the world’s great clubs as to how they connect with and engage their fans.”

Last on the agenda was a visit to West Bromwich Albion. They looked at the club’s youth academy and the development pathway that players take from grass roots to the first team.

Mumbai City chief executive, Indranil Das Blah, said: “We were extremely impressed with the focus West Bromwich Albion has towards the future while not forgetting their long history.”

He continued: “Be it the club’s digital engagement, the elite coaching centre or the community programme, everything we saw during our trip to the club left us inspired.”

The EPL is no stranger to hosting league delegations from around the world. 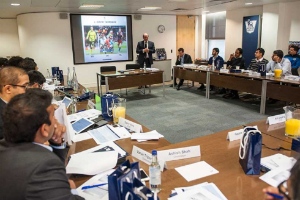 In December 2014, heads of the Chinese Super League and directors from its leading clubs visited England as part of their long-term formal partnership.

They were keen to find out how the league is run and how the clubs achieve worldwide popularity and commercial success.

Collaborative ties between the Indian Super League and EPL began when they signed a strategic partnership in June 2014.

The alliance is a significant move for both leagues, as the EPL harbours the interest of almost 90 million Indians aged between 16 and 69.

With India also being the third biggest market for the EPL on Facebook and television ratings, we shall see the ISL’s continuous improvement through their meaningful exchanges.