Wasim Khan MBE is an influential cricket administrator who continues to break the boundaries. From Warwickshire U13s to CEO of Leicestershire County Cricket Club (LCCC), his impact has grown immensely in the corridors of cricket.

“When you're involved in sports development you do it for the love of what you do."

Wasim Khan MBE is a former first class cricketer of British Asian origin. After retirement, he has continued to make waves all the way through to boardroom level.

From being spotted at the age of twelve to leading crickets biggest charity, Wasim is now the Chief Executive Officer (CEO) of Leicestershire County Cricket Club (LCCC). Khan has clear intent on sprinkling his magic over Leicestershire’s poor fortunes.

Shortly after Wasim’s family moved from Kashmir in the early 1960s, cricket had been engrained in his blood. Born on 26 February 1971 in England, it wasn’t long before the British Pakistani youngster was practicing his slog on the streets of Birmingham.

Picked up by Warwickshire U13s as the only state school boy, Wasim went onto to be top scorer and captain in the early days of his career. This proved to be a huge self-confidence boost for the fresh faced Khan, making the transition to first class cricket with ease.

Following a county championship triumph with Warwickshire in his debut season in 1995, Khan went onto spend three years with The Bears, before moving to Sussex for another three (1998-200). 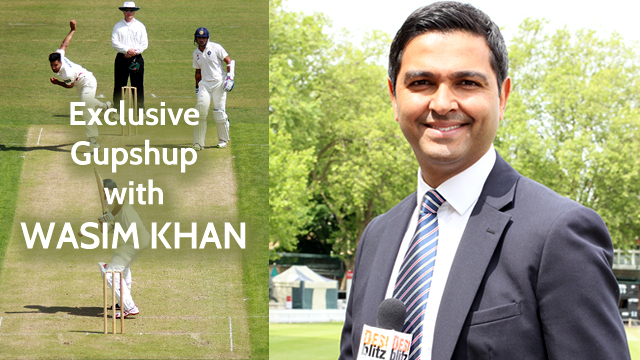 Despite his average record, Khan has had massive influence on the game after hanging up his cricket boots. After helping to promote school cricket in Birmingham until 2003, two years later Wasim had his biggest effect on the game.

In 2005 he brought his experience and expertise to the Chance to Shine Campaign, as CEO for the Cricket Foundation. The impact he made here was groundbreaking for the sport. 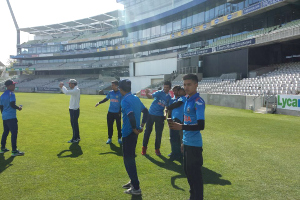 Without shying away from such a huge responsibility, Khan successfully completed the objective of organising, developing and executing this ambitious grassroots programme. Talking exclusively to DESIblitz.com about Chance To Shine, Wasim said:

“The programme is now the biggest of its kind in the world, it’s been hugely successful with everybody from all communities involved across the country.

“The programme is not about finding the next English cricketer, it’s about trying to use the power of competitive sport to develop lives, self-discipline, self-esteem and teamwork, so hopefully children grow up becoming more rounded individuals.”

This initiative peaked new heights, raising over £50 million and taking the sport to over 11,000 state schools, achieving its ten year target in eight.

In 2006, Wasim released his biography titled, Brim Full of Passion: Wasim Khan – From the ghetto to Pro Cricket and Beyond. Authored by Alan Wilkinson, the book highlights, Khan’s childhood, heritage and career. 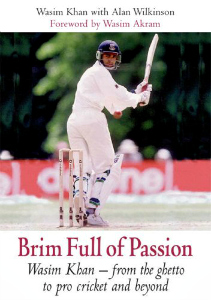 Amidst Wasim’s prospering career in the corridors of cricket; he has been recognised on numerous occasions for his services to cricket and the community.

As far back as 2008 he was named 31st out of 50 in a list of the most influential people in cricket.

Perhaps Khan’s proudest moment came when his positive impact upon society was recognised by Her Majesty the Queen. Wasim was conferred with an MBE in 2013 for his work in cricket development. Such recognition made him one of the most well respected figures, not just in cricket, but British sport as a whole.

A year later, he strengthened his position in the game, receiving the Founders Special Recognition Award at the inaugural Asian Cricket Awards 2014.

Though Khan humbly appreciates being honoured at the highest level, as a reminder he does feel that the game still has a long way to go before being accessible to all individuals.

“When you’re involved in sports development you do it for the love of what you do. These sorts of awards, as fantastic as they are, aren’t the sort of things you set out to achieve, but I feel very proud, particularly coming from the Pakistani community,” Wasim said of his achievements.

Now CEO of Leicestershire, Khan has achieved another first: becoming the first British-Asian to take such a high ranking position within cricket.

Trailblazing his way through the game has been in Wasim’s nature ever since he has been involved in the game. Having a big platform to express his voice, Khan is serious to make further inroads within the club. 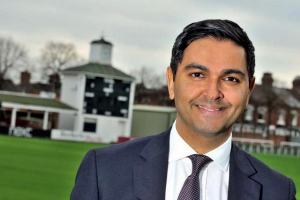 “Our vision, and it is an ambitious one, is of Leicestershire becoming the most successful non-international cricket club within the next five years,” said Khan, summing up his aspirations for the club.

One of Wasim’s main priorities has been to engage with Leicester’s large ethnic community whilst also trying to diversify the boardroom.

On changing the face of cricket at Leicestershire, Khan said: “We lack diversity in terms of women and people from other backgrounds. We acknowledge it but don’t do much about it. That’s certainly something at Leicestershire I intend to change.”

Cricket is certainly lucky to have a character as strong as Wasim ensuring a bright future for the sport. By setting records from such an early age on the cricket field, Khan continues to make a huge impact off it.

With his firm intentions, Wasim Khan is targeting future glory with Leicestershire County Cricket Club as well as promoting a level playing field. We wish Wasim and the club all the very best.