The Desi Love of Ice Hockey

Ice hockey has never been more popular amongst Canada’s 1.7 million South Asians. A Punjabi broadcast of Hockey Night in Canada was launched in 2008, attracting many new fans to the sport.

“We add bits of poetry, limericks, metaphors and we reference food since it’s a big thing in our culture.”

Ice hockey is the No. 1 sport in Canada and plays a central role in the life of most Canadians. Increasingly this includes the country’s 1.7 million South Asians.

Two of the biggest markets for ice hockey have large South Asian populations. Toronto, home to the Maple Leafs, hosts 830,000 people of South Asian origin. Vancouver, the hometown of the Canucks, is home to 250,000 desis.

Ice hockey is played on an ice rink, 61 metres long and 30 metres wide. Each team attempts to score goals by shooting the puck, a round disk made of frozen rubber, into the opposing goal. 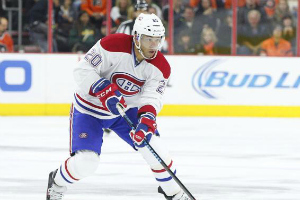 Each side has six players on the ice at any one time: one goalie, two defenders, and three attackers. Each team has 20 players, and there are an unlimited number of substitutions. Every match consists of three periods of 20 minutes.

The National Hockey League (NHL) is regarded as the best league in the world. It has 30 teams: seven in Canada, and 23 in the United States. The league is split into two conferences: Eastern and Western.

The top eight teams in each conference qualify for the end-of-season play-offs. The finalists compete for the most coveted prize in ice hockey – The Stanley Cup.

Ice hockey is central to Canada’s self-esteem, just like cricket is to India. If Team Canada wins, the nation feels happy and self-assured. Canada won Gold at the 2014 Winter Olympics held in Sochi, Russia.

The sport was codified in Canada around the mid 1800s. In the history of the NHL, the best players have been Canadian, and the Montreal Canadiens have been the most successful team. As of 2014, over half of the NHL’s players are Canadian. 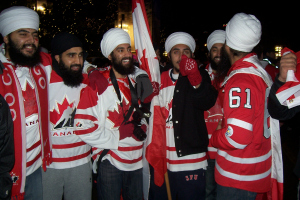 Hockey Night in Canada (HNIC) is one of the most iconic sports programme broadcast in the  country. Every Saturday, hockey fans tune in to watch the LIVE double-header.

The Canadian Broadcasting Company (CBC) launched a Punjabi-language version of HNIC in 2008 to promote ice hockey amongst South Asians.

At the start of the 2014-15 season, OMNI (part of Rodgers Media) picked up where CBC left off, as the new broadcaster of HNIC: Punjabi Edition.

Previously separated by language and cultural barriers, HNIC: Punjabi Edition has allowed three generations of South Asian households to watch together. The show has achieved cult status due to the commentators’ idiosyncratic usage of Punjabi phrases.

HNIC: Punjabi Edition presenter, Harnaryan Singh, who had an ice hockey-themed wedding, said: “We add bits of poetry, limericks, metaphors and we reference food since it’s a big thing in our culture.” 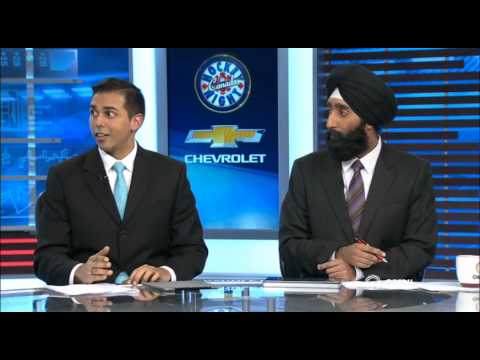 In recent years, South Asian ice hockey fans residing in Vancouver have garnered a reputation for their fervent support. They wholeheartedly participated in the street celebrations when Canada won the Gold medal at the 2010 Vancouver Winter Olympics.

The following year, when the Vancouver Canucks reached the 2011 Stanley Cup Finals, fans in Surrey, a suburb of Vancouver, were celebrating in the streets with bhangra dancing and dhol playing.

It was whilst growing up in Vancouver that avid Canucks fan and iconic Bhangra artist, Jazzy B, got his stage name from his teammates on the high school hockey team. 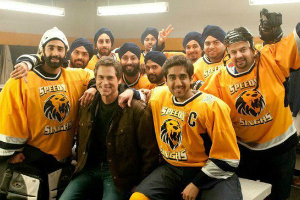 Ice hockey’s popularity has been extended to cinema as well. Co-produced by Bollywood’s Akshay Kumar, the English-language Canadian film Breakaway (2011) was a commercial success.

The story of the film is about a young lad, Rajveer Singh, played by Vinay Virmani, who against all odds, wants to follow his dream of playing ice hockey. Virmani, who co-wrote Breakaway, said:

“I have always struggled with the balance between being Canadian and being Indian so I took elements from life and wanted to create this story for all families across Canada and the world.”

Whilst participation levels amongst South Asian Canadians is increasing, the community is still lacking in high-profile NHL players. The first player of South Asian heritage was Robin Bawa, who played in the NHL between 1989 and 1994.

Manny Malhotra is currently the only player in the NHL, and the second ever, of South Asian heritage. Lately, he has become accustomed to his status as a role model for desi youth:

“When I hear Indo-Canadians come up to me and they say I’m watching hockey because you are playing, or their son is joining hockey because he’s seen me play hockey, that’s a pretty cool feeling to have,” said Malhotra. 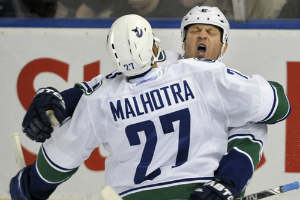 In recent times, South Asian players have made it to the cusp of the NHL, but have not quite broken through.

The closest have been two players from Surrey, British Columbia, who had been drafted by NHL teams; Prab Rai by the Vancouver Canucks in 2008, and Kevin Sundher by the Buffalo Sabres in 2010.

In the 2013-14 season, a trio of Indo-Canadians, Jujhar Khaira, Manraj Hayer, and Tyler Sandhu, who all played for the Everett Silvertips, made a big impact in junior hockey. Khaira was drafted by the the Edmonton Oilers in 2012, and is currently on the fringes of the squad.

The desi love of ice hockey and the number of youngsters taking up the sport in their droves, means we are likely to see more members from the ethnic minority participating in the NHL in the future.

Harvey is a Rock ‘N’ Roll Singh and sports geek who enjoys cooking and travelling. This crazy guy loves to do impressions of different accents. His motto is: “Life is precious, so embrace every moment!”
India clinch 2014 Kabaddi World Cup Titles
7 Homegrown Stars of 2014 Indian Super League