The Professional Kabaddi League is set to hit the grounds of India in July and August 2014. Star players from eight city based teams will be competing for the first ever Kabaddi league title. The tournament is going to be fast paced, exciting and entertaining.

"It is a matter of huge pride. It is a sport where the amount of skill required is immense."

Following on from the success of various leagues around cricket, hockey and badminton. It was only a matter of time before the sport of Kabaddi took the limelight with its very own league.

The buzz surrounding the Pro Kabaddi League, an IPL style avatar of Kabaddi has been gathering pace since the launch in March 2014 by Mashal Sports and the International Kabaddi Federation (IKF) at the National Sports Club in India (NSCI).

A ten minute exhibition match between top players in an ‘arena-within-an-arena’ at the NSCI Indoor Stadium, Mumbai spectacularly showcased the fresh, exciting and international face of Kabaddi. 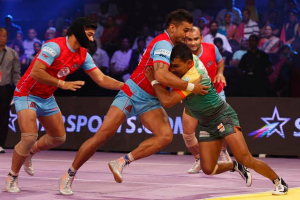 The sport has progressed from being a loved Indian game to the international platform.

The League aims to extend its reach further to the international arena by bringing Indian and international players along with acclaimed Indian personalities and sports authorities on the same platform.

Mashal Sports Managing Director and well known commentator, Charu Sharma, who is the force behind conceptualising and organising the league said:

“I just knew, instinctively then, and more surely now, that modern, international Kabaddi has all the ingredients required to make it a major, visible force in the world of sport. I am truly grateful to the many visionaries who have made Pro Kabaddi possible.”

Pro Kabaddi will consist of an eight-city league with games to be played on a home and away basis with each team playing each other twice. The games will take place between July and August 2014. Matches will be played as per the current international rules and regulations of the IKF. 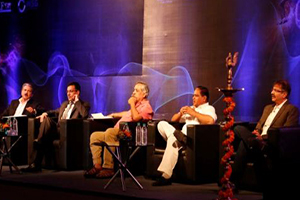 All the League matches will be played on a specially developed mat in state of the art indoor stadiums across eight cities. Top Kabaddi players from across India and the globe will participate in a show of intense competition and sporting camaraderie.

The matches will be preceded by a player auction; each team will get equal opportunity to build their squads. Almost hundred players will be auctioned, out of which seventy-two players will be Indian. The remaining will be international players from Afghanistan, Bangladesh, Canada, England, Indonesia, Islamic Republic of Iran, Italy,  Japan, Malaysia, Nepal, Pakistan, South Korea, Sri Lanka, Thailand, Turkmenistan, United States of America, Vietnam and Zimbabwe.

There are eight city based franchises up for grabs in the League. The teams are Mumbai, Bangalore, Chennai, Delhi, Kolkata, Pune and Patna and Jaipur.

The Franchise winners are:

Bollywood Superstar Abhishek Bachchan will be hoping to bring some colourful flavour into the league as he has acquired the Jaipur franchise and rumours are strife that Shahrukh Khan may be tempted into buying a franchise.

Bachchan said: “It is a matter of huge pride. It is a sport where the amount of skill required is immense. Having played sports at school level and being a sports enthusiast, it’s very exciting for me to be able to be part of this endeavour.”

Pro Kabaddi League, will have robust marketing strategies. Each franchisee will not only have their own team colours and star players but also create their own fan following with innovative media outreach strategies.

Amongst the players to be auctioned will be Navneet Gautam, 2006 Gold Medalist at the Asian Games and Rakesh Kumar, recipient of the Arjuna Award in 2011.

Jasvir Singh (Gold Medalist at fourth Asian Indoor Games), Samarjit Sihag (Gold Medalist at Asian Games 2010, Ajay Thakur and Rajaguru are also in line to be auctioned. These players, along with many international stars will hope to be the new heroes in the sport of Kabaddi. 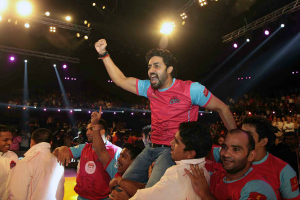 What was once considered a game of brawn is not so now. The introduction of mats, shoes, new techniques and changes in rules has made the sport infinitely more athletic and interesting. The modern, international, competitive avatar of Kabaddi has evolved into a spectacular, hugely popular sport in an ever-growing list of countries from around the globe.

The coming weeks are going to be interesting as the franchises prepare themselves for a bidding war over the purchase of the top players. Who will have the biggest purse to secure the big name signings – We shall wait and see.

The Indian Premier League (IPL) and Indian Badminton League (IBL) have been a huge success with record viewing figures. As we all know the Indian’s love their sport but will Kabaddi be given the support it thoroughly deserves?

All we can do is sit back and wait for July when the battle commences for the title of the best Indian Kabaddi team of 2014.