“It will definitely help getting more girls to play kabaddi.”

Euro 2016 may be one of the biggest international sports events. But in India, the story is a little different.

The Women’s Kabaddi Challenge (WKC) has drawn a viewership that rivals the football tournament, which features some of the highest-paid athletes in the world.

Together, they raked in as astonishing 38 million viewership. This easily beats Euro’s 23.8 million audience across its first 45 matches.

According to Broadcast Audience Research Council, each of the Kabaddi game generated 7.2 million impressions.

An impression is defined as ‘average number of viewers at any time during the match’. 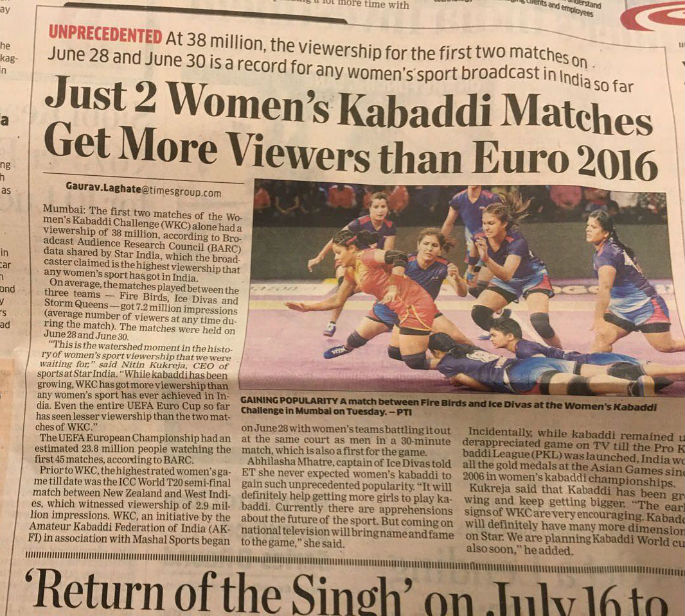 Star India, the competition’s broadcaster, confirms what the WKC ladies achieved is a record-breaking moment for women’s sports in India.

Their CEO of sports, Nitin Kukreja, says: “This is the watershed moment in the history of women’s sport viewership that we were waiting for.

“While kabaddi has been growing, WKC has got more viewership than any women’s sport has ever achieved in India.

“Even the entire UEFA Euro Cup so far has seen lesser viewership than the two matches of WKC.”

Ice Divas’ captain, Abhilasha Mhatre, is elated at the tournament’s popularity: “It will definitely help getting more girls to play kabaddi. Currently there are apprehensions about the future of the sport.”

Bollywood actor Abhishek Bachchan, who has been a strong supporter for women’s participation in Kabaddi, tweets:

“GIRL POWER!!! Said it 2 weeks ago that women’s kabaddi it gonna be huge. Here’s the proof! Well done!”

Actress Sophie Choudry and cricketer Snehal Pradhan have also been very vocal in backing the league.

After the success of men’s kabaddi, time to go 1-up! Wishing luck to the gladiator women ready to #CrossTheLine ? https://t.co/f41wwBYYDR

Here is the remaining fixture for Women’s Kabaddi Challenge 2016:

You can find out more about the tournament here.