Fans of UFC and WWE rejoice! Jinder Mahal will join Arjan Bhullar to the Octagon at UFC 215. The young UFC fighter will have his debut match at the event.

"There was no Indian in the game and UFC wants to go to India, much like [WWE]."

For those who enjoy watching both WWE and UFC, this will come as brilliant news. Wrestler and WWE Champion Jinder Mahal will join Arjan Bhullar at the upcoming event, UFC 215.

The Canadian-Indian sportsman will accompany the fighter to his debut match in the Octagon. Arjan Bhullar will face against Luis Henrique in a Heavyweight match.

UFC 215 will take place on 9th September 2017, located in the Rogers Place in Alberta, Canada.

The exciting news became announced on Arjan’s Instagram. Sharing a picture of himself and Jinder Mahal, both holding the WWE Championship belt in a gym, he revealed:

“When we as a people can genuinely support each other amazing is possible.

“I was able to watch The Maharaja do his thing in Vancouver and now I’m excited to announce [WWE] Champ [Jinder Mahal] will be taking time away from his busy schedule to accompany the Team for my debut fight in his home province of Alberta.”

The two sports figures have also spoken together on the upcoming joint appearance at UFC 215. Arjan Bhullar hailed as it a great opportunity for Indian wrestling and fighting. He said:

“There was no Indian in the game and UFC wants to go to India, much like [WWE]. So I felt: ‘You know what? I can be a great representative ambassador for my people and for the sport in that regard.'” 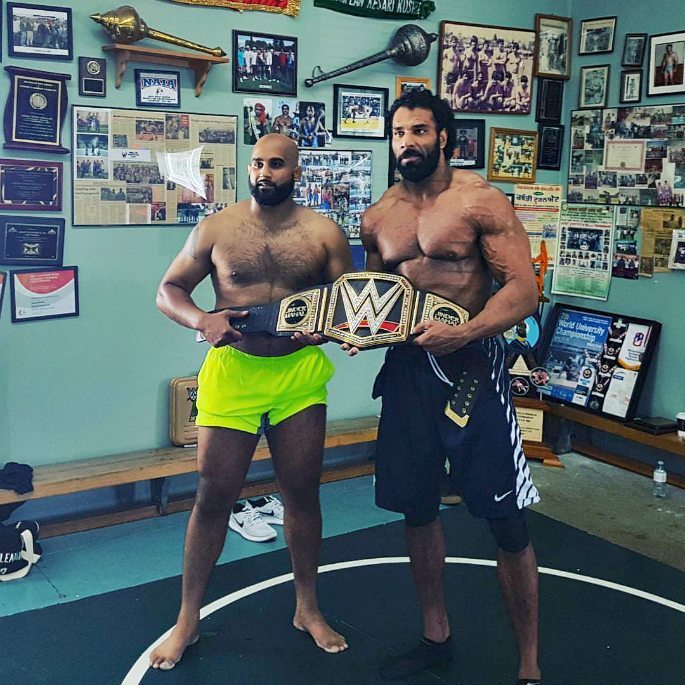 Jinder Mahal also commented on his own status as a figure of inspiration for the younger generation. He explained:

“A lot of kids tell me that they look up to me. It’s a great feeling. You know, it’s not something I hold lightly – I’m very proud.”

Many Indian fans of wrestling and fighting will surely tune in to watch the upcoming fight on 9th September 2017. Watching Arjan Bhullar walk towards the Octagon with Jinder Mahal by his side.

And as Arjan trains for his debut fight in the UFC, the WWE wrestler also has a match of his own to prepare for. WWE’s next pay-per-view, ‘SummerSlam’, will witness Jinder go against Shinsuke Nakamura on 20th August 2017.

‘Summerslam’ hails as one of the biggest events in the wrestling calendar, so this will undoubtedly serve as a thrilling match.

As both sports events approach, both Arjan and Jinder will make sure they are ready for their important fights.