Tal Singh trains in Las Vegas ahead of Professional Debut

Amir Khan’s protege Tal Singh has gone to train in Las Vegas in preparation for his professional boxing debut later in 2021.

"I already knew he had talent"

Amir Khan’s protege Tal Singh has gone to Las Vegas and has teamed up with Clarence ‘Bones’ Adams as he prepares to make his professional debut later in 2021.

Khan is managing Singh’s career, the first signing to his management team.

Adams said: “Amir text me and we talked a little bit. I said, ‘Just go ahead and bring him over.’

“He’s got power for his weight division, but it’s just getting it out of him and making sure that the speed and the power go together.

“I’m really impressed with his power.

“I threw him right in there to spar on the first day, to see what he’s got.

“I didn’t tell him it was a two-time Olympian, a silver medallist and an undefeated professional at 115lbs.

“It was quite a surprise for him, but it also let him know where he was at, where I’m at.

“I already knew he had talent, or Amir wouldn’t have been calling me. It’s just getting it out of him is the thing.”

Singh says he relished the opportunity to train with Adams, a former WBA super-bantamweight champion who has since become a respected trainer. 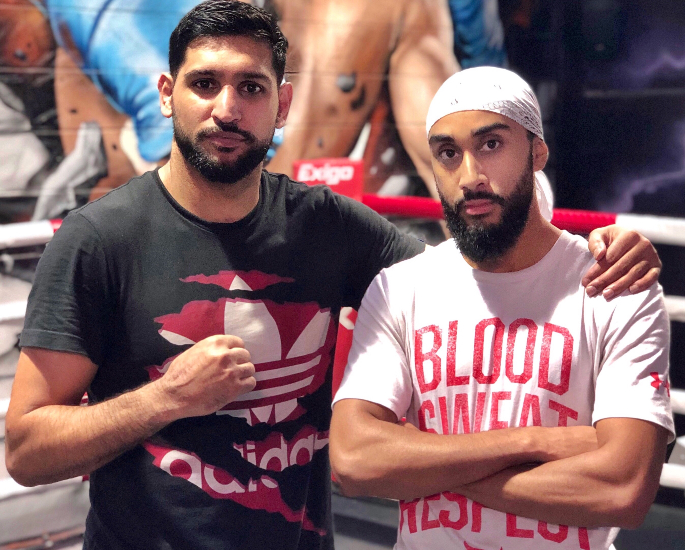 “I was open to it completely because it’s [Las Vegas] the boxing capital of the world.

“The fighters over there in the States, it’s a style that suits me perfectly.

“He [Khan] wanted to put me with one of the best trainers in the world and a future Hall-of-Famer in ‘Bones’ Adams.

“Now that we’re working together and I’ve been here, I’m learning every day and it’s a great thing.”

“I thought that he’s a tremendous coach. In my opinion, he’s a great teacher, and there’s not many teachers in boxing nowadays.”

He continued: “I can’t wait to showcase what we’ve been doing here in Las Vegas with ‘Bones’ to the fights fans in the UK.

“We’re going to be looking to make a big statement. I’ve always been told I’ve had talent, even back when I was training at the Hayemaker gym alongside David Haye.

“It’s just a matter of time that I’ll be where I want to be.”

Adams believes Singh will achieve his ambition. But he first intends to maximise his fighter’s stamina and strength before he makes his pro debut.

Adams said: “I train for knockouts. I do not train for decisions.

“When he’s confident in himself to be able to do what he’s got to do, I think he’s going to be like a ‘Mini Amir’.

“But right now he’s not really confident in what he’s doing, mainly because of the shape.

“Once he gets a little more comfortable within a couple of months, I think it’s when you’re going to be able to see a really big difference.

“He’s going to shock everybody when he fights, I can tell you that.”

Dhiren is a journalism graduate with a passion for gaming, watching films and sports. He also enjoys cooking from time to time. His motto is to “Live life one day at a time.”
Indian Paralympian Sumit Antil on Gold Medal Win
Indian Cricket Head Coach Ravi Shastri contracts Covid-19