“I really believe I've earned my shot against the best boxer in the world."

This was Khan’s most inspiring performance in the ring. His superior speed and movement saw him dominate the fight from beginning to end.

All three judges scored heavily in favour of the British boxer as he beat his American opponent by an unanimous decision – 120-8, 119-9 and 118-10.

Going into the match there was little to choose between the two fighters, with both weighing in at the 147 pounds limit.

During the pre-fight talk, both fighters exchanged some light banter: 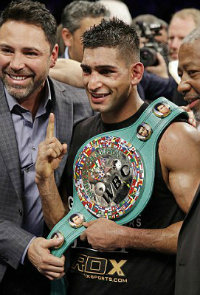 “I’m from England but I’ve got more fans than you in America. I’m going to win this in style,” King Khan told his opponent.

Replying to the Bolton Boy, Alexander replied: “You’ve got to say that, in your mind you know I’m going to beat you. You know you’re already beaten.”

On fight night, all eyes were on Amir Khan as he entered the ring wearing the most expensive ever boxing shorts. The 24 Carot Gold shorts designed by Sophie Whittam costed him $50,000 (32,000).

Alexander made his entry into the ring in sparkly red shorts. Californian based Robert Byrd was the referee for the match.

Khan started the better of the two boxers as he controlled the first few rounds. Alexander tried to get into the act in the fourth round, but he found it difficult to match the speed of Khan as he got in a straight right hand punch just before the bell.

Alexander a former two weight world champion did land a punch in the fifth, forcing trainer Virgil Hunter to say a few stern words to Khan.

Hunter’s dressing down to Khan seemed to have worked as he dominated the seventh round. Showing no signs of slowing down, Amir was now cruising towards victory. 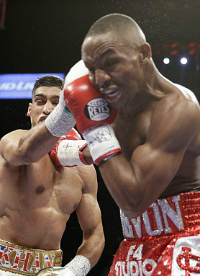 King Khan continued to dazzle Alexander in the tenth and subsequent rounds. With the match coming to an end, Khan began to celebrate as he won the fight by an unanimous decision.

On the night it was truly a boxing master class from Khan, demonstrating an exhibition of speed, skill and quality.

While Khan said he wanted to prove a point in Las Vegas, he believes he has done enough to earn a fight against Floyd Mayweather.

After the fight, speaking to the media, the man from Bolton said:

“I really believe I’ve earned my shot against the best boxer in the world and that’s Mayweather. He is the ideal fight for me. It would be a game of chess, but I would be too skilful. I have the skill and movement to beat him. He will not be able to hurt me.

“I feel better now than I did when I was 25. I’m dedicated to the sport and I know there’s a few years left in me. I’m going to try and force that fight with Mayweather.”

While Amir wants Mayweather as his next fight, his domestic rival Kell Brook believes he should be Khan’s next opponent. The IBF world welterweight champion said:

“He’s had two fights at welterweight and he’s trying to jump the queue and get the big fight. We all want the big massive fight. But the fact is I want to hurt him, hurt Khan and give the British public the fight they want to see.”

There was positive reaction of Khan’s win across social media. Impressed by his performance, British professional boxer David Haye tweeted:

“As predicted, an amazing, disciplined & punch perfect performance by @AmirKingKhan against a world class fighter.”

Alexander will be disappointed losing so convincingly. As a relatively young boxer, he will want to forget this fight and bounce back quickly.

With so much talk about Amir’s next fight, all his fans will be hoping he gets the chance for a big show down with Floyd Mayweather or Manny Pacquiao.

DESIblitz congratulates Amir Khan for his empathic performance against Devon Alexander and wishes him all the best for the future.