After releasing a series of short teasers, Ubisoft has launched Far Cry 5’s first trailer! Set in Hope County, Montana, the series takes us closer to the Western world.

With exploding trucks and the possible chance to fly planes, Far Cry 5 may adopt quirky elements too.

Since Far Cry Primal, Ubisoft has remained very quiet about their next instalment in the franchise. And after various teasers, Far Cry 5 have finally released its first full trailer.

Launched on YouTube on 26th May 2017, the trailer remains coy about the game’s story, yet reveals more on the atmosphere.

Compatible for PC, Xbox One and Playstation 4, it’s set for a release date of 28th February 2018.

As already known, the game will take place in the fictional town of Hope County, Montana.

While appearing as a quaint country town, it herein lies a sinister group overrunning the community. Forcing trapped people to their cult, players will be in for a thrilling, high-edge experience.

The trailer hasn’t directly revealed the main character players will follow, however, Ubisoft revealed in the trailer’s description: “When your arrival incites the cult to violently seize control of the region, you must rise up and spark the fires of resistance to liberate a besieged community.”

In terms of graphics, the game appears stunningly beautiful. Developers seem to have captured the environmental aspects very well.

It didn’t reveal much on actual gameplay. Yet, with exploding trucks and the possible chance to fly planes, Far Cry 5 may adopt quirky elements too.

Prior to the trailer launch, Ubisoft had only revealed small teasers to give a taste of what to expect. Already they presented gamers a different take from past instalments. Previously, the Far Cry series has explored the locations of the South Pacific and the Himalayas.

But the teasers (and a new image) depict a rural setting, deep within Hope County, Montana in the US. However, it has already sparked controversy, especially with regards to the image. Striking a close similarity to Da Vinci’s The Last Supper, it shows white, arguably “redneck” Americans.

Holding guns and knives, it seems players will have to take on a violent, religious cult. 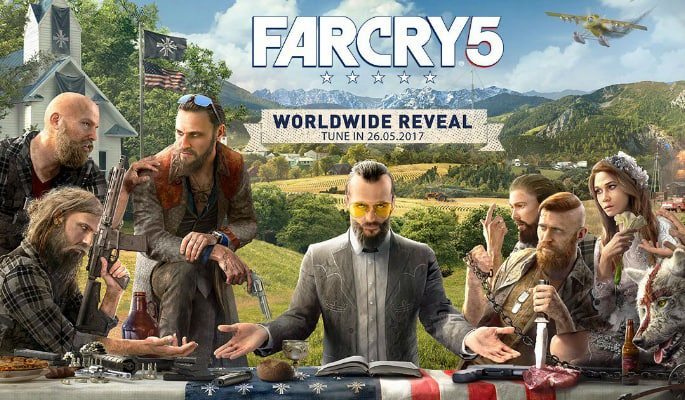 While controversy has arisen regarding the ethnicity of the enemies, it appears the “villainous cult” antagonists is becoming saturated. Players have had to fight off cults in previous games such as the Outlast series.

However, the Far Cry series has become a master at making memorable, intriguing villains. Take Vaas Montenegro from Far Cry 3 and his ‘definition of insanity’ speech for example.

As Ubisoft release the first Far Cry 5 trailer, it will act as enough to keep fans going until E3. At E3, the gaming company will release more details on the game and hopefully reveal actual gameplay.

Make sure then you don’t miss out on any of the details at their press conference, scheduled for 12th June 2017.