"I want to show the world that we can improve Pakistan.”

Boxer Amir Khan has pledged support to Pakistan on issues of peace and development.

During a visit to Pakistan, Amir promised to help rebuild an Army school in Peshawar where 132 innocent children were brutally murdered by militants.

Amir also revealed his intentions of establishing a boxing academy in the country.

The twenty-eight-year old welterweight boxing champion from Bolton arrived in the Pakistani capital Islamabad on Wednesday 24 December 2014. Amir travelled to Pakistan accompanied by his young brother Haroon Khan and other family members. 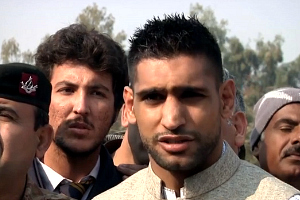 Upon landing in the country, Khan conveyed his deep grief and sorrow over the killing of innocent people in Peshawar. Khan said:

“My deepest condolences go out to all the affected families and I wish to express my full support for Pakistan and the people of Pakistan.”

Amir who has Pakistani roots said he wanted to rebuild the school, along with promoting peace in the country.

Expressing his solidarity with the people of Pakistan, Khan added: “I want to show the world that we can improve Pakistan.”

In association with Constantine PR and his AK Foundation, Amir Khan held a press conference at the Marriott Hotel in Islamabad to highlight some key development initiatives for the country. After greeting and thanking the media, Khan said:

“I have travelled to Pakistan, despite security threats to prove sports and education is the way forward. I am willing to offer the government of Pakistan my support. And if stakeholders need any help I am here for them. 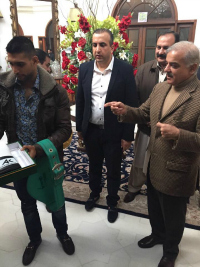 “We want to start [Boxing] academy here. The one thing I wanted to make this visit was to show the world that Pakistan is a safe place. We can improve the country, there’s a lot of talent here. We should be helping and supporting each other.”

Khan promised to auction his expensive boxing shorts to raise funds for building a security wall at the Army school in Peshawar. He had worn the 24-carat gold shorts, during his win against American Devon Alexander earlier in December 2014.

Speaking about the shorts, Amir said: “I brought with me this pair of shorts, these are made of real gold and they are worth £30,000 and I would be donating these to charity for rebuilding the destroyed APS School in Peshawar Attack.”

It has been reported that Pakistani business magnate; Malik Riaz is interested in buying the shorts. Responding to a question about the auction, Khan said the shorts would be sold to the highest bidder.

Whilst displaying his WBC belt at the news conference, Khan said he loved Pakistan and his fans who had always supported him. Amir also mentioned that it would be an honour if he could help Pakistan in anyway. 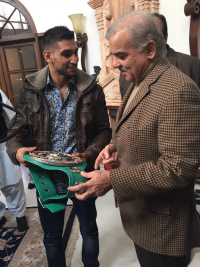 To move forward with his development plans, Amir held several meetings with stakeholders and famous personalities. He also met Punjab’s Chief minister Shahbaz Sharif to discuss ideas for promoting sports in the province.

Following the meeting with Mr. Sharif, Amir paid a visit to Data Darbar, one of the most historic Sufi shrines in the subcontinent. Khan on a peaceful mission to Pakistan prayed for the prosperity and success of all mankind.

Khan also had a special rendezvous with students of LUMS (Lahore University of Management Sciences). Engaging with the university students, Khan announced to set up an academy in Pakistan to help develop professional boxers in the country.

“There is so much boxing talent in Pakistan. I have a desire to build a boxing academy here to un-tap this talent and give them training of international standard,” he said.

Whilst having a sparring session with the students, Khan shared his knowledge of boxing, giving a few tips along the way as well. 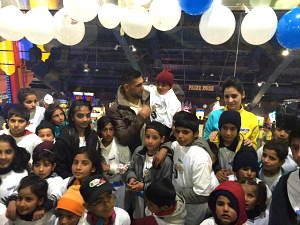 On Sunday 29 December 2014 Amir signed a Memorandum of Understanding with the Punjab Sports Board in relation to setting up the Amir Khan Boxing Academy.

Amir announced on his twitter account that the first Academy would be established in Lahore. The academy is expected to be ready for July 2015.

So while some of the youngsters could be the future of boxing, Aamir Khan’s own future is full of exciting options.

Amir’s efforts to contribute towards a peaceful Pakistan will go a long way in portraying a positive perception of the country.

Amir Khan is certainly striving to achieve the best in all his endeavours. DESIblitz wishes him all the best for the future.