The inspirational, incomparable and champion cricketer, MS Dhoni from India has retired from Test Cricket. DESIblitz evaluates Dhoni’s contribution to the longer format and the reasons that led to his retirement from Test cricket.

"Valiant while you led. Valiant in your departure. #Respect @msdhoni."

The cool, calm and collective Mahendra Singh Dhoni (MS Dhoni) announced his retirement from Test cricket after India salvaged a draw against Australia at the Melbourne Cricket Ground on 30 December 2014.

On a day when he completed 10,000 runs as captain in international cricket, the player from Ranchi decided to bring the curtains down on his nine-year Test career.

As Indian captain and player he was invincible at home, whilst quite vulnerable overseas. 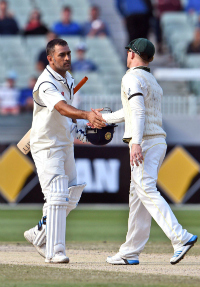 There was no doubt that Dhoni was under tremendous pressure as India lost their sixth consecutive overseas Test series. The series loss to Australia in December 2014 saw India slip sixth in the ICC Test Rankings.

Despite the strain of captaincy, making an exit in the middle of a Test series has shocked many ex cricketers and fans. Surprised by his retirement, former Indian opening batsman Sunil Gavaskar said:

“I was expecting that he would have announced that he was stepping down from the captaincy after the Sydney test. But the decision to retire altogether is a huge surprise. There is no question about it.”

The likes of Sachin Tendulkar also reacted to Dhoni’s retirement. Conveying a positive message to the media about his former captain, the master blaster said:

“After nine wonderful years he says goodbye. He has several achievements both in front and behind the stumps.”

well done on a wonderful career in test cricket @msdhoni. Always enjoyed playing together. Next target 2015 WC my friend!!

MS Dhoni, who played ninety tests for India, had seen many up and downs during his career. Let’s take a look at the highs and lows of his Test career:

Dhoni was an effective Test player, considering he had a unique technique to his batting and wicketkeeping. His overall average (38.09) was pretty decent for a wicketkeeping batsman.

Having played only four Tests, in January 2006, MS Dhoni made his presence feel when he smashed a maiden century (148) off ninety-three balls against arch-rivals Pakistan in Faisalabad.

One of Dhoni’s most memorable batting displays came in 2009. He hit a near perfect unbeaten century in Mumbai against Sri Lanka to win a test – a victory, which ensured India reached number one in the test rankings.

When playing overseas, it was his temperament over his technique, which enabled him to flourish in the international Test arena.

His disciplined approach allowed him to overcome his weaknesses, as witnessed when he scored more confidently around the offside during India’s tour of England in 2014.

Speaking about this particular trait of Dhoni’s, Gavaskar said:

“Temperament is what separates the men from the boys.”

As skipper, Dhoni was at his peak when he led India to a 4-0 win against the Australians in 2013. In the first Test of this series, Dhoni led by example and authority scoring a match winning double hundred in Chennai.

As a great leader, Dhoni has left behind a legacy for Indian cricket. As captain he made sure that the dressing room atmosphere was always relaxed and everyone enjoyed the game.

He also created a smooth transition for Indian cricket, especially when some of the experienced cricketers (VVS Laxman) retired. Young guns such as Virat Kohli, Ajinkya Rahane and Shikhar Dhawan had all blossomed under his captaincy.

MS Dhoni is the most successful Indian Test captain with twenty-seven wins in sixty tests. He scored nearly 5,000 runs (4876), which included 6 hundreds and 33 fifties.

He also contributed over 290 dismissals, making him the best ever Indian wicketkeeper. 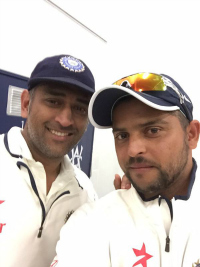 In comparison to playing at home, Dhoni’s stats as a batsman were pretty ordinary overseas, particularly when batting in bowling friendly conditions. He averaged below thirty in Australia and South Africa.

When it came to his batting, Dhoni was not firing on all cylinders especially during the final years of Test cricket. He scored his last Test century back in 2013.

As captain, Dhoni had his moments. After eight straight losses away from home, India under Dhoni saw another new low level when they lost to England 2-1 at home in 2012. This was the first time India had lost on home soil in more than eight years.

In 2014 Dhoni lost his Midas touch as New Zealand defeated India in their own back yard down under.

Under Dhoni’s Test captaincy, India lost 15 out of 30 Test matches abroad. He was just one defeat away of equaling the record of most Test losses overseas.

Dhoni’s retirement is not an overnight decision. He had been thinking of quitting for the last couple of years.

Playing all three formats with tripple (captain, batsman, wicketkeeper) responsibility seemed to have taken a toll on his body and mind.

Another reason which might have influenced his decision was India’s poor overseas record under his captaincy – it was time for a fresh new approach.

Having lost the 2014 series against Australia, Dhoni probably felt it would be difficult to hold his place just as a player.

The thirty-three-year old definitely had some good and bad memories of Test cricket. But as a complete package he was absolutely fantastic.

With MS Dhoni retiring, it’s the end of an era for Indian cricket. DESIblitz congratulates Dhoni for his enormous contribution to Test cricket.

Images courtesy of AP and AFP