An Instagram video of former Indian cricket teammates Yuvraj Singh and MS Dhoni reuniting for a shoot has gone viral.

"The reunion we have all been waiting for."

Singh posted a short snippet of the pair speaking together on his Instagram Story on December 6, 2021.

He added the time as being 3 pm over the top and also tagged the former captain in the bottom right corner.

It is possible that the two cricketers had caught up after a long time as Singh does not play IPL anymore while Dhoni still does.

The original clip was quickly picked up on and reposted by a number of people, causing it to go viral.

Social media users were sent in to a frenzy upon seeing the encounter between the two and reacted in their droves.

Someone else said: “The reunion we have all been waiting for.”

One user commented: “Probably the two most celebrated cricketers of India who gave us countless glorious moments to celebrate.”

Another added: “This is not a reel… it’s my whole childhood.”

A further image has since emerged from the two cricketer’s time together.

Singh had also posted a photo of himself getting ready in the dressing room to his story earlier that afternoon,

The cricketer wrote over it: “w/t our captain sahab.”

He then tagged Dhoni and added a ‘shoot day’ sticker. 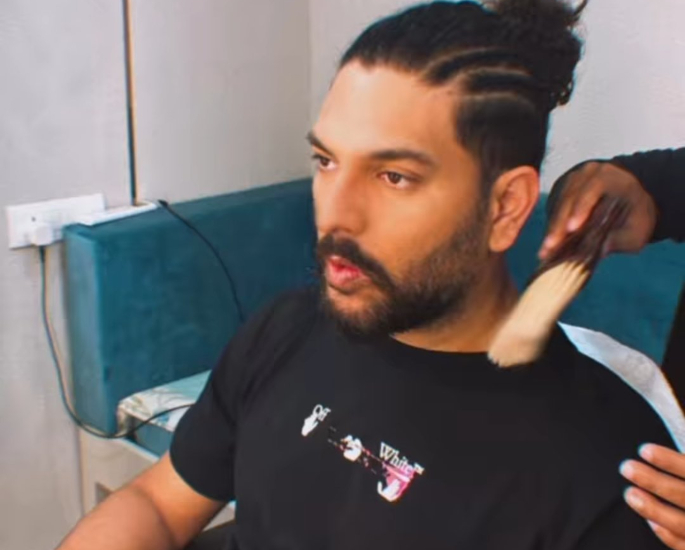 The next day, Yuvraj Singh appeared to show the results of the shoot with his 12.5 million Instagram followers.

Uploading the trailer featuring himself and Dhoni, he added the caption:

“It’s that time of the year. Are you ready? Do you have what it takes?”

“Have a big surprise for all you guys! Stay tuned!”

There is much speculation regarding what the trailer could be about with some suggesting a cricket-based reality show.

Meanwhile, others thought that Singh could be set to release his own talk show, with Dhoni the first guest set to appear on it.

He announced his retirement from all forms of cricket, including the IPL where he represented the Mumbai Indians, in 2019.

Yuvraj Singh played 40 Tests, 304 ODIs and 58 T20Is with MS Dhoni as captain for the majority of his international career.

Naina is a journalist interested in Scottish Asian news. She enjoys reading, karate and independent cinema. Her motto is "Live like others don't so you can live like others won't."
Lanka Premier League 2021: 6 Exciting Local Cricketers
Netizens ecstatic over Zidane Iqbal’s Manchester United Debut