In a heated online exchange, boxer Amir Khan splits from his wife Faryal Makhdoom after accusing her of “moving on” with British heavyweight Anthony Joshua.

"I'm not hurt but another fighter. I'm making it public. You getting the divorce #Golddigger"

British Asian boxer Amir Khan has allegedly turned to Twitter to announce that he is splitting from his wife of four years, Faryal Makhdoom.

In what has become an epic heated exchange between the estranged couple, Amir seemingly accuses Faryal of moving on to a new beau, in the form of British heavyweight, Anthony Joshua.

Amir broke the news to his followers on Twitter on Friday 4th August 2017. He announced:

So me and the wife Faryal have agreed to split. I'm currently in Dubai. Wish her all the best.

While this initial tweet, while surprising, appears to show no ill will towards his former spouse, Amir’s tweets instantly grew more bitter as he divulged the reasons behind the breakup:

“Faryal moved on quick. Always mentioned to me how much she wanted to be with another guy, from all people another boxer ? @anthonyfjoshua.”

Faryal moved on quick. Always mentioned to me how much she wanted to be with another guy, from all people another boxer ? @anthonyfjoshua pic.twitter.com/1GBAQnvzMC

Suggesting that Anthony Joshua is the cause of their split, Amir further labels Faryal as a “gold digger”:

“Lol moved up in the weight classes lol. Trust me I ain’t the jealous type. No need to send me pictures of the men your talking to #disgusted,” continued the Bolton lad.

“Left my family and friends for this Faryal. I’m not hurt but another fighter. I’m making it public. You getting the divorce #Golddigger.

“Mans like Joshua can have my left overs!” Boxer Amir Khan concludes. 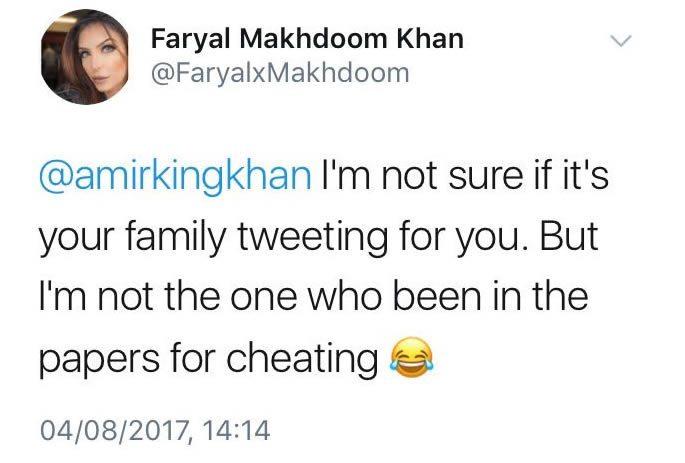 Not one to back down from a fight, even with her husband, Faryal claimed Amir’s allegations were false. In a number of tweets which she has now deleted, Faryal instead accused him of acting out because his own boxing career has taken a downturn:

“You have actually lost it. Wtf ? where do u make this stuff up from?

“Accusing other boxers just because your boxing career is finished. Man up amir. 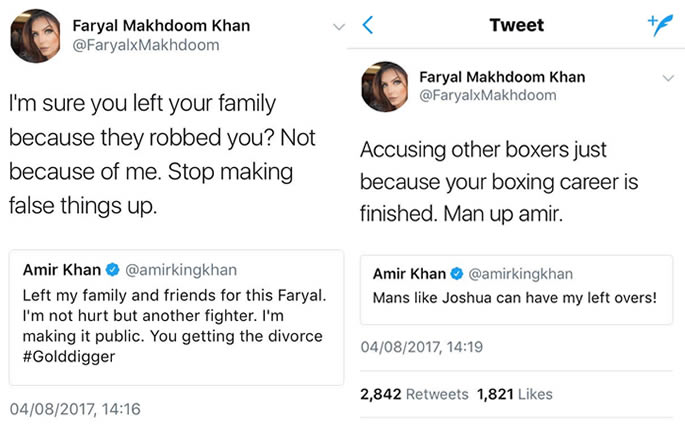 “I’m sorry to all the fans & family hurt by this. But amir did not need to do stupid tweets accusing others when he’s in the wrong. #guilty

“He’s in Dubai rightnow with a prostitude. While I’m getting accused of cheating? Treating the mother of his child like this , is sickening.”

Taking things to yet another level, Faryal later announced to her followers that Amir was currently in Dubai with a prostitute. Faryal herself was in Dubai until very recently, where she had gone to celebrate her birthday. She filled her Instagram page with a number of pictures of both her and Amir together.

Amir even posted a special message to Faryal on 27th July, wishing her happy birthday:

“Happy birthday @faryalmakhdoom Have a wonderful birthday. I wish your every day to be filled with lots of love, laughter, happiness and the warmth of sunshine.

“May your coming year surprise you with the happiness of smiles, the feeling of love and so on. Lots of love from me and Lamaisah x.”

Happy birthday @faryalmakhdoom Have a wonderful birthday. I wish your every day to be filled with lots of love, laughter, happiness and the warmth of sunshine. May your coming year surprise you with the happiness of smiles, the feeling of love and so on. Lots of love from me and Lamaisah x

While Amir has regularly made headlines over rumours of cheating and even a leaked sex video, Faryal has notably remained by his side. But now, as can be seen by her online retorts, the model and socialite has decided to offer her own take on her husband’s infidelity:

“I’m not the one who’s been in the papers every month with my pants down ? Cheater!”

“At the end of the day I can hold my head high knowing I’ve given this marriage my 100% while amir clearly hasn’t. Bad company,

“Bad role model, always around women , alcohol and then he calls himself a Muslim and runs a charity.”

Caught in the crossfire of the bitter feud, Anthony Joshua has also responded to the quarrelling pair with a few of his own tweets:

First, Joshua posted a clip of Shaggy’s ‘It Wasn’t Me’ as a tongue-in-cheek response to the ex-couples’ online argument. Later, he tweeted that he hoped the pair would be able to resolve the issue, insisting that he has never even met Faryal before:

Are Amir Khan and Faryal Makhdoom victims of Online Hack?

Shortly after the epic bust-up on Twitter, Faryal posted on her Snapchat revealing her online accounts had been hacked.

She revealed that both her and Amir’s social media had been compromised. This led to many of us wondering whether the split was completely false. 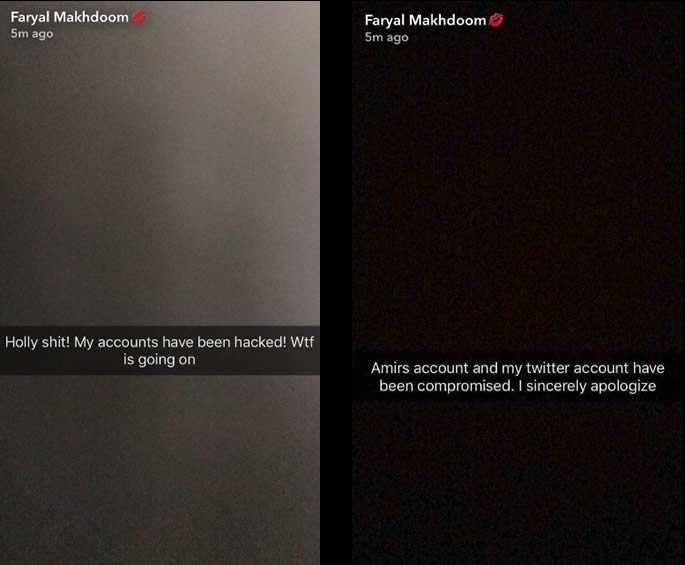 However, since Faryal’s declaration, Amir took to Snapchat himself to record a video stating that there had been no hack and that he and Faryal had indeed parted ways:

“Everything you saw on social media today is real. Me and Faryal have both decided to move on, well I’ve decided to walk away.

“I’m just not happy with the way I got treated by her and everybody else. But I wish her the very best for the future.”

“I want to say thank you for all your support, but what’s done is done. Everything on social media I posted today was true.” 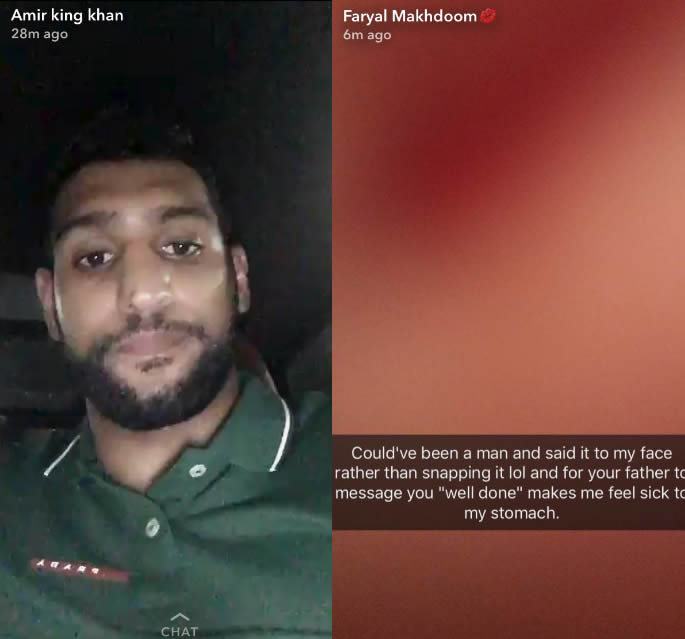 While Amir and Faryal are calling it quits now, their incredible mansion in Lostock, near Bolton, Greater Manchester has reportedly been on sale since 30th June 2017 – for £1.6 million.

Boxer Amir Khan and Faryal are rarely out of media headlines. Just a few months ago, Faryal lashed out at her in-laws accusing them of physically and mentally abusing her. Soon after, a sex video of Amir Khan and another woman also emerged.

The pair has a 2-year-old daughter Lamisah. With both Amir and Faryal frequently going public with their personal disputes, it’s perhaps not a great surprise to see both lashing out at each other on social media.

Interestingly, the pair seemed to be enjoying their time together in Dubai celebrating Faryal’s birthday. It appears that their split came just a few days after.

Evidently, this story is far from over. We shall have to wait and see what other details will emerge behind this alleged split.