Faryal Makhdoom discusses her In-laws once again, this time on ITV’s This Morning. The American Pakistani’s father-in-law responded on BBC Asian Network.

The feud between Faryal Makhdoom and her in-laws continues as Faryal makes an appearance on the ITV television show This Morning.

The 25-year-old wife of boxer Amir Khan has spoken out against her in-laws Sajjad Khan and Falak Khan. Whilst her father-in-law dismissed her claims on BBC Asian Network, shortly after her TV appearance.

Speaking on This Morning, Makhdoom acknowledged her in-laws had a problem with the way she dressed. But, the American beauty has denied that her dress code was anything hidden.

It was not a secret. She said: “I remember the first day when Amir’s mum and dad had both come with him (to her house), they knew the way I dressed.”

Makhdoom has lashed out before. She now spoke again of the matter, speaking to Holly and Phillip on the ITV show. She said:

“No-one addressed that (her dress code). Nobody said ‘sorry we can’t accept you because of the way you dress…everything was fine.”

The problems according to Makhdoom began 6 months into her and Amir’s engagement. She said: “I realised I wouldn’t be able to fit into the family.”

Watch Faryal Makhdoom’s interview on the This Morning show: 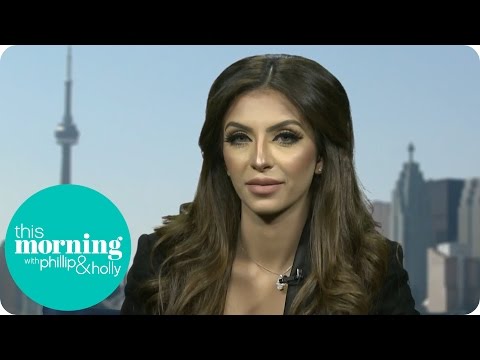 He denied that he had ever stopped Faryal from dressing her way, he said: “Wear whatever you want, fine, but please do not tweet it on social media. Because the amount of abuse you get, it hurts us.”

Khan has already stated that he has nothing against his daughter-in-law, but her appearance on This Morning made him angry. He said: “If she had any decency to patch things up, she should pick up the phone to us, and say ‘listen, guys, whatever happened, whatever I posted, it’s the end of it.’But no, she wants to go on the television.”

Boxer Amir Khan is in the middle of the ongoing battle between his wife and parents. He broke his silence and took to twitter to beg both sides to stop.

However, both parties have expressed their desire to put the feud behind them, although according to Makhdoom, this may be difficult now due to all their problems and public feuds.

Alima is a free-spirited writer, aspiring novelist and insanely weird Lewis Hamilton fan. She's a Shakespeare enthusiast, with a view: "If it were easy, everyone would do it." (Loki)
Amir Khan breaks Silence over Faryal Makhdoom Outburst
Amna Akhtar talks #GirlDreamer, mOmhead & Female Empowerment