Faryal Makhdoom lashes out at In-Laws on Snapchat?

Wife of British Asian boxer Amir Khan, Faryal Makhdoom, shocked her Snapchat followers on 6th December 2016, by allegedly lashing out at her in-laws.

In a series of ‘Stories’ Faryal opened up about the ill-treatment she has been receiving from them and in particular her sister-in-law, Mariyah Khan.

Faryal Makhdoom, an outraged daughter in law, openly spoke out against her husband’s family on the social media app.

The series of snaps recounted incidents of domestic abuse that appeared to have occurred following Faryal’s marriage to Amir Khan in 2013. 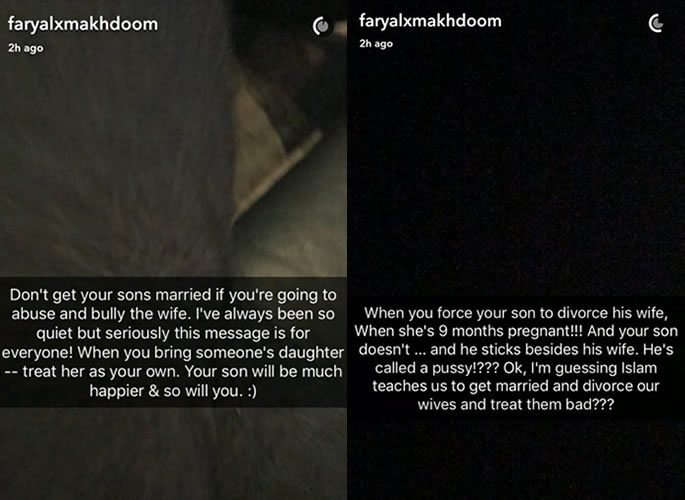 According to her Snapchat story, Faryal appears to express that her in-laws were trying to destroy her marriage.

She further focuses attention on the cruelty she faced during her pregnancy, whereby her family reportedly tried to convince her husband to divorce her. 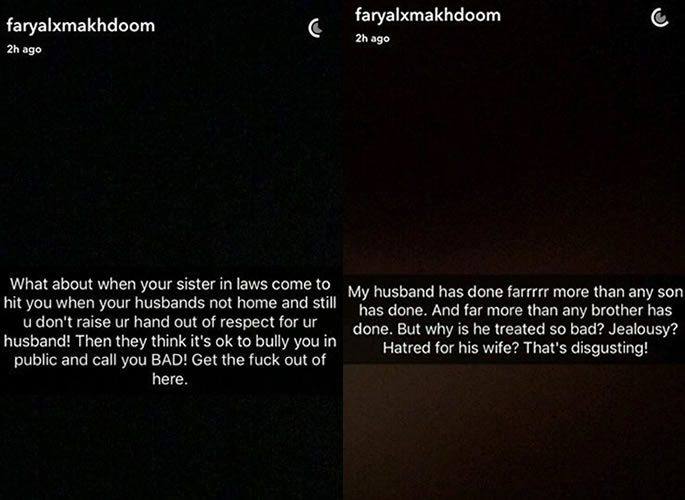 From what her Snapchat story suggests, her ‘wicked’ sister-in-law mistreated her and physically abused her out of hatred and jealousy.

Faryal continued to add that her husband, a WBC World Middleweight Champion, had been a dutiful son to his family and that he worked very hard to support them. 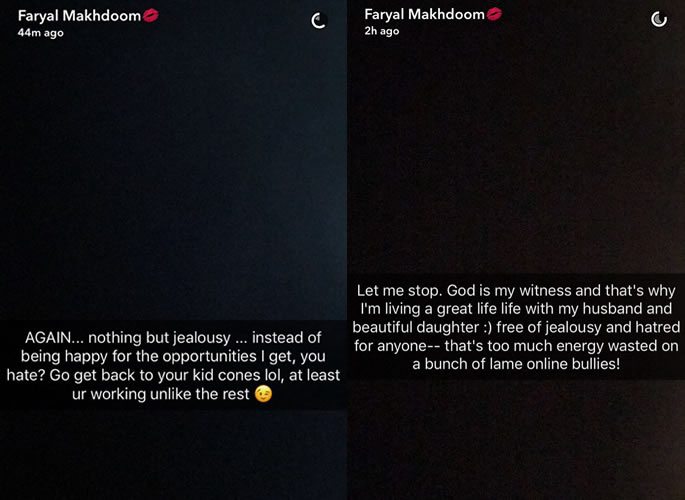 She ended her Snapchat story by insisting that the abuse she had faced as an ‘outsider’ to the Khan family was down to jealousy.

Sister-in-law Mariyah, responded to Faryal’s comments with her own series of snaps on the social media app. She appeared to openly laugh at her sister-in-law’s remarks, insisting that it was all lies. 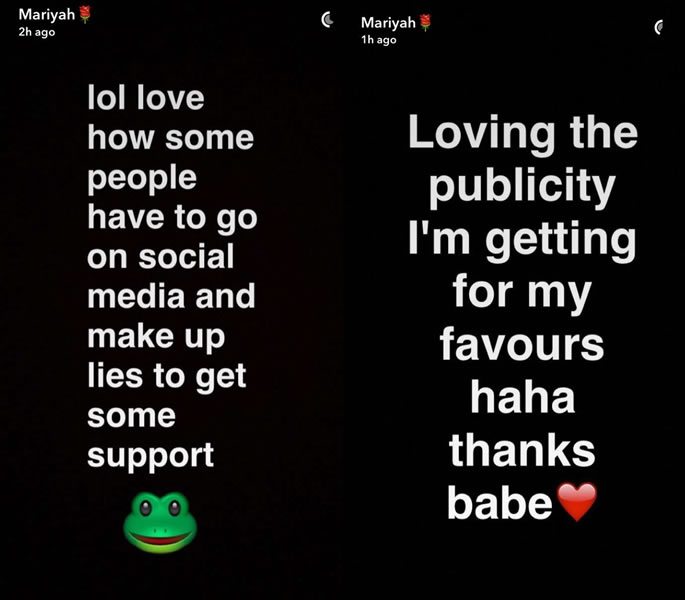 According to The Daily Star, Mariyah also posted a flower crown selfie with the caption: “Do I look like I can beat someone up?”

Faryal, a graduate in Political Science and Journalism, is a beauty with brains.

In 2013, when the renowned boxer Amir Khan, married his sweetheart, Faryal Makhdoom, through a series of luxurious ceremonies in the UK and US, she soon developed a huge international social media following.

Shortly after, she confirmed the news of giving birth to a baby girl, Lamaisah, in 2014.

As such, it was only a matter of time, when she launched her own YouTube channel. Where she illustrates makeup tutorials for her fans, taking the name of a lifestyle and beauty blogger.

Now a social media celebrity, Faryal has come under some public scrutiny and criticism about her apparent openness in the Asian community.

Could it be that this led to the disputes with Faryal’s in-laws, especially by her mother-in-law and sister-in-law?

Faryal posted her Snapchat story soon after her latest public event, where she walked the runway at the Asiana Bridal Show in Birmingham.

Her fans and followers have been largely supportive of Faryal for speaking up about the domestic abuse she has experienced in her husband’s family.

“What Faryal Makhdoom said on her snapchat about Amir Khan’s family is unfortunately a regular occurrence with many Asian families.”

Damn! The amount of love and support I get from you guys in unbelievable. Thanks a lot?? I love you guys x pic.twitter.com/TXrnUxiSoX

Some users, however, have been keen to mention how relatively ‘normal’ it is for daughter-in-laws to receive such treatment in Desi households after marriage.

They were unsurprised at the abuse she faced. But wondered why Faryal would expose her husband’s family in such a public way.

Others have also added that Faryal is using the scandal as a publicity stunt. Especially as it comes so soon after she debuts her career as a catwalk model.

However, for Faryal to come out and speak about the level of abuse she has received is brave.

Whether or not the allegations are true, Faryal exposes how prevalent issues of domestic abuse at the hands of in-laws is in some British Asian households.