Are Faryal Makhdoom and Amir Khan together for Valentine’s Day?

Speculation has grown over whether Faryal Makhdoom and Amir Khan are together for Valentine’s Day after she posted an image on Instagram suggesting she would spend the day alone. DESIblitz explores.

"Who’s going to be sitting at home? Eating chocolates they bought themselves."

Many couples usually plan a romantic, exciting time together on Valentine’s Day. But, many are speculating over whether Faryal Makhdoom and Amir Khan are even spending the day together.

Once again, their relationship has gone under the radar. After displaying a reunited front at the end of 2017, things look hopeful for them.

However, they are hit with fresh cheating allegations. With the most recent hitting headlines on 10th February 2018, thereby suggesting the couple could face new troubling times.

Now, rumours are circulating over the couple’s plan for Valentine’s Day and if they are together. This speculation has arisen over Faryal’s Instagram photo, possibly suggesting she would be alone on 14th February.

The 26-year-old posted a new selfie on 12th February looking fresh-faced. While she smiled at the camera, her caption underneath surprised many. She asked who of her fans will spend Valentine’s Day alone, suggesting she too would be on her own.

The caption read: “Btw How corny is Valentine’s Day … Who’s going to be sitting at home? Eating chocolates they bought themselves.”

Btw How corny is Valentine’s Day … Who’s going to be sitting at home? Eating chocolates they bought themselves ??

Amir and Faryal are currently in America, while the boxer is training for his return to the ring. While they initially went to different locations of the country, they did reunite along with their daughter Lamaisah.

Despite the suggestion of this post, Faryal appeared to contradict herself on Snapchat. On 13th February, she posted a series of images on her Story, some of which featured Amir. First, she promoted her new cosmetics range – but revealed Amir was behind the camera.

She teased him on his camera skills, saying: “My honeymoon highlighter (amirs can’t properly film lol but here it is) [sic].” Faryal also revealed snapshots of pink roses, seemingly from the boxer, and a video of Amir laughing. 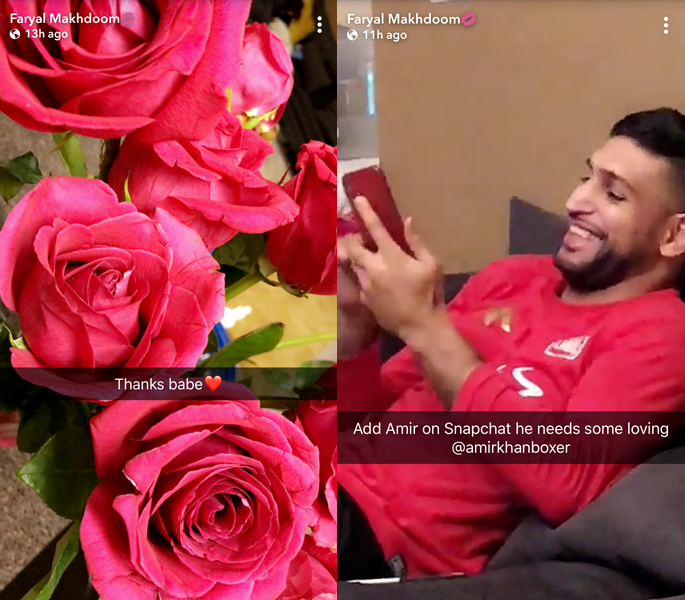 With these images, one could argue her earlier Instagram post seems confusing. What could her message mean? Is it an innocent reference to Amir’s intense workout sessions at his San Francisco camp?

Or is it alluring to the new cheating allegations? Just days prior to Faryal’s post, a model named Dasha Adbelany claimed the British Asian sportsman sent a series of flirty messages.

After exchanging numbers, she claimed Amir would shower her with compliments. He even allegedly begged her to visit him in San Francisco.

While Amir hasn’t made a comment on this set of allegations, could Faryal’s post have been influenced by them?

However, there is another potential explanation – could it actually be a case of the model looking for attention?

Faryal has shared a throwback image on Instagram of her and Amir, looking loved up. She wished her fans a happy Valentine’s Day, saying:

This public display of love seems to suggest that Faryal is unfazed by the new claims.

She and Amir witnessed an explosive year in 2017, from his leaked sex video to their marriage rift and reunion. Not to mention Amir’s funny antics in the I’m A Celebrity Jungle. Of course, this has given them a boost in publicity.

With the sportsman’s boxing return and Faryal’s new makeup range now available, one could suggest the 26-year-old is keen to keep their relationship in the limelight. Possibly with the hopes to make themselves a profitable couple.

Are Faryal and Amir spending Valentine’s Day together? Judging by her Snapchat, perhaps not necessarily on the 14th February. But it seems they did celebrate the night prior, showing they are still united.

It seems fans will have to keep a close eye on their respective social media to see if they are together on the day or not.

However, this shows tongues will likely continue to wag about the couple. Highlighting how Amir and Faryal’s marriage has become a hotly discussed and speculated topic.