Three police officers have been removed from front line duty after being filmed using a baton and “excessive force” on an Asian man in Aston, Birmingham.

West Midlands Police have taken three of their officers off front line duty after video footage emerged of them using a baton against a British Asian man in public.

The incident took place in Birmingham on Sunday 30th July 2017. Arrests were made after a vehicle carrying a group of Asian men was stopped by police and searched for drugs.

The police officers, who have been described as “local neighbourhood officers” were dressed in plain clothes. They searched the white van on Upper Sutton Street in Aston.

The video footage shows the officers detain one of the Asian men against a wall and place him in handcuffs. The man tells the officers: “They’re not my drugs though.”

One of the officers then responds: “It’s in your vehicle,” before telling one person filming: “Mate, step out of the way, move away.”

While the officer then appears to say the same to the remaining Asian men who have gathered around, heated words are soon exchanged. Almost immediately, violence erupts and one Asian man is brought to the floor and struck a number of times with a baton.

The other Asian men in the video appear to be shocked by the policemen’s actions. Even the person filming the video tells one policeman: “Oi, what are you hitting him for? … Officer, what are you doing, man?” 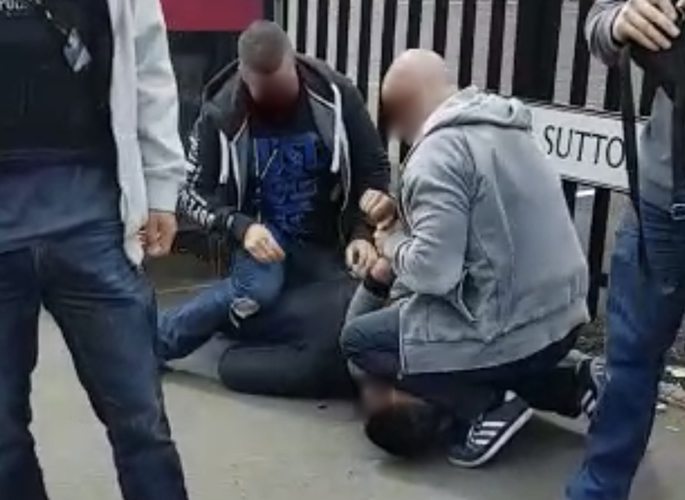 At least two videos, which were recorded during the incident taking place, have been widely shared on social media.

Netpol: The Network for Police Monitoring uploaded one video on Facebook, which has received over 140,000 views.

As a result, many have criticised the officer’s use of what appears to be “excessive force” against a British Asian man.

A spokesman for the police has since announced:

“West Midlands police has conducted an initial investigation into footage circulated on social media featuring officers carrying out an arrest. Following the investigation, a decision has been made to refer the matter to the Independent Police Complaints Commission.”

The police spokesman added that the three officers who are “all of constable rank – will be redeployed to other work but will not be engaged in duties outside a police station”.

“I am extremely concerned about what has gone on and how it was dealt with … I have already spoken to the police and they are looking into it … the police have been proactive about this.”

While tensions between police and the public have, on occasion, turned violent, Mahmood is adamant to stress that this particular incident is an “isolated case and there should not be a rise in tensions at all”.

“Stop and search is a necessary but intrusive policing power. It is very important that it is used fairly.”

The three police officers will now face a formal investigation by the Independent Police Complaints Commission. They have since been removed from their frontline duties.

Of those arrested at the scene, one 20-year old man has been released under investigation for a public offence order. Another 28-year-old man received a caution for possession of cannabis.

Aisha is an editor and a creative writer. Her passions include music, theatre, art and reading. Her motto is “Life is too short, so eat dessert first!”
Tez Ilyas talks Comedy, ‘Teztify’ and Edinburgh Festival Fringe
Boxer Amir Khan splits from wife Faryal Makhdoom