Amir Khan’s wife Faryal Makhdoom reveals she has been asked to star in UK’s Celebrity Big Brother this summer 2017. Faryal asks her fans to decide for her.

"It’s very tricky one and idk if I can do it. I want all my followers advice"

The next series of Channel 5’s Celebrity Big Brother is set to launch this summer 2017.

Producers of the Channel 5 show have apparently approached Fayal Makhdoom about starring in the upcoming summer series.

However, instead of keeping it between her and her boxer husband Amir Khan, Faryal has turned to her fans for advice on social media.

An undecided Faryal asks her fans to choose whether she should appear on the hit reality show.

Faryal Makhdoom revealed her news about being asked to appear on Celebrity Big Brother via Snapchat. She adds a twist asking her followers to decide for her.

“Hey guys, I got asked to be on Celebrity Big Brother… It’s very tricky one and idk if I can do it. I want all my followers advice. On my last Instagram post tell me whether I should or shouldn’t I? I want you guys to pick!”

Reading through the comments, fans appear to be split about her appearing on the reality show Celebrity Big Brother.

Some fans are quick to prompt her to appear on Celebrity Big Brother. One fan comments how her appearance would make her “more famous than Kim Kardashian”.

Another says: “Yes excellent opportunity to grow your brand.” 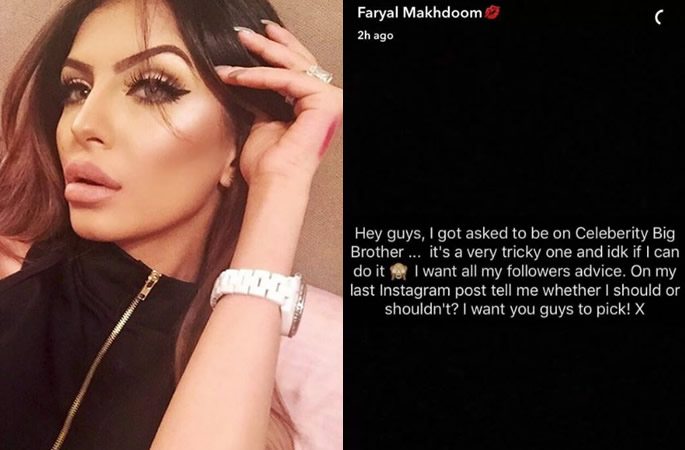 However, other fans are sceptical about this career move and being in the spotlight. One fan comments:

“There’s no way she’ll do it but if she did we could see her for herself and not brand Khan.”

Another fan says: “Just remember to say the right things and think before you say anything could backfire.”

The most obvious ‘backfire’ for appearing on Celebrity Big Brother is that her husband Amir Khan’s rumoured sex tape will be an obvious topic of discussion, as well as her on-going feud with her in-laws.

Faryal was interviewed alongside Amir Khan on This Morning where they opened up about the sex tape going public.

During the interview, the couple revealed they think the sex tape was released by someone close to them.

Faryal says: “I feel like someone’s done it out of revenge… someone close to us.”

Amidst all this Khan-family drama, could Faryal Makhdoom really appear on Celebrity Big Brother?

Will she be able to handle the spotlight? And what does Amir Khan think of his wife’s possible career move into a TV reality star?

No other celebrities have been yet confirmed to appear in the hit Channel 5 reality show which launches in summer 2017.