India beat England by five runs in the rain-affected final of the 2013 ICC Champions Trophy. Ravindra Jadeja was declared man of the match for his fine all round performance.

Dhoni is the only captain to have won the T20 World Cup, ODI World Cup and Champions Trophy

India beat hosts England in the final of the ICC Champions Trophy at Edgbaston Cricket Ground, Birmingham, in what was turned out to be a spectacular finale. On 23rd June 2013, India won the rain-curtailed game by five runs.

The Indian batsmen failed to dominate in the final, but their bowlers did exceptionally well to contain England to 124-8 in there allotted twenty overs.

Ravinchandran Ashwin, Ravindra Jadeja and Ishant Sharma changed the complexion of the match, taking two crucial wickets each. While the Indian trio bowled to plan, it has to be said that the English batsmen certainly presented the game to India.

Speaking to the media at a press chat, Dhoni revealed: “I told them not to look at the sky or the opposition. I told them that God helps those who help themselves and we had to play like the World’s No. 1 side. I am happy we did that.” 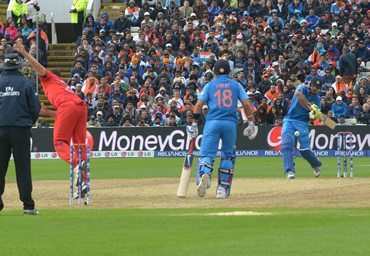 India went into the final unbeaten and were hoping to keep up the momentum. But despite having the tournaments highest run getter, Shikhar Dhawan on their side, India weren’t going to take the England bowlers, especially James Anderson lightly.

The biggest challenge for India was to beat England in their own backyard.

England came into the final with a lot of confidence, after demolishing South Africa in the semi finals. England were hoping to land their first major one-day series trophy. That was of course easier said than done. India had beaten England in eight of their last ten matches.

England won the toss and put India into bat on a damp pitch, which had some moisture to help the seam bowlers early on. However cracks in the wicket helped the Indian spinners later on and played similar to a subcontinental pitch. The pitch as predicted was a little abrasive in the second innings.

England played James Treadwell in the absence of Graeme Swann who was missing due to a calf injury. New dad Tim Bresnan returned from paternity leave to claim his spot back from Steven Finn. The Indian team as expected was unchanged for the final.

With the match scheduled to start on time, the rains came in to spoil the final. The 25,000 people inside the stadium were very patient throughout a day, which was badly affected by the weather. 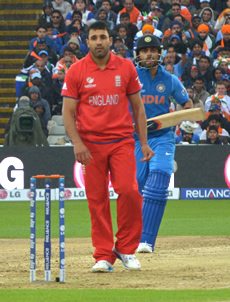 Team India had great support from the crowd, with over 60 per cent of the tickets brought by Indian fans. For India it felt like a game being played in front of a home crowd.

The game eventually began after 4pm BST, and had been reduced to a twenty over game. Dhawan and Virat Kohli built the platform for a good total, but fine bowling from England denied them the luxury.

Rohit Sharma [19] who opened the innings with Dhawan was unable to get going before becoming a victim of Stuart Broad. Dhawan and Kohli then added thirty-one runs for the second wicket as India were in sight of a healthy total.

But Bopara with his medium pace bowling accounted for the key wicket of Dhawan [31 off 24 balls], caught at cover by Treadwell. Kohli continued to dominate England before falling to Anderson for forty-three.

The Indian middle order could not tear apart the England bowling as wickets kept on tumbling. However thanks to Jadeja [33* off 25 balls] who played a cameo in the slog overs, India reached a respectable score.

England should have achieved a win quite comfortably after restricting India to 129 – 7 in twenty overs. At 110 for four, England were progressing at a nice pace. 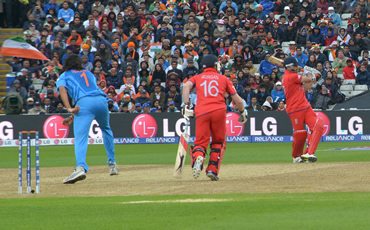 As England needed only 20 runs, with six wickets in hand, it seemed a mere formality, before Sharma struck a double blow. The dismissals of Eoin Morgan [33] and Bopara [30] proved to be the turning point in the match.

The English batsmen tried till the very end, but as so often has been the case with them in major ODI finals, they faltered at the final hurdle. Thus India won their 2nd Champions Trophy, having previously shared the trophy with Sri Lanka in 2002. Australia is the only other team to have won this trophy twice.

The true champion of this game has to be Indian captain Mahendra Singh Dhoni, as he led his team to yet another global final victory. Dhoni is the only captain to have won the T20 World Cup, ODI World Cup and Champions Trophy.

Jadeja who was named man of the match for his contribution with both bat and ball said: “I did well throughout the tournament and I was very positive.” 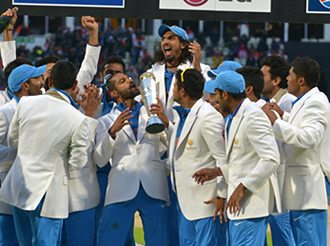 “It was quite difficult to rotate the strike, so myself and Virat just tried to build a good partnership. I was enjoying the bowling on this wicket. The skipper always backs me when I bowl,” he added.

Dhawan who also won the Golden Bat Award said: “I’d dreamt of this, I’m really happy with it. The bouncy tracks suit my game. I worked hard in practice and in the warm-up games. It makes it more special because I was out of the side for a few years.” The opening batsman dedicated his award to the Uttarakhand flood victims.

The tournament has gone really well with its short and sharp format. The powers to be are now rethinking about their decision of abolishing the Champions Trophy. The ICC has to work out a schedule which can accommodate and sustain all three formats – Test Cricket, ODI and T20 Cricket.