Sania Mirza bows out of Wimbledon 2013

Sania Mirza says goodbye to Wimbledon 2013 after losing her quarter finals Mixed Doubles match. Luck was not on India or Pakistan’s side this tournament as Sania was joined by the likes of Leander Paes and Aisam-ul-Haq Qureshi.

For the talented Indian players it was a frustrating tournament in the end.

It was yet another year of disappointment for the Asian contingent at the 2013 Wimbledon Championships, as Sania Mirza bowed out at the quarter-final stage in the Mixed Doubles. 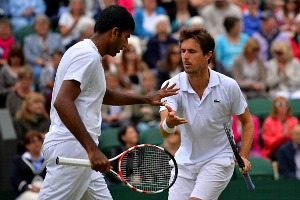 Sania Mirza holds the record for India’s highest ranked singles player for over a decade and was also awarded a Padma Shri, India’s fourth highest honour for her achievements as a tennis player. She came into the tournament on a high, having won the Women’s Doubles title at the Dubai Tennis championships in February 2013.

Born in 1986, Sania started playing at the age of six before turning professional in 2003 and winning the girls doubles tournament at Wimbledon.

It wasn’t until the 2009 Australian Open that Mirza won her first senior mixed doubles championship partnering Mahesh Bhupathi before going on to win the same championship again in 2012.

Mirza has had her fair share of controversial moments. In 2008, whilst watching compatriot Rohan Bopanna in the Hopman Cup she was pictured resting her feet and showing the soles of her bare feet with an Indian flag in front. She faced possible prosecution after a private citizen complained. Mirza protested: “I love my country, I wouldn’t be playing Hopman Cup otherwise.” 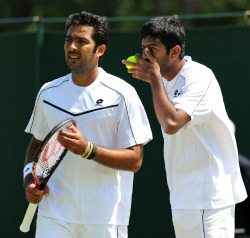 In February 2008, Mirza said that she would stop appearing in tennis tournaments held in India, starting with the 2008 Bangalore Open the following month, citing the series of controversies and upon advice by her manager. But later in 2010, she was back competing in Delhi in the Commonwealth Games without any distractions.

Sania also hit headlines again when she married Pakistani cricketer Shoaib Malik in 2010. The online attention the wedding received made Mirza the most searched woman tennis player and most searched Indian sportsperson in 2010.

The sports couple have much to share, including a competitive streak, and a desire to win. Talking about Shoaib’s recent Champions Trophy 2013, Sania said:

“It was nice to be there for my husband, watching him play and preparing for a match. You take a backseat, put things together and just be there for the other person. It helps that I’m also a competitive sportsperson, we can relate to circumstances, situations, highs and lows.”

Second seeds Mirza and her Mixed Doubles partner Horia Tec?u from Romania started their Wimbledon campaign with a bye into the second round. In the next round they defeated the non-seeded German pair of Martin Emmrich and Julia Görges by two sets to love, 6-3 6-4.

In the third round they faced non seeds Eric Butorac [USA] and Alize Cornet [FRA]. The number two seeds won the first set convincingly 6-1, followed by a closely fought second set which Mirza and Tec?u won 7-5 to seal the match.

Quarter-finals beckoned for the duo as they faced the number eight seeds Daniel Nestor [CAN] and Kristina Mladenovic [FRA]. This was the first time the Indo-European combination had come across some serious opposition and it proved tough. 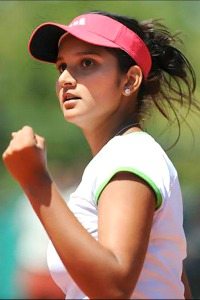 The first set was a struggle for all four players, with each player holding serve and the games nicely poised at 6-6. Nestor and Mladenovic eventually took the set on a 7-5 tie break [7-6]. This was the first set lost by Mirza and Tec?u in the tournament and now had to win two sets on the bounce to reach the semi-finals.

In the beginning of the second set Mirza broke serve but only to lose the initiative once again. There were no further break points won as the set was locked at 6-6 going into a tie break.

The pressure was being felt by Mirza, which caused her to make a number of unforced errors in the second tie breaker. This ultimately cost them the match, with Mirza/Tec?u losing the set 7-5 on a tie break [7-6]. Hence the number two seeds lost the match 7-6 7-6.

Mirza’s service let her down as Nestor repeatedly attacked her second serve while 20-year-old Mladenovic’s net play was far better than her much senior Indian opponent.

For the talented Indian players it was a frustrating tournament in the end. The phrase so near yet so far comes to mind and not to forget arrivederci for Bhupathi. A semi-final and quarter-final spot gained could have easily been a championships win!

Sid is a passionate about Sports, Music and TV. He eats, lives and breathes football. He loves spending time with his family which include 3 boys. His motto is "Follow your heart and live the dream."
India wins 2013 ICC Champions Trophy
Pakistani Fawad Ahmed to play for Australia