Sporting celebrity, Amir Khan is to become a father, five months after marrying his fiancé, Faryal Makhdoom. The couple announced the joyful news at the end of October 2013.

"Mommy in the making, thank you everyone for the well wishes."

The beautiful couple have been enjoying married bliss since their huge cross-continental Desi wedding in May 2013.

It has been five months since the wedding bells rang, and now fans of the couple can expect a baby Khan to join the ranks of British Asian royalty.

Speaking about the baby news, Khan said: “It’s still early days but we’re both very excited and can’t wait to be parents. Our families are delighted and we’re blessed to have their support and guidance.” 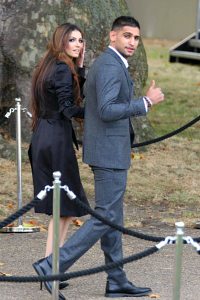 Baby Khan certainly has big shoes to fill with his father a boxing champ and his mother a budding fashionista.

The couple are largely seen as the biggest British Asian export ever seen. Regularly compared to the likes of Posh and Becks, they have become one of the most followed celebrity couples of the last year.

Although a New Yorker at heart, Faryal has quickly been adopted by British Asians who have fallen in love with her exotic beauty and impeccable fashion sense.

Sharing her precious news online, Faryal tweeted: “Mommy in the making, thank you everyone for the well wishes. All your comments/duwas have made my day.”

Without a doubt, the happy couple are overjoyed at becoming parents. Amir, 26 proposed to his American sweetheart in January 2012 with an enormous £107,000 diamond ring. The 21-year-old beauty then spent the next year or so planning the wedding of her dreams.

The cute couple finally tied the knot in May 2013, in a week-long extravagant ceremony at the Waldorf Astoria hotel in New York City. The party then moved overseas and continued in Khan’s UK hometown of Bolton and Greater Manchester in what turned out to be an even bigger celebration. 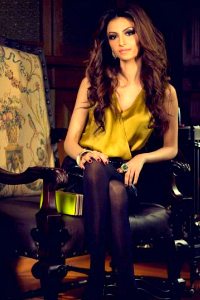 Eagerness to start a family has always been a key ambition for Amir who said before his big wedding:

“I’ve lived the young life, I’ve done everything I’ve wanted to do. Now is the right time to settle down and start my own family. I’ve got to look after Faryal, so I won’t be going out as much partying with my friends.

“I don’t want that anymore – I want to do the family thing. I think I’ll change as a person when I’m married and it’ll be a big plus for me, I’ll be able to be more focused on my job too.”

Amir revealed the exciting baby news soon after Faryal, tweeting: “Faryal & I are delighted to announce we’re having a baby – can’t wait! Thanks to our friends and family for all the support.”

For Amir, family and boxing are everything. Following a few shortfalls and defeats in the last year until his eventual win over Julio Diaz in April 2013, Amir is determined to get back on track in the boxing scene. Aiming to make boxing a priority, Amir explains what he hopes to gain:

“Maximising my income from my boxing career. That means going for the right fights, and making sure the right deals are on the table. I also work with a sponsorship team to get the right sponsors on board.”

“Starting a family is another priority. I want to make sure that my children live a normal life and won’t get spoilt, so they can be like every other kid.”

One way to get back to the top is Khan’s dream fight with Floyd Mayweather, which has been tipped off for a May 2014 showdown:

“I would love the fight. It would be an amazing fight. It’s a fight I’ve always wanted. We’re still working on a few things. We were looking at a fight against Devon Alexander. That fell through.

“There’s a lot of talk about the Mayweather fight happening, but at the moment, I’ve left it up to my team and Golden Boy,” Khan admits.

But whether such a pivotal match will go ahead or not, for the time being Amir can concentrate on building his family life instead.

With the announcement of the pregnancy, it is clear that even more celebrations are in order for Faryal and her beau as they are keenly await the arrival of Baby Khan into the world. A huge congratulations to the happy couple.

Aisha is an editor and a creative writer. Her passions include music, theatre, art and reading. Her motto is “Life is too short, so eat dessert first!”
Premier League Football 2013/2014 Week 9
India wins Thrilling ODI Series against Australia