Boxing Champion, Amir Khan has become a father for the first time. The young Bolton-born sporting hero announced the birth of his new baby girl, Lamaisah, with wife Faryal Makhdoom in the early hours of May 23rd.

Boxing hero and Bolton lad, Amir Khan has much to celebrate following his recent win over welterweight Luis Collazo earlier in May.

The athletic 27-year-old has become a father for the first time, after his wife Faryal Makhdoom gave birth to a healthy baby girl.

Khan who announced the pregnancy in October, tweeted the good news to his followers, saying: “Faryal and I are delighted to announce the birth our first child Lamaisah Khan everyone doing very well, thank you for all your wishes.” 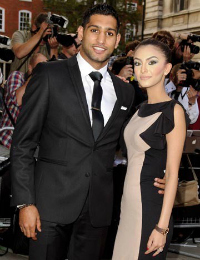 The newborn, named Lamaisah was born in the early hours of May 23. Khan proudly tweeted a picture of his daughter with the caption: “Mine and @FaryalxMakhdoom New born baby LAMYSA. Born on 23rd May 2014 at 4:05am #Blessed.”

It is thought that new mother, Faryal chose the young baby’s name. Lamaisah which is originally Arabic, means ‘soft to the touch’.

Amir and Faryal have enjoyed a whirlwind romance since they married at the stunning Waldorf Astoria hotel in New York in May 2013.

Following their year-long engagement, the couple have become Britain’s next power couple and have been regularly sighted at fashion events and celebrity bashes in and around London.

22-year-old Faryal moved from New York to stay in Amir’s hometown of Bolton, and it is clear that she has taken to family life with her in-laws very well, and has been eagerly anticipating the arrival of her daughter.

During her pregnancy, Faryal admitted that the thought of being a new mother was the ‘best feeling in the world’. 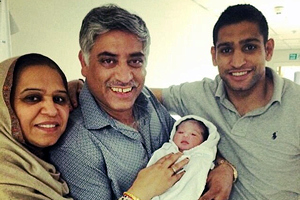 Family is very close to Amir’s heart as can be guessed by how much he mentions them in his interviews. Speaking before the welterweight fight in Las Vegas at the beginning of May, Khan reportedly said: “I have two huge events on top of each other. It feels good. I have got a great family behind me.

“It has certainly made me train even harder because I know I have got to put in a great performance for [Faryal], to stop her being scared for me. I need to put in a very good, clinical display and not get hurt so she’s not remotely stressed.”

Khan has been keen to get back into boxing action after a few slip-ups and defeats in 2013.

With a new training schedule and fitness regime, Amir has returned in better form than ever and he is definitely on the road to success. Following his defeat of Luis Collazo, Amir has been trying to set up another fight with his rival, the undefeated Floyd Mayweather Jnr, which he hopes will take place very soon.

Finding the right balance between family life and boxing life is something Amir has been very clear about from the beginning. Even before Amir and Faryal were married, the boxer mentioned how keen he was to give up the single life, settle down and start a family, especially amidst rumours about his playboy antics: 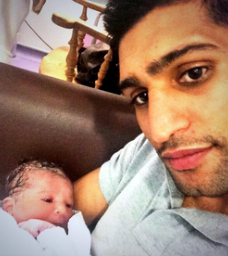 “The last few years have been crazy. My life has been fighting, training and then I have lived the single life.

“I think this is now a good time for me to settle down and spend proper time with my own little family. It will also keep me very settled which will only help my boxing,” Khan admitted.

Now with the arrival of a new born into the Khan dynasty, the young dad has something, or indeed, someone else to fight for:

“Being a dad makes it so much more important that you know when it’s the right time to go. I have a family and a little baby girl to look after now so things have changed.”

Before the arrival of little Lamysa Khan, Amir said: “I’ll be there at the birth and I’ll be fine, I think. The job I have is very tough so I think I will be alright and able to control my nerves.

“Becoming a dad is one of the biggest things in any man’s life. And it’s more nervous the first time. We’ve looked at all the scans and this a really active baby. Plenty of footwork, fast hand movement. Wonder where she gets that from!” Khan adds.

Surely, there will be a lot of high sporting hopes for young Lamysa who clearly takes after her dad. Congratulations to the happy couple on their fantastic news.

Aisha is an editor and a creative writer. Her passions include music, theatre, art and reading. Her motto is “Life is too short, so eat dessert first!”
Manisha Tailor ~ Football and Mental Illness
Kolkata Knight Riders reach 2014 IPL final