Kolkata Knight Riders beat Kings XI Punjab by twenty-eight runs in Qualifier 1 to enter the 2014 Indian Premier League final. Umesh Yadav was awarded the Man of the Match for his outstanding bowling performance, picking up three wickets for thirteen runs.

“You never know in Kolkata how it’s going to play with the weather, so I had to be careful when choosing my bowlers.”

It was a sweet triumph for KKR, as they defeated the table-toppers Kings XI despite the less than perfect weather conditions. Even the strongest partnership of the season – Glenn Maxwell and David Miller could not overcome Kolkata’s strong bowling unit.

The atmosphere inside the Eden Gardens stadium was simply electrifying, with the crowd glued to every ball in a match between two formidable teams. 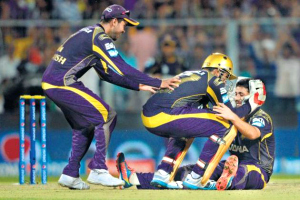 KKR won the toss and captain George Bailey decided to field first, a decision that proved fruitful overall. Mitchell Johnson managed to strike early with skipper Gautam Gambhir (1) gone in the second over.

However Robin Uthappa and Manish Pandey quickly formed a partnership to set the pace for KKR, with Uthappa racing his way to 37 off 21 balls during the power-play overs.

Uthappa also managed to break Virat Kohli’s IPL record for most runs by an Indian in a single edition of the tournament. The Karnataka batsman, who scored forty-two, now has 655 runs this season.

In the first six overs, KKR achieved a steady 55-1. Uthappa was eventually caught by Miller off Akshar Patel’s bowling. Off the very next ball, the Punjab spinner bowled Pandey (21) out, leaving KKR on 67-3 after 9 overs.

By the halfway stage, KKR’s scoreboard read 73-3, with Yusuf Pathan and Shakib Al Hasan at the crease. Pathan survived a close LBW appeal in the 11th over, but found his feet to strike a big six in the 14th over. 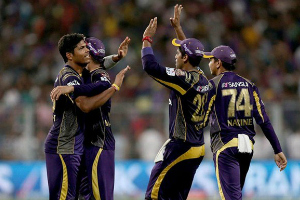 The Knight Riders, however, then suffered a double blow when they lost two wickets in two balls, losing Shakib (18) and Yusuf (20).

The arrival of two new batsmen, Ryan ten Doeschate and Suryakumar Yadav was interrupted by rain, slowing down KKR’s momentum. However, Yadav accelerated in the 17th over, allowing KKR to score 14 runs with a six and a four.

Ryan ten Doeschate was dismissed by Johnson for seventeen, as the Australian bowler conceded only three runs off the 19th over. Sunil Narine was run out for a golden duck, however Piyush Chawla went on to make fifteen runs off the final over. This shifted the momentum back into KKR’s favour, as they posted a good total of 163-8.

Speaking to the media, a relatively confident David Miller of Kings XI said:

“There’s a lot at stake here, we are privileged to be in this position. A couple of our guys have performed well throughout the campaign which makes it easy for others to perform. The balance has been good.”

Kings XI started their innings with an early loss, as Umesh Yadav dismissed Virender Sehwag (2) in the second over.

However young opener Manan Vohra (26) attacked the KKR bowlers, scoring three maximums until he was finally dismissed  by Morne Morkel. During his brief innings he was well supported by Wriddhiman Saha as their partnership accumulated forty-six runs after first six overs.

It was during the middle stretch that KKR had the upper hand. Umesh Yadav managed to take the key wicket of Glenn Maxwell who was out leg-before in the 8th over. 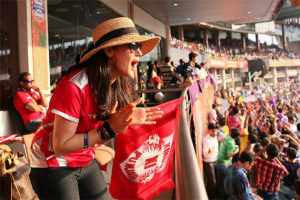 Morkel then got rid off Saha (35) in the 11th over after attempting at a big hit. This left Kings XI in a sticky position at 80-4.

In a surprising move, Bailey promoted Akshar ahead of him, but this did not work on this occasion. Chawla dismissed Miller (8) a few deliveries later, whilst a run-out caused Akshar’s departure (2).

At this point, Kings XI required a mammoth  72 runs off the last 30 balls. Rishi Dhawan came to the crease with Bailey, but the 16th over saw the pair only managing to take five singles. Dhawan (14) was out stumped by Uthappa off Shakib’s bowling, leaving KXIP on 117-7 midway through the 17th over.

Bailey and Johnson however hit a massive twenty-one runs to give their side a glimmer of hope.

But Narine’s arrival once again slowed the scoring rate as he only gave away four runs in his over. With the pressure now mounting up, Yadav sent Bailey packing for twenty-six. This was the final nail in the coffin as Kings XI Punjab finished on 135-8 in twenty overs. 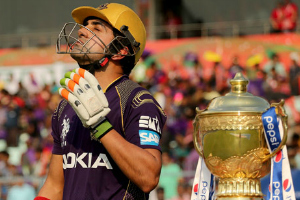 After the match, talking to the media, KKR captain Gautam Gambhir said: “You never know in Kolkata how it’s going to play with the weather, so I had to be careful when choosing my bowlers.”

He added: “The main thing was to play well throughout – the owner should be happy with the run we’ve been on, and he deserves it.”

Appreciating KKR’s performance, Kings XI skipper, George Bailey said. “I think they played beautifully. I think they have the best bowling attack in the competition. We’ve bounced back after every defeat in this comp so hopefully we’ll do the same again on Friday.”

Umesh Yadav was the pick of the bowlers taking 3-13 in his four overs. He was adjudged Man of the Match for this game.

Therefore, the Kolkata Knight Riders are the first team to secure their place in the final, which takes place on 01 June, 2014. Their opposition is yet to be confirmed – KXIP have another chance to qualify when they battle against the Chennai Super Kings in Qualifier 2 on 30 May, 2014.

Chennai beat Mumbai Indians by seven wickets in the Eliminator match played at the Bradbourne Stadium in Mumbai.

Nazhat is an ambitious 'Desi' woman with interests in news and lifestyle. As a writer with a determined journalistic flair, she firmly believes in the motto "an investment in knowledge pays the best interest," by Benjamin Franklin.
Faryal and Amir Khan welcome baby Lamaisah
Kings XI Punjab enter IPL final 2014