KKR captain, Gautam Gambhir won the toss and opted to bowl first on a beautiful track, which was ideal for batting second. Kings XI made one change with Lakshmipathy Balaji replacing Sandeep Sharma.

Following the customary countdown, the final chapter of the IPL began. After hitting one four, Punjab’s danger man Virender Sehwag was dismissed by Umesh Yadav on seven.

Skipper, George Bailey, who promoted himself to number three was cleaned up around his legs by Sunil Narine to leave Punjab on 30-2. 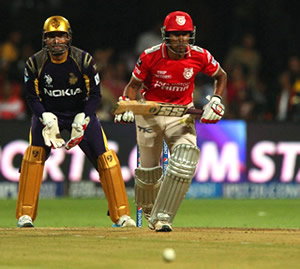 Punjab started cautiously and were going under six runs per over, before opener Manan Vohra hit the fix six of the game in the 8th over. The first ten overs in fact produced only fifty-eight runs, but Punjab shifted another gear from the 14th over.

Wicketkeeper batsman, Wriddhiman Saha reached his fifty in the 14th over after hitting Narine for two consecutive fours. Vohra also brought up his half-century as the rate now went up to almost nine runs per over.

In the 18th over, Vohra departed for sixty-seven as he was caught and bowled by Piyush Chawla. In the same over, Glenn Maxwell was out first ball when his reverse sweep went straight to Morne Morkel.

But Saha kept going, bringing up his 100 off 49 balls – This being the first hundred in an IPL final. Saha remained unbeaten on 115 off 55 balls at a strike rate of 209.09. During the last ten overs Kings XI Punjab scored 141 runs as they finished on 199-4 in their twenty overs.

“We just decided to take some time because the ball was gripping. We were going to go for after anyone who would have bowled the 14th – it was Narine – but we carried on with the plans.”

Kolkata’s run chase did not start well, handing an early advantage to Punjab. Their most consistent player this season, Robin Uthappa was picked up at point by Akshar Patel off Mitchell Johnson for five. 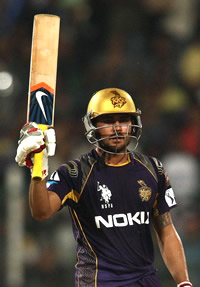 At 6-1, Gambhir and Manish Pandey had tremendous responsibility on their shoulders. The second wicket partnership was worth fifty-three, before leg-spinner Karanveer Singh sent Gambhir back for twenty-three.

Not getting to the pitch of the ball, he was deceived in the air as David Miller took a good high catch at long on to leave KKR on 59-2.

Yusuf Pathan came in and punished the bowlers, particularly Balaji. Pandey meanwhile kept going, bringing up his fifty as Kolkata reached 107-2 after eleven overs. Karanveer then took the key wicket of Pathan (36), caught inches from the boundary by Maxwell.

Shakib Al Hasan was run out for twelve, following some brilliant fielding by Bailey. Ryan ten Doeschate (4) became Karanveer’s third victim as he was caught at long on by Milller.

Pandey who was batting beautifully on 94 off 50 balls, fell six runs short of his second IPL century. During his innings, he smashed seven 4s and six 6s. With Kolkata needing fifteen of the last 12 balls, Suryakumar Yadav (5) was caught by Vohra at deep mid wicket off Johnson.

But thankfully Piyush Chawla did not panic as he hit a massive six in the 19th over to bring the equation down to five needed of six.

In the final over, it was Chawla who hit a boundary as Kolkata pulled off a thrilling three wicket win with three balls to spare. Hence Kolkata Knight Riders won their second IPL cricket title in three years.

Relishing the challenge, Man of the Match, Manish Pandey said: “I’m very optimistic, and I love to play the crunch game. We got ten in the first over, and that was the time I thought, if we kept doing that, we’ll get 200.”

Other awards given during the presentation ceremony included: Kieron Pollard (Catch of the Season), Glenn Maxwell (Most Sixes for the Season, Player of the Series), Akshar Patel (Emerging Player) and Chennai Super Kings (Fair Play).

Robin Uthappa who scored 660 runs in the IPL, received the Orange Cap. Mohit Sharma was handed the Purple Cap after taking twenty-three wickets in the tournament. 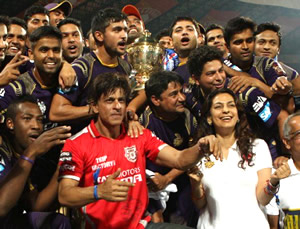 After collecting a winners cheque of Rs. 15 crore, a jubilant Gautam Gambhir said:

“This is a ground where it is very difficult to defend. We wanted to get it down to 5 overs, 50 or 60 to get. Manish played a fantastic innings, Yusuf chipped in, and Chawla hit that important six.”

On the whole, the 2014 Indian Premier League season has been  fantastic, with some great all round display of cricket.

With this triumph, Yusuf Pathan became the first player to win three IPL titles, two with Kolkata Knight Riders and one with Rajasthan Royals. Once again Shahrukh Khan tasted sweet success, but for Preity Zinta it was not a fairy tale ending she was hoping for.

Faisal has creative experience in the fusion of media and communication and research which increase awareness of global issues in post-conflict, emerging and democratic societies. His life motto is: "persevere, for success is near..."
Hockey World Cup 2014 ~ The Hague
ECB’s plans for South Asian Cricket Communities