Kings XI Punjab are through to the Indian Premier League cricket final after beating Chennai Super Kings by twenty-four runs in the second qualifier. Punjab will play the final against Kolkata Knight Riders in Bangalore on Sunday 01 June, 2014.

"What an innings from Viru, set the platform, backed up by Miller at the end"

Kings XI Punjab (KXIP) defeated Chennai Super Kings (CSK) by twenty-four runs in Qualifier 2 on 30 May, 2014 at the Wankhede Stadium in Mumbai.

With this win, Kings XI have progressed to their first Indian Premier League (IPL) final where they will take on Kolkata Knight Riders.

In this do or die cricket match, CSK captain, Mahendra Singh Dhoni won the toss and elected to field first. On a flat wicket, the decision to bowl first was probably the right choice at the time. But even Dhoni did not know what was to come.

Kings XI started at a rate of knots. Dashing opening batsman Virender Sehwag hit three consecutive fours to bring Punjab’s fifty in the fifth over. KXIP consolidated further as they reached 70-0 after the power-play overs. 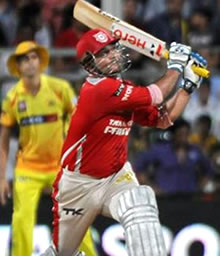 The first wicket to fall was of Manan Vohra who was caught superbly by Suresh Raina off Ishwar Pandey after making a steady thirty-four.

Glenn Maxwell had a brief innings at the crease as he was caught at cow corner by Raina from a top spinner, which Ravichandran Ashwin pitched outside off stump.

R.Ashwin celebrated the wicket with a flying kiss to Maxwell, which the Australian did not find very amusing.

Sehwag and David Miller then capitalised on some big overs, hitting sixes and fours at ease. Much to the relief of Bollywood actress, Preity Zinta, Sehwag deservedly reached his hundred off just fifty balls at a phenomenal strike rate of 200.00.

Following Lendl Simmons century against KXIP, this was the second and fastest hundred in this years IPL. 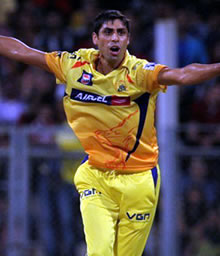 In the 19th over, an expensive Ashish Nehra came back strongly taking two wickets and conceding only seven runs. Sehwag was eventually caught brilliantly by Faf du Plessis at extra cover for 122 off 58 balls.

His dominating innings included eight 6s and twelve 4s – It was like the old Sehwag who smashed bowlers left, right and centre.

Nehra’s next victim was skipper George Bailey (1) who was clean bowled with a beautiful yorker. Miller was run out in the final over for a valuable 38 off 19 balls. In the last ball of Punjab’s innings, wicketkeeper Wriddhiman Saha (6) was caught at deep square leg by Dwayne Smith off Mohit Sharma.

Kings XI Punjab finished with a healthy total of 226-6 in their twenty overs.

At the half way mark, a happy Sehwag said:

“Whenever I went there to bat, and got out early, I got a call from my wife. My son’s friends were also teasing him about his father not scoring runs, ‘I told him, hold on beta, there is still time’.”

Set a target of 227, Super Kings got off to the worst possible start when they lost Faf du Plessis in the first ball he faced from Mitchell Johnson. Johnson banged it in short, which du Plessis could not resist as he was caught by bailey at mid off for a golden duck. 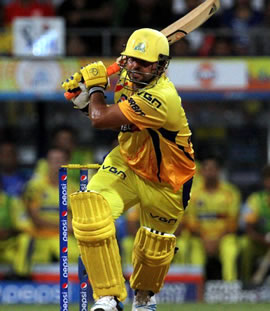 But the early set back did not affect Suresh Raina as he smashed some glorious shots all over the ground. CSK reached their fifty in the fourth over. Raina bought up his fifty in sixteen balls, the second fastest half century in the history of the IPL.

Young pacer, Sandeep Sharma then clean bowled opener Dwayne Smith who could only manage seven runs. Raina continued to control the game as he hit thirty-three runs in Parvinder Awana’s second over. With Super Kings hundred coming in the sixth over, the Chennai outfit were on course to complete a record chase.

But the decision to send Brendon McCullum in the middle order as opposed to opening went all pair shaped for CSK.

Hesitation from McCullum caused the critical run out of Raina when Bailey quickly turned and directly hit the stumps. Raina well short of the crease was out for a wonderful 87 off 25 balls. This was to be a big turning point in the match.

Shortly afterwards, McCullum’s clumsy running between the wickets got the better of him as he was run out for eleven to leave Super Kings on 140-4.

Ravindra Jadeda (27) tried to take on the bowlers but he sliced to third man where Johnson took a fantastic catch off Awana’s bowling. 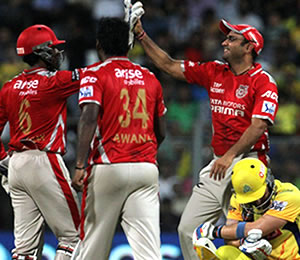 It was now left to David Hussey and MS Dhoni to reach the target. But Hussey was out to a soft dismissal, caught at mid wicket for one. Awana claimed his second wicket in the 12th over with CSK now toiling away at 142-6.

R. Ashwin (10) was stumped by Saha with some great flat bowling from Akshar Patel. Even though MS Dhoni (42*) hit a few shots at the end, it was too little too late. Kings XI Punjab won comfortably by twenty-four runs. Patel was the most economical bowler of the game with figures of 1-23 in his four overs.

Criticising some of his players, a disappointed MS Dhoni said:

“I think in the middle overs there was some very irresponsible cricket by some of the most experienced international cricketers, so I think definitely we need to have a look.”

At the presentation ceremony, a delighted, George Bailey said:

“What an innings from Viru, set the platform, backed up by Miller at the end, almost overshadowed by Suresh’s innings. We have seen two extraordinary innings tonight. I thought Awana came back very well, our spinners have done the job again.”

Preity Zinta’s Punjab will face Sharukh Khan’s Kolkata in a Cricket-Bollywood final, which takes place in the garden city of Bangalore on 01 June, 2014.

Faisal has creative experience in the fusion of media and communication and research which increase awareness of global issues in post-conflict, emerging and democratic societies. His life motto is: "persevere, for success is near..."
Kolkata Knight Riders reach 2014 IPL final
Hockey World Cup 2014 ~ The Hague