The 3rd IPL season came to a close with a terrific final crowning the Chennai Super Kings as the champions. The batting by Raina and superb fielding by the men in yellow excelled against the batting of Tendulkar and Pollard of the Mumbai Indians, giving CSK the title of the IPL 2010.

"It's about cricket and the IPL raises the bar every-time."

The atmosphere of the crowd electric. Yellow and blue flags donned around the ground showing massive support for the two teams. Lots of Mumbai Indians tops dominating the stands versus the yellow kit of the Chennai Super Kings, all supporting in a very tense and thrilling final and end to the third season of the IPL.

Chennai Super Kings showed that they had the class to clinch the 2010 IPL final from the impressively performing Mumbai Indians.

Both teams worked tremendously hard to make their way through the tournament to reach the final. Mumbai Indians played the following games to achieve their place in the final:

The Chennai Super Kings played the following matches in the IPL 2010 to reach the final:

The final between MS Dhoni’s Chennai Super Kings (CSK) and Sachin Tendulkar’s Mumbai Indians started with Dhoni winning the toss and Chennai choosing to bat first. The stadium hummed with fans in blue and yellow all around with excitement for a much-awaited final.

After the toss, Dhoni said, “Its not only about winning or losing. It’s about cricket and the IPL raises the bar every-time.” Sachin said, “It doesnt matter is we bat or bowl first.” When asked about his hand injury from the semi-final between the Bangalore Royal Challengers, he said, “Hand is fine. Had some stitches in my hand. It’s manageable. I will do my best. This is what you work hard for and I will do my best.” 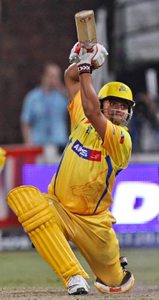 CSK started well and batted to reach 168 for 5. Chennai Super Kings score with some excellent batting by firstly MS Dhoni and then followed up by Suresh Raina who scored 57 runs. Despite the bowling efforts of Malinga and Harbhajan Singh.

Subsequently, the bowling and fielding of the Chennai Super Kings began to sparkle in the rest of the game.

Mumbai Indians found themselves chasing the score that Sachin Tendulkar had to fend mostly by himself by getting some sweet boundaries. However, around him he saw his players leave the pitch; Harbhajan left with no runs appealed by Suresh Raina, this time in a bowling position, and at 67-2 Abhishek Nayar was run-out and the bails smashed by MS Dhoni as wicket keeper. A dismissal Sachin was not pleased about at all.

Tendulkar was caught out by Murali Vijay after scoring 48 runs, a major wicket for the Chennai Super Kings. Then, an amazing catch by Suresh Raina caught out Tiwary who had just replaced Tendulkar.

At 114-6, Kieoran Pollard came onto bat for Mumbai Indians after some exquisite fielding by CSK, differentiating the sides. Pollard hit possibly the biggest 6 of the IPL, reaching the third tier of the ground from the ball of Bollinger. Then, smashing huge hits giving the game thrilling momentum.

Pollard was then caught out taking the game into the direction of a CSK win. Another wicket fell at 142-9 with Dhoni’s wicket keeping crumbling the Mumbai Indians. Subsequently, producing the final win for CSK at the final score of 146 for 9 for Mumbai Indians.

Baldev enjoys sports, reading and meeting people of interest. In between his social life he loves to write. He quotes Groucho Marx - "The two most engaging powers of an author are to make new things familiar, and familiar things new."
Lalit Modi and the IPL Finances Saga
Amir Khan ready to rock USA