The 2011 IPL final was coloured with yellow at the Chidambaram Stadium in Chennai, as the home crowd saw the home team win. MS Dhoni’s side beat Royal Challengers Bangalore with a record making score of 205-5.

The 2011 DLF Indian Premier League came to a fantastic close with an incredible batting filled match between Chennai Super Kings and Royal Challengers Bangalore. Chennai Super Kings came to the game ready to make sure their runs were as high as possible knowing that Chris Gayle is a player to watch out for from the Challengers side.

Chennai scored an incredible 169-1 making it the highest opening match in the IPL to date with the batting partnership of M Vijay and Michael Hussey. The bright yellow shirts of Chennai welcomed the cheers from the crowds in a jam packed Chidambaram Stadium. The 50,000 seats literately filled to the brim with fans from the home side were entertained to the max by their CSK team

After the ball change at 169-1, CSK did not hold back on the bombastic hits. Captain MS Dhoni came in smashing sixes from Gayle’s bowling complemented by the scoreboard saying ‘M.S.TERCLASS’ after one of his hits. The highest individual score of 95 in an IPL final was scored by M Vijay. Dhoni was out after 22 runs, leaving the rest of the work to the remaining players of CSK.

Suresh Raina and Morkel then continued in the same style smashing the ball over the boundaries reaching 199-3, when Morkel was caught near the boundary and Raina bowled out from the bowling of Chris Gayle of RCB. The CSK innings ended on huge history making score of 205-5 with a smash of six into the crowd from Bravo. Making them the team with the highest score in an IPL final at that point.

Royal Challngers Bangalore came on to bat with vigour to try and beat the massive score by CSK. Needing 206 to win RCB required the efforts of Chris Gayle to deliver his high scoring hits. Chris Gayle and Mayank Agarwal started the batting for RCB with Ravichandran Ashwin bowling from CSK. Then the unexpected happened.

Everyone from RCB was stunned when Gayle was out for a duck, scoring zero.

The crowd roared and the yellow shirts on the field went into a frenzy knowing they got the biggest wicket. 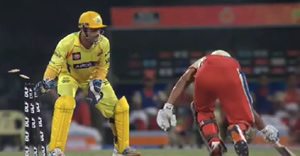 RCB at 6-1 had to now settle for the rest of the team to try and win this game which looked more and more like CSK’s final. Aggarwal was bowled by Ashwin leaving RCB at 16-2. The partnership of V Kholi and AB de Villiers began to shape when they reached 46-2 but then de Villiers was bowled out after reaching 18 runs.

Suresh Raina then came to bowl for CSK to Pomersbach and Kholi at 50-3. Then, came in Jakati to bowl who caught Pomersbach with a great catch after bowling. Followed by Kholi’s demise by Suresh Raina. RCB’s misery continued with Vettori being bowled out for a duck by CSK’s outstanding bowler Ashwin.

RCB then carried on trying to see if they could salvage anything but it seemed a loss cause at 79-6. Tiwary and Mithun reached 92-7 for RCB until Mithun was then caught by Bollinger of the Chennai Super Kings, making their win look more and more likely. Zahir Khan came on as the next batsman for RCB to team up with Tiwary facing the balls from Bravo, when they eventually RCB reached 100-7. Still leaving them 109 runs from 32 balls to get to win. 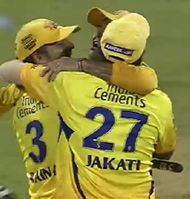 Tiwary and Khan continued to make runs at 125-7 needing 81 from 14 balls to win but it was evidently a major feat for the Challengers with the game being pretty one sided since the demise of Gayle which triggered wickets to fall one after the other.

MS Dhoni’s team in yellow looked pretty comfortable by this point with the win in the horizon. The captain made some excellent decisions on the field to help CSK win the silverware. Bollinger then dismissed Zahir Khan who was caught by Hussey at the score of 133-8 for RCB. The last bowl of the final left RCB at 147-8. CSK had defended their title in sheer cricketing style.

As expected the game then ended with a huge and worthy win for the Chennai Super Kings who won by 58 runs and once again proved they were still the champions of this biggest domestic cricket tournament in the world.

Baldev enjoys sports, reading and meeting people of interest. In between his social life he loves to write. He quotes Groucho Marx - "The two most engaging powers of an author are to make new things familiar, and familiar things new."
IPL 2011 Cricket Schedule
India’s Women Athletes on Steroids