West Indies has won the fourth T20 World Cup, outplaying home favourites Sri Lanka at Colombo before a huge crowd, with over a billion watching on television in 60 countries around the world.

In front of a sell out crowd of 35,000, the largest to watch a final game at the Premadasa Stadium, West Indies didn’t allow Sri Lanka to dominate once they had posted a modest total of 137 in twenty overs.

Sri Lanka, otherwise known as the Lions, on another day, would have gone about their business in an entirely different manner. But on a day touted as a battle between ‘Calypso and Baila’, the otherwise proficient Sri Lankan team struggled, playing like novices in many phases of the match. 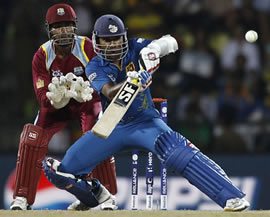 Don’t get misled by the convincing margin of 36 runs, which separated the two finalists. For a brief period at the start of the West Indian innings, Sri Lanka looked like dominating the match and one thought under favourable home conditions they would coast to the target of 138. Whenever they came remotely close to gaining control West Indies struck through Marlon Samuels and a new look bowling line up not often associated with the team from the Caribbean.

It seemed there was a rare lack of self-belief in the attitude of the Sri Lankan batsmen, considering that they had performed much better prior to the final.

While the Lions collapsed to their 2nd defeat in World T20 finals, West Indies won their maiden Twenty20 World Cup. In 2009, Pakistan’s ‘Boom Boom’ Afridi mesmerised them at Lords, and now in 2012, Sri Lanka were defeated by West Indies, led by an inspirational Darren Sammy.

One by one, cricketing forces in this World Cup had been eliminated, including the patchy Indian team, which did not surpass the super eight stages, and the unpredictable Pakistan team losing in the semi finals having made consecutive selection blunders. For Sri Lanka and West Indies there had been supreme optimism and the joy of simply taking part.

After winning the toss, West Indies elected to bat, knowing that this dry wicket would be extremely difficult to face when chasing. With the weather conditions favouring the team batting first in case of the game being shortened due to rain, Sammy’s decision didn’t come as a surprise. 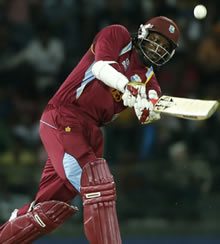 But when, both openers Johnson Charles and ‘box office’ Chris Gayle were back in the pavilion with only 14 runs on the board, West Indies were forced onto the defensive, be it temporarily. Marlon Samuels and Dwayne Bravo added a crucial 3rd wicket partnership of fifty-nine to retrieve the situation. Samuels, once banned for providing team information to an alleged bookmaker, then accelerated the scoring rate with some exhilarating shots.

Samuels and Bravo had made sure that West Indies got themselves into an ideal position, where the late middle order could launch a final onslaught.Kieron Pollard one of the heroes of the semi final victory against the Aussies, alongside Andre Russell fell cheaply, while Samuels blasted the Sri Lankan bowlers.

Captain Darren Sammy who joined Samuels in the 16th over was also in devastating mode. He stroked the ball powerfully adding 21 runs with the flamboyant Samuels. Their justly hitting brought the Windies total so close to 140 in the allotted twenty overs. After the wicket of Samuels, Sammy added a 7th wicket partnership of twenty-nine runs with wicketkeeper batsman Dinesh Ramdin.

A half century by Samuel and Bravo’s 19 stabilised the innings, whilst the fireworks of Sammy combined with Samuels commanding innings made the West Indies score more competitive.

Like the West Indies, Sri Lanka also got off to a disastrous start, chasing 138. Dilshan was out on a duck to a real ‘Jaffa’ bowled by Rampaul when the Sri Lankan score was a mere six.

Jayawardene and Sangakkara had the potential of cutting loose, but they refrained from doing so. Instead they kept their heads, playing the odd shot here and there. Sammy brought leg break bowler Badree early on and he soon took the wicket of Sangakkara, caught on the leg side boundary by Pollard. Sammy then bowled the out of form Matthews for one run and at 51 for three, Sri Lanka were in a spot of bother. 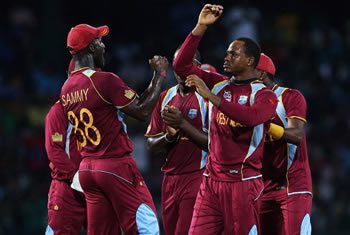 With the introduction of the talented off-spinner Narine, captain Jayawardene was out on 33 playing a reverse sweep. This was just the start to a major collapse with a further three wickets falling in close succession and at 69 for seven they were in dire straits.

Bowlers Kulasekara and Malinga launched a mini fight back with the former hitting Rampaul for 3 fours in one over to give their fans a glimmer of hope. Sammy was forced to bring back Narine for the decisive blow. It was a day when everything was going Sammy’s way. Sunil Narine responded by removing the dangerous Kulasekera on 26 off thirteen balls. Sammy followed suit by taking the wicket of Ajantha Mendis.

The West Indian bowlers proved hard nuts to be cracked on this day. Even the part-time right arm spinner Samuels got away with an economical rate to seal a perfect day for him. Ravi Rampaul proved the most expensive among the lot, but he claimed the key wicket of Dilshan to put early brakes on the Sri Lankans. Narine had the distinction of claiming the last Sri Lankan wicket, which meant the cup had been won. And a few moments later Sammy was hoisting the glittering trophy.

Marlon Samuels who scored a rapid 78 off fifty-six balls, including 3 fours and 6 sixes was declared man of the match.

The odds for a West Indian win at the start of the tournament were not so high, but as they say ‘Fortune favours the brave’. The superb innings from a previously estranged Chris Gayle against Australia in the semi finals, spurred the team to success.

With his own all round performance, ‘Mr. Nice Guy’, Darren Sammy described victory as a moment “We’re going to live forever.” Player of the match, Marlon Samuels echoed similar sentiments when he explained how much this world cup meant to “Jamaica and the West Indies.”

In truth this World T20 was a mix bag for the old and young. A fit again Shane Watson from Australia rightly won the ‘Player of the series’ award. Whilst a bright future lies ahead for youngsters, Steven Finn [Eng], Alex Hales [Eng] Raza Hassan [Pak], Nasir Jamshed [Pak], Virat Kohli [Ind] and Sunil Narine [WI].

A special mention for Australian Simon Taufel who said his farewell to international umpiring, after officiating in the World T20 final.

In this final, we witnessed West Indies cricket on top of the world, players and fans were dancing in style, celebrating a well-deserved victory, whilst commiserations go to Sri Lanka.

Faisal has creative experience in the fusion of media and communication and research which increase awareness of global issues in post-conflict, emerging and democratic societies. His life motto is: "persevere, for success is near..."
Twenty20 Cricket World Cup 2012
Sania Mirza to launch Tennis Academy in 2013