Pakistan beat the West Indies by eleven runs in the 2nd T20 match at Kingstown, St Vincent. Debutant Zulfiqar Babar was adjudged Player of the Series. Pakistan moves to 2nd position in the ICC T20 Rankings after winning the series 2-0.

"I was comfortable with the score of 135 as we had four spinners in the team."

Pakistan defeated the West Indies by eleven runs in the final game of the two match T20 series played at Kingstown, St. Vincent on 28 July 2013. The Prime Minister of St. Vincent and Grenadines, Ralph Gonsalves was present in the ground along with a partisan home crowd to witness a very exciting match.

Pakistan won the first T20 against the West Indies a day earlier, in a last ball six scored by Zulfiqar Babar, after some explosive batting from Boom Boom Shahid Afridi. Saturday’s match was the first defeat for the reigning World T20 Champions since they lifted the trophy in October 2012.

In the second T20 match played at the Arnos Vale Ground, Pakistan won the toss and elected to bat first. Pakistan made three changes from the last game. 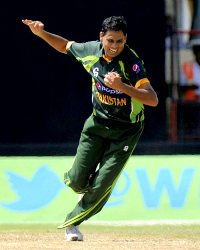 The condition of the wicket was a relatively tired and dry surface, causing a puff of dust to rise when the ball bounced. Thus batting first was a correct decision for Pakistan.

On another hot day in this exotic Caribbean Island, Pakistan did not exactly start as they would have hoped for. Pakistan had lost three wickets by the eighth over with Mohammad Hafeez [10], Umar Amin [7] and Harris Sohail [1] all falling cheaply, leaving the visitors at 42-3.

Opening batsman Ahmed Shehzad [46: four 4s and two 6s] was going along nicely before he was caught six runs short of his half century. This was another blow for Pakistan in their quest to make a big score.

However, Umar Akmal came to the party, hitting forty-six [unbeaten] runs off 36 balls. Pakistan had crossed the hundred run mark at this stage for the loss of five wickets. Unfortunately Akmal did not get support from the other end as Shahid Afridi [6], Hammad Azam [1] and Sohail Tanvir [0] all went back to the pavilion for single digit scores. 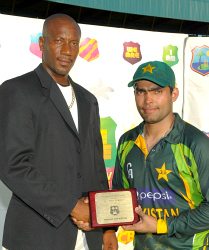 The tourists eventually set the hosts a target of 136 in twenty overs, courtesy of some big hits from Akmal.

Once again Babar was there right till the end, remaining unbeaten on eleven runs, which included a fine [cut] boundary to the Deep backward point region. His crucial twenty-six runs partnership with Akmal enabled Pakistan to reach a respectable score on this wicket.

In reply the Windies started in the worst possible fashion, losing the wickets of Johnson Charles [0], Chris Gayle [1] Marlon Samuels [1] and Lendl Simmons[3] by the eighth over.

West Indies on 17-4 were now facing an almost impossible task. Heads dropped in the ground too, with the camera focusing on a man in the crowd wearing a T-Shirt saying, ‘Worst Indies.’

Dwayne Bravo and Sunil Narine then tried to resurrect the West Indies chase, as they were 47-4 in the 12th over. Mystery spinner Saeed Ajmal put an end to this partnership by sending Narine back for twenty-eight runs off 16 balls.

All rounder Kieron Pollard then came in to hit some lusty blows, as he scored twenty runs from the first four balls off Babar’s final over. However Pollard was caught by Sohail for twenty-three runs in the very same over. 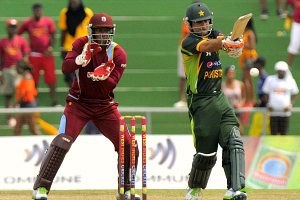 Everything now rested on the shoulders of Bravo who was still at the crease. But the very next ball saw the West Indies chase tumble, as Bravo [35] followed Pollard back to the stands with the hosts on 94-7 after seventeen overs. This proved to be quite an eventful over and another turning point in the match.

Christopher Barnwell stepped up to the plate and struck two boundaries off Afridi’s bowling to take the hosts past hundred runs. Afridi had the last laugh as the final ball of his spell led to Barnwell [10] getting run out thanks to Azam and Akmal.

Tino Best came on to see a Darren Sammy catch dropped. But two balls later Sammy, perhaps out of desperation, was caught by Afridi off Ajmal’s bowling for one run.

Pakistan finally finished the game with an eleven run win, ending the two match series 2-0 in their favour. West Indies could only manage 124-9 in their allotted twenty overs.

A jubilant Umar Akmal who was presented with the Player of the Match award, acknowledged his teammates, saying: “The seniors supported me well and the management also backed me.”

Pakistan skipper Mohammad Hafeez, speaking to the media said: “I was comfortable with the score of 135 as we had four spinners in the team.”

“Credit goes to the team and the coaches. We had no rest on this tour. Some of the youngsters made an impression while Afridi gave us the experience,” added Hafeez.

Player of the Series went to Zulfiqar Babar, helped by his five wickets in the series. Babar said: “It is the blessings of my mother and father that I have reached this far. In T20I, my idea was to contain the runs and I am glad that I got the wickets.” 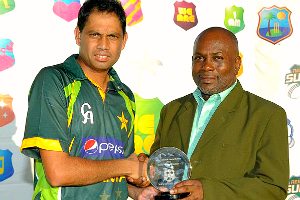 West Indies captain Darren Sammy appeared disappointed: “We could have restricted them a bit more. We did not capitalise on the first six overs and we batted poorly. We need to play well at home. I want to congratulate the Pakistani team,” he said.

Analysing the tour of the West Indies, former Pakistan opener, Mohsin Hassan Khan said: “Pakistan deserved this series win. Shahid Afridi is a match-winner and his experience is a positive sign.”

This has been a successful end to the Caribbean tour for Pakistan, wrapping up T20 and ODI series wins. The Men in Green have managed to move from 4th place to 2nd in the ICC T20 rankings, leapfrogging India in the process and hot on the tails of Sri Lanka. West Indies have dropped to 4th position.

Rupen has been passionate about writing since childhood. Tanzanian born, Rupen grew up in London and also lived and studied in exotic India and vibrant Liverpool. His motto is: “Think positive and the rest will follow.”
Pakistan clinch series win against West Indies
Liverpool handbook bans Offensive Terminology