Pakistan beat South Africa by 95 runs to win the two-match T20 series 1-0. South Africa was bowled out for their lowest total in a T20 International.

Gul was clearly on song with the wicket of Ontong to leave South Africa reeling on 51 for four.

Pakistan thrashed South Africa by ninety-five runs in what turned out to be a one sided affair at the SuperSport Park ground in Centurion, South Africa.

This was a significant win for Pakistan considering they had suffered a whitewash in the Test Series.

Pakistan captain Mohammad Hafeez who led his team to a much needed victory said: “Our mindset was clear, we had to be positive. We were eager to perform well because we didn’t have a good time in the test matches.”

After the wash out in Durban, the second T20 International became the series decider. The first match was abandoned without a ball being bowled.

This format of the game was always going to suit the psyche of the Pakistan players. Pakistan recalled their star players for the Twenty20 series, including Shahid Afridi and the Akmal brothers. On the other hand South Africa were missing some of their big names due to injury or rest. 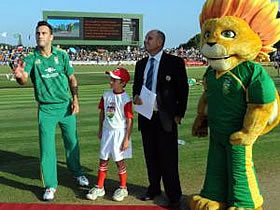 Pakistan won the toss and decided to bat on a grease-lightening outfield, perfect for batting. South Africa took the field, led by their new captain Faf du Plessis. After losing Nasir Jamshed cheaply for thirteen runs, it was down to opener Ahmed Shehzad and captain Mohammad Hafeez to build the innings. They both kept the score board ticking and were particularly severe against South Africa’s spin bowlers. Justin Ontong and Robin Peterson went for over 12 runs per over as they were smacked to all parts of the ground.

The second wicket partnership, which contributed eighty-three runs ended when Shehzad was run out for a brilliant 46 off twenty-five balls [6 fours and 2 sixes]. Hafeez’s swashbuckling knock of eighty-six runs contained 9 fours and 4 sixes.

After Hafeez was out hit wicket, Pakistan suffered a mini collapse losing Shoaib Malik and Kamran Akmal in quick succession. The loss of these two wickets saw a clear shift in momentum in the latter part of the Pakistan innings. Afridi scored nineteen runs at the end, guiding Pakistan to a massive total of 195 for seven in their allotted twenty overs. 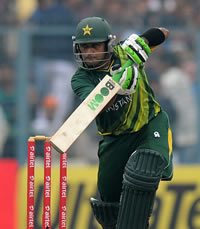 Pakistan would have been disappointed as they were on course to make 200+ at one stage. Nevertheless this was a good total in the context of average scores made at this ground. The Pakistani batsmen played some wonderful strokes throughout their innings. The best bowler for South Africa was Rory Kleinveldt who picked up two wickets for 27.

Set 196 runs to win, South Africa got off to a terrible start when they lost opener Henry Davids for seven runs. He was deceived by a clever slower delivery bowled by Junaid Khan. Following his exit fellow opener AB de Villiers unleashed an array of attacking shots, giving South Africa just the start they were hoping for.

Alert to the situation Hafeez introduced Umar Gul into the attack. Gul devastated the home side with three wickets in his very first over. Gul was clearly on song with the wicket of Ontong to leave South Africa reeling on 51 for four. When the chasing team loses 3+ wickets inside six overs, it only has a 25% chance of winning the match. In the case of South Africa they needed a miracle to reverse their fate.

De Villiers was in good touch before being bowled out by 7ft tall Mohammed Irfan. He was top scorer for South Africa with a rapid 36 off twenty-two balls [4 fours and 2 sixes]. Shehzad was exceptional in the field, bringing off spectacular catches to dismiss Farhaan Berhadien and David Miller.

Apart from De Villiers the only other batsmen to reach double figures were Peterson [13] and Kleinveldt [22].  The latter two attempted to counter attack, but they only succeeded in delaying the inevitable. Hafeez who already had a good day with the bat claimed three dismissals.

Gul had the final laugh when he took the wicket of Kyle Abbbot to complete a comfortable victory for Pakistan. Gul finished with 5-6 in 2.2 overs – his second fiver in T20 Internationals. A smiling Hafeez praised Umar Gul and said he was simply “outstanding” and is “always good in this format.”

Man of the Match Hafeez was very pleased with his own performance and said: “I knew that I was playing very well in the nets, it’s just that I was getting good balls in the Test series and that was disappointing.”

“But I stayed positive, the coaches kept me positive and worked hard with me,” he added. 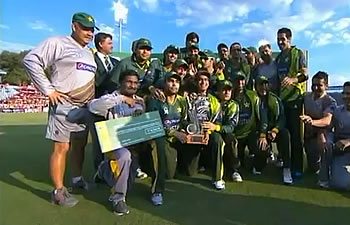 The South Africans were bowled out for 100 in 12.2 overs. After a scintillating start South Africa had succumbed to pressure once again. The South African batsmen could not really take charge against Pakistan’s lethal bowling attack. South Africa lost the game in the first six overs, losing too many early wickets. With this victory Pakistan has now beaten South Africa two matches on the trot in this format of the game.

South Africa’s captain Faf du Plessis acknowledged his team had lost to the better side on the day. He said: “Pakistan’s skill is better than ours,” referring to the shorter format of the game.

Pakistan was a different side to the one that got demolished in the Test Series. All eyes will now be on the final leg of the tour, consisting of five One Day Internationals starting on 10th March 2013. Openers Graeme Smith and Hashim Amla and fast bowler Dale Steyn all return for South Africa. Pakistan ODI squad includes batsmen Misbah-ul-Haq, Younis Khan and Asad Shafiq.

Faisal has creative experience in the fusion of media and communication and research which increase awareness of global issues in post-conflict, emerging and democratic societies. His life motto is: "persevere, for success is near..."
Farah Khan a Choreographer for IPL 2013
Cricket is the Sport for Salma Bi