India comfortably beat Pakistan by seven wickets in the opening Group 2 game of the ICC T20 Cricket World Cup 2014 at the Shere Bangla National Stadium in Dhaka. Amit Mishra was declared player of the match for his 2-22.

"Rohit and Dhawan gave us a good start and Kohli and Raina capitalised on that."

India convincingly beat arch-rivals Pakistan by seven wickets in the first Group 2 game of the ICC T20 Cricket World Cup 2014. The high intensity encounter was played in front of a sell out crowd at the Shere Bangla National Stadium in Dhaka on 21 March, 2014.

With this win, the Men in Blue maintained their record of never having lost to Pakistan in a World Cup match. Many would also say this was a sweet revenge for the loss in the Asia Cup 2014.

Described as The Mother of All Games, fans were expecting another classic. But on this occasion it was an easy win for Team India. India made 131-3 off 18.3 overs in reply to Pakistan’s 130-7 in 20 overs. 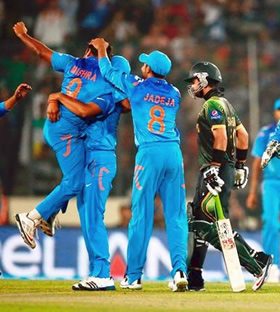 A delighted Amit Mishra who received the man of the match award said: “I did some hard work, I’m very happy we won this match. I’m always thinking of going for wickets, and building up pressure. MS gave me a lot of support today, the sort of support you need as a bowler.”

India won the toss and elected to field on a batting friendly pitch which definitely had something for the spinners.

It was India who drew first blood. Big hitter Kamran Akmal (8) was run out in the second over of the innings to leave Pakistan 9-1. It was a terrible mix up with opener and culprit Ahmed Shehzad.

Indian captain, MS Dhoni played three spinners in the match, with Amit Mishra being the pick of the bowlers for his 2-22 off four overs.

Mishra cleverly dismissed Ahmed Shezad for twenty-two, as he charged up to a delivery which spun the other way. He then got the key wicket of Shoaib Malik (18) who mistimed his shot straight to Suresh Raina at long off.

The problem for Pakistan was that they kept losing wickets at regular intervals. Ravindra Jadeja struck in his first over as he dismissed Mohammad Hafeez for just fifteen runs. Attempting a big shot, Bhuvneshwar Kumar came running in from the deep to take a sharp catch of the Pakistan captain.

The only batsman from the Pakistan team to cross thirty was Umar Akmal. He scored 33 runs off 30 balls. 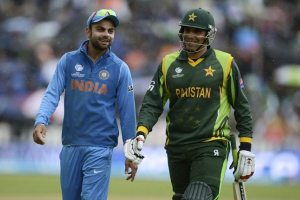 Shahid Afridi came in at number six, but he too had an early exit as Raina caught him at mid wicket after scoring only eight runs.

Sohaib Maqsood hit a few lusty blows in the final over, as Pakistan finished with a below par score of 130-7 in their allotted twenty overs.

After a short break, the Indian openers came into bat and put on a crucial fifty-four runs stand. Shikhar Dhawan (30) and Rohit Sharma (24) began slowly, but gave India just the platform they needed.

India then lost three wickets in the space of twelve runs, including that of Yuvraj Singh (1) who was out to a beautiful yorker by Bilawal Bhatti.

With India in a spot of bother at 65-3, Raina and Virat Kohli batted together to swing the momentum completely in India’s favour. 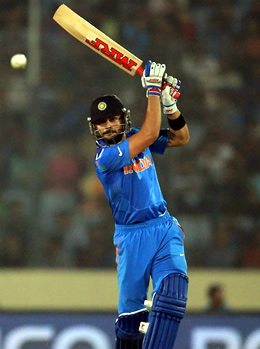 The partnership between Kohli and Raina proved crucial at the end. Kohli remained unbeaten on 36 off 32 balls, while Raina was not-out on 35 off 28 balls.

MS Dhoni, reflecting on the game said: “There were a few dropped catches and it would have been better if we had taken them. But apart from that, it was a fantastic game.”

He continued: “Rohit and Dhawan gave us a good start and Kohli and Raina capitalised on that. It is good to see Raina among the runs, because with him around it gives us the firepower in the middle order.” 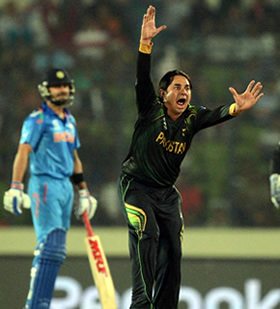 This defeat does not signal the end for Pakistan, but they must now win all there remaining games against Australia, Bangladesh and West Indies.

Speaking to the media, a disappointed Mohammad Hafeez diplomatically said: “We were 20 runs short, we also dropped some catches, we have to take them in matches like this. Long way to go in this tournament.”

Elsewhere, Netherlands astonishingly qualified for the Super 10 stage after scoring a mammoth 193 in 13.5 overs against fellow associates Ireland. The Dutch side hit a record nineteen sixes in their innings to send Ireland and Zimbabwe crashing out of the tournament.

A day earlier hosts Bangladesh surprisingly lost to Hong Kong by two wickets, but advanced to the Super 10 stage on net run rate.

India take on defending champions West Indies on Sunday 23rd March 2014. Pakistan will play their second match against Australia on the same date. Both matches will be played in the capital city, Dhaka.

Faisal has creative experience in the fusion of media and communication and research which increase awareness of global issues in post-conflict, emerging and democratic societies. His life motto is: "persevere, for success is near..."
ICC World T20 2014 ~ India vs Pakistan
Pakistan and India Triumph in World T20