Pakistan beat Australia by sixteen runs in a high-voltage Group 2 game of the ICC World T20 2014. India defeated defending champions West Indies by seven wickets to complete their second win in the Group of Death.

"I've done a lot of hard work in the nets for my variations and I'm happy they are coming out well."

India completed their second win in the Group of Death, as they beat West Indies by seven wickets. India continued their unbeaten run in the tournament and are top of Group 2, followed by Pakistan in second place.

On a Super Sunday, both matches took place at the Shere Bangla National Stadium in Dhaka on 23 March, 2014. Four of the best T20 sides were in action, including three former world champions in this format. 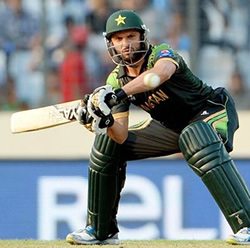 In the first match of the day Australia won the toss and elected to bowl first on a batting wicket, which also had something for the spinners. Pakistan made one change to their line up, bringing slow left-arm spinner Zulfiqar Babar in place of Junaid Khan.

Having lost the opening game against India by seven wickets, Pakistan performed much better against Australia. Batting first, the Men in Green put up a huge total of 191-5 in 20 overs. The star of the match was Umar Akmal who smashed 94 runs off just 54 balls, which included nine 4s and four 6s.

With Pakistan toiling on 25-2, Umar shared a fantastic 96 run partnership with brother and wicket-keeper Kamran Akmal (31). Interestingly Umar was dropped on twenty-three by Brad Hogg off Nile-Coulter. Affected by cramp, Umar fell six runs short of a century when he was caught at long on by Glenn Maxwell off Mitchell Starc. 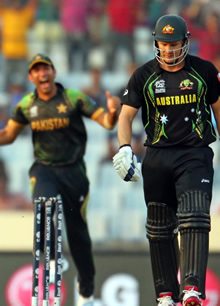 In reply Australia put up a good performance, with Maxwell hitting 74 off 33 balls and Aaron Finch scoring sixty-five runs. But their third wicket partnership of 118 runs was not enough, as Australia lost eight wickets for fifty-eight runs in the last ten overs.

Afridi dismissed the dangerous Maxwell who was caught at deep mid wicket by Ahmed Shehzad. Then Saeed Ajmal bowled a superb 18th over, taking the key wicket of Finch and conceding only one run. This was the final nail in the coffin for the team Down Under.

Australia were eventually bowled out for 175, as the 2009 champions won the match by sixteen runs.

Pakistan would be very pleased with there bowling, as they did not concede a single wide, and only bowled one no-ball in the match.

Speaking to the media, Pakistan captain, Mohammad Hafeez said: “Umar Akmal showed his talent today. He held his nerve very well. He attacked and that’s what we wanted our boys to do.”

Pakistan’s first win in the Super 10 Stage has put them right back in the reckoning and will give them a lot of confident going ahead. The victory was a special gift to the nation as fans were also commemorating Pakistan Resolution Day. 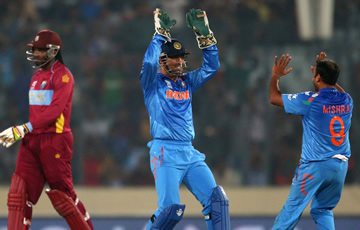 In the other match of the day, MS Dhoni won the toss and opted to bowl first. The Men in Blue were unchanged from the team, which beat Pakistan two days earlier.

After a very slow start, Dwayne Smith was caught and bowled by Ravichandran Ashwin for eleven to leave West Indies on 38-1. Opener Chris Gayle was then dropped twice before being run out on thirty-four. During his brief innings he hit two 6s and one 4.

The Windies hit twenty-one runs off the final over, but still finished with a below par score of 129-7 in their twenty overs. Six of the seven wickets were taken by the Indian spinners.

India came to bat and lost Shikhar Dhawan (0) early to a contentious lbw decision. But then Virat Kohli took charge of the run chase. Kohli was well supported by Rohit Sharma who stayed unbeaten on 62 off 55 balls. 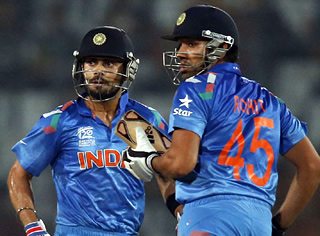 Kohli and Sharma put on a massive 106 runs partnership. After another Kohlicious knock, Virat was clean bowled by Andre Russsel for fifty-four runs.

With one run needed off three balls, Yuvraj Singh had another disappointing outing, as he was dismissed for just ten runs. But India were never really under pressure, as Suresh Raina walked in and hit the winning runs.

Receiving his second man of the match award in a row, Amit Mishra said: “I’ve done a lot of hard work in the nets for my variations and I’m happy they are coming out well.”

Playing in only his third T20 International, this is a remarkable achievement by Mishra. His addition to the team has definitely lifted India’s morale.

To round up Saturdays’ games: Sri Lanka beat South Africa by five wickets in the Group 1 match played in Chittagong. New Zealand defeated England by nine runs through the Duckworth-Lewis formula. The Group 1 game played at the Zahur Chowdhury Stadium was sadly interrupted by rain.

Faisal has creative experience in the fusion of media and communication and research which increase awareness of global issues in post-conflict, emerging and democratic societies. His life motto is: "persevere, for success is near..."
India crush Pakistan in World T20 2014
Premier League Football 2013/2014 Week 28