Pakistan demolished Bangladesh by fifty runs in their penultimate Group 2 game of the ICC World T20 2014 in Dhaka. Ahmed Shehzad became the youngest and first Pakistan player to smash a hundred in a T20 International.

"I had a very good start and thought I can bat through the innings."

Pakistan crushed Bangladesh by fifty runs in a crucial Group 2 game of the ICC World T20 2014.

The Green Shirts won thanks to an unbeaten 111 off 62 balls from Ahmed Shehzad at the Shere Bangla National Stadium in Dhaka on 30 March, 2014.

Once Pakistan posted a score of 190, it was always going to be a tough ask for the Bangladesh team. The Tigers never really got going, as they lost wickets at regular intervals.

Umar Gul took 3-30 as the hosts fell way short of the target. With this result Australia were knocked out of the tournament, prior to their match against India late in the day.

Batting first, Pakistan got off to a terrific start, with three 4’s and a six coming off the third over. After an opening stand of forty-three, Kamran Akmal departed for nine as he was caught brilliantly by Ziaur Rahman at short fine leg off Abdur Razzak. 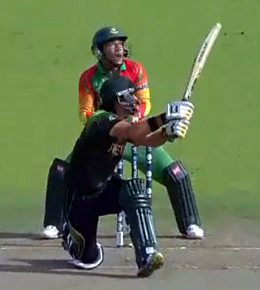 Further wickets fell (Mohammad Hafeez 8, Umar Akmal 0) in quick succession to the spinners as Pakistan were briefly held back at 71-3. But then Shehzad and the experienced Shoaib Malik (26) put on a healthy fifth wicket partnership of seventy-three runs.

Shehzad carried the Pakistan innings as he hit 10 4’s and five 6’s on his way to the highest ever T20 score by a Pakistan batsman. This was also the first hundred for any Pakistan cricketer in World T20 cricket.

Shehzad finished not out on 111, whilst Boom Boom Shahid Afridi’s 22 off 9 balls saw Pakistan reach a mammoth total 190-5 in their twenty overs.

Speaking about his time on the crease and the innings of Shehzad, Shoaib Malik said: “I had almost 10 overs and I tried to bat along the ground. I think words are not enough to describe the way he (Shehzad) batted today.”

In reply, Bangladesh reached thirty without loss, before Gul bowled out Tamim Iqbal for sixteen. Three more wickets effectively ended the hopes of Bangladesh as they were struggling on 47-4. 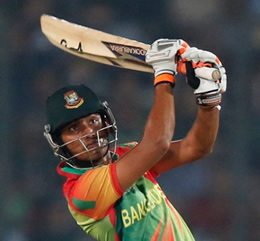 Anamul Haque looked good early on but went cheaply in the end as he was caught and bowled by Saeed Ajmal for eighteen. Shamsur was caught behind off Shahid Afridi for just four runs. Captain Mushfiqur Rahim followed next as he was out lbw to Zulfiqar Babar for two.

Shakib Al Hasan was the lone warrior in the middle for Bangladesh. But with the run rate massively creeping up Shakib tried to play too many shots as he was caught inside the circle by Umar Akmal for thirty-six.

Nasir Hossain was then stumped by wicket keeper Kamran Akmal off Ajmal after making twenty-three.

Though Mahmadullah and Mashrafe Mortaza picked up seventeen runs with ease, in the end they could only manage 140-7. Bangladesh were never in the hunt as Pakistan cruised to victory by fifty runs.

Pakistan’s bowling was very impressive, with Gul leading the way. Gul has always been amongst the wicket takers in this format of the game. Ajmal had another great performance, bowling three overs and takings two wickets. Afridi took 4-21 in his four overs as well. 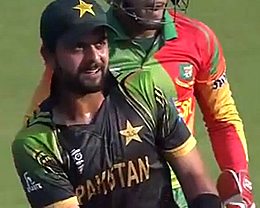 Speaking about team tactics and his batting, the young promising Shehzad said: “For me it’s very important to follow the team plans. I didn’t want to let the team down. I stuck to my basics and delivered. I had a very good start and thought I can bat through the innings.”

With Bangladesh now out of the tournament, a disappointed Mushfiqur Rahim said: “When you are chasing a big target, you need someone from top four to bat all the way, but that didn’t happen today.”

Captain Mohammad Hafeez appreciating Pakistan’s outstanding display throughout the match said: “It is a great effort from the boys. Everyone knew how important these games were.”

“A special knock from Ahmed Shehzad. He was a little under pressure before the game, but the management gave him the support. He has all the shots and today he showed it in his game,” he added.

This was Pakistan’s second win in the competition. They are a team who will continually threaten. They have an important game coming up against the West Indies on 01 April, 2014. The winner of this game will go through to the semi-finals with India.

In the second match of the day, India defeated Australia by seventy-three runs to complete their 4th consecutive win. Australia were all out for 86 in reply to India’s 159-7 in 20 overs.

Elsewhere, South Africa beat England by three runs to qualify for the semi-finals. AB de Villiers hit an unbeaten 69 off 28 balls as South Africa posted a total of 196-5 in 20 overs. Imran Tahir took 2-27 as England were eliminated from the competition.

New Zealand will face Sri Lanka on 31 March, 2014. The winner of this game will also advance to the semi-finals. The tournament is getting very interesting and is now wide open. If we all had the gift of prophecy, we would be much better off.

Faisal has creative experience in the fusion of media and communication and research which increase awareness of global issues in post-conflict, emerging and democratic societies. His life motto is: "persevere, for success is near..."
India reach Semi-Finals of World T20 2014
Premier League Football 2013/2014 Week 30