Mohammed Hafeez and Shoaib Malik smashed superb half centuries, giving Pakistan a thrilling five-wicket win over India in Bangalore. Pakistan takes a 1-0 lead in the two match 20/20 series. Pakistan fans could not have wished for a better present on the day, which marked the birthday of Muhammad Ali Jinnah [1876-1948], the father of the nation.

India, Pakistan matches are often described as the mother and father of all games

Pakistan surprised India with a sterling performance, finally beating them for the first time in their T20 win. The nail-biting game was played in Bangalore, the IT capital of India.

Pakistan had lost to India at the same ground in the quarter-finals of the 1996 ODI World cup. This is the first bilateral series between the two teams since 2007.

The victory came as a double celebration for Pakistan, as everyone rejoiced with the nation on Quaid Day. 25th December 2012, was the 136th birth anniversary of Muhammad Ali Jinnah [Quaid-e-Azam], the creating founder of Pakistan. Pakistan’s players observed the day in style, with a brilliant performance.

At the post match ceremony, Pakistan captain Mohammed Hafeez dedicated this victory in memory and respect of this charismatic leader. He said: “It is a gift for the whole nation, it is Quaid day back home.”

The M.Chinnaswamy Stadium was the venue of the clash between the two traditional archrivals. India, Pakistan matches are often described as the mother and father of all games. Away from the tensions in the sub – continent, it was thought to be a match, which either team could win.

Going into the match one of the key differentiators was Saeed Ajmal, the leading wicket taker in T20 cricket – one cannot emphasise enough how good a bowler he is.  Secondly Pakistan is arguably one of the best attacking sides in the world when it comes to this format of the game. 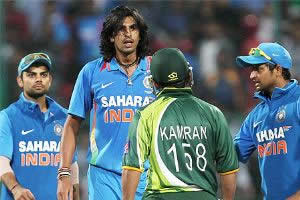 The match did nothing to dispel the image of cricket between these two great sub continental rivals as being a tense, testy affair only marginally less important than life and death. Kamran Akmal and Ishant Sharma provided the testiness. They had a full-blown row near the end, which prompted the intervention of both umpires, Shoaib Malik and Indian captain Mahendra Singh Dhoni.

The fireworks between the two started when they exchanged a few words [sledging], after Akmal, K. was beaten by an excellent delivery from Ishant. However what really triggered this episode is when Malik was declared not out after being caught off a no ball [height] bowled by Ishant. Both captains played down the incident saying these things often happen in the heat of the moment.

“It happened because of some misunderstanding between the two. The bowler said something else and the batsman understood something else. I am pleased that Ishant had not abused him. We will try to keep this in check,” MS Dhoni said.

Both players were later fined by match referee Roshan Mahanama with ‘conduct contrary to the spirit of the game.’

Pulses were clearly racing throughout the match as Gautam Gambhir and debutant fast bowler Mohammed Irfan constantly glared at each other during the start of the Indian innings. 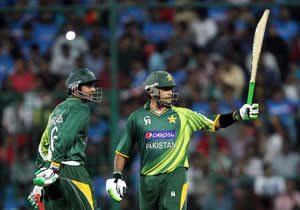 India were never in the picture after Pakistan restricted them to 133 runs. The team in blue were at least 20 runs short. India’s fate depended on Pakistan’s fragile batting line up, chasing a very modest score. However it was one of the days when the luck was not on the Indian side as Pakistan won the thrilling match with two balls to spare.

Ramiz Raja, while commentating on the match, was reluctant to predict a Pakistan win at the half way-point. The former Pakistan opener explained his team had lost to India after gaining firm control frequently in matches.

After the Indian innings he said: “Now Pakistan have to do the job with the bat.” He was indeed correct as Pakistan briefly collapsed, before Malik hit a six in the final over to claim a historic win for the green team.

Pakistan won the toss and chose to field, with the pitch having a bit of juice early on for the seamers. Dhoni was also looking to field first had he won the toss.

It proved to be the correct decision, especially with the young left arm fast bowler Irfan consistently clocking speeds of around 90mph. He troubled Gambhir early on with his raw pace and his 7ft height. He later on took the key wicket of dangerous batsman Virat Kohli who was caught behind scoring only nine runs. 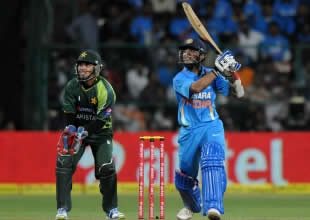 India batting first, totalled 133 for nine in their allotted twenty over’s. Ajinkya Rahane hit a stylish forty-two runs [31 balls] while Gambhir made a shaky forty-three runs  [41 balls]. Shahid Afridi has a tendency of breaking key partnerships and that is exactly what he did. Rahane got off to a good start, before he threw his wicket, getting caught in the deep extra cover region off Boom Boom’s bowling. The openers laid the foundations for a big total, before the host team lost eight wickets in 49 balls.

India couldn’t manage a huge total, because of Pakistan’s bowling. Ajmal as usual had a bag of tricks up his sleeve, bamboozling the Indian batsmen. Umar Gul who went for 13 runs in his first over, came back strongly with a fine spell of death bowling, claiming two wickets in two balls and was even on a hat trick.

Pakistan’s bowling was backed by sharp fielding in the deep, claiming two excellent run outs [Gambhir, Sharma, R.] in the process. Pakistan were hitting the stumps quite regularly, which must have pleased their fielding coach Julien Fountain. Their fielding had improved by a notch or two in this match.

Pakistan was not subjected to penetrative or hostile bowling when they went into bat, chasing 134. But they were undone by Bhuvnehswar Kumar who bowled some beautiful in-swinging deliveries, claiming 3 wickets on his T20 debut.

Hafeez and Malik batted superbly after the early loss of Nasir Jamshed, Ahmed Shezad and Umar Akmal. Malik joined Hafeez with the Pakistan score on 12-3, as the two experienced batsmen added 106 runs for the 4th wicket. 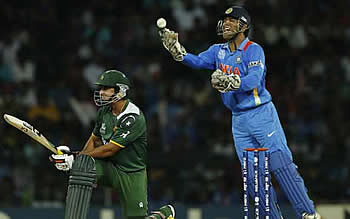 However the reintroduction of Ishant once again changed the complexion of the game. He responded with the scalp of Hafeez who hit the ball straight to third man. Ishant bowled accurately and the frustration in the Pakistan camp started creeping in.

Ashok Dinda then took the important wicket of Akmal, K. who wasted six balls to score just one run. This very predictable mini collapse of the Pakistan team, forced the match to go into the final over.  Indian spinner Ravindra Jadeja was given the ball as Pakistan needed ten runs off 6 balls.

After taking three singles off the first three balls, Malik hit a straight six off the fourth delivery to clinch Pakistan a well deserved victory. Malik remained unbeaten on fifty-seven, which included three 4’s and three towering 6’s. What a captain’s knock from Hafeez! – he was declared the man of the match for a responsible sixty-one at a healthy strike rate of 138.63.

With only one match remaining in the Twenty20 series, monsieur Dhoni and coach Duncan Fletcher need to rethink their strategy. India needs to realise that they must play an extra bowler like Ravichandran Ashwin to bolster their weak bowling line up. As for Pakistan they must improve their top order batting because they might find it difficult chasing a score of 150+.

Faisal has creative experience in the fusion of media and communication and research which increase awareness of global issues in post-conflict, emerging and democratic societies. His life motto is: "persevere, for success is near..."
India wins 2012 Men’s Kabaddi World Cup
India beat Pakistan to draw T20 series