Why did RCB win the IPL 8 Playoff Eliminator?

The Royal Challengers Bangalore (RCB) emphatically beat the Rajasthan Royals in the IPL Playoffs Eliminator. They now face Chennai Super Kings in Qualifier 2, for a place in the Final of IPL 8. DESIblitz breaks down RCB’s winning performance.

"The way Mandeep Singh played, it was definitely a Man of the Match Performance."

The Royal Challengers Bangalore (RCB) thrashed the Rajasthan Royals by 71 runs in the IPL 8 Eliminator in Pune, on Wednesday 20th May 2015.

With their victory, RCB get a chance to play in Sunday’s final when they meet the Chennai Super Kings in Qualifier 2 on Friday 22nd May 2015.

RCB’s victory against the Royals was an emphatic one, and they were better than Rajasthan in nearly every department.

Why were RCB the victors? DESIblitz analyses the 3 main factors.

RCB have a quite formidable top order batting line up. Opening the batting are the towering Chris Gayle and India’s Test captain Virat Kohli.

Then at number three you have South African captain AB De Villiers, who might just be the best one day batsmen in the game.

In this game though, the openers fell early. Prior to this match, no one else in the team had scored a fifty. And the top three had scored 74 per cent of RCB’s runs in this IPL. 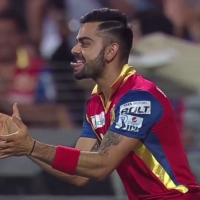 Mandeep Singh stepped up and earned his spot with a magnificent 54 from 34 balls. He and AB De Villiers put on partnership of 113 off 70 balls which was instrumental in RCB reaching their winning total.

The former Kings XI Punjab youngster was a game changer. He allowed AB De Villiers, who was stuttering through, time to settle in at the crease.

Of Mandeep Singh’s innings, AB De Villiers said: “The way Mandeep Singh played, it was definitely a Man of the Match Performance, according to me.”

De Villiers, who was the actual Man of the Match, top-scored with 66 off 38 balls. He hit some fantastic shots which included four fours, and four sixes.

The South African possesses excellent technique, timing, and temperament. If he is struggling he will show persistence and perseverance. De Villiers is a leader and someone who you can count on.

RCB took the steam out of the Royals with early wickets. Then they did not take their foot off the gas, and continued to take wickets at regular intervals throughout the innings.

In addition, the whole bowling unit was backed up by excellent fielding as they piled on the pressure. Their bowlers’ excellent economy rate saw the required run rate soar into double figures. By the end they whittled Rajasthan down to 109 all out. 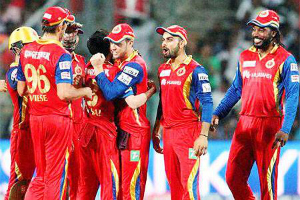 The star bowler in the RCB team is the fiercesome Australian left-arm bowler, Mitchell Starc. He is a nightmare for any right-hander with his combination of sublime pace and deviant swing.

However, in this match, it was the youngsters who produced the goods. All of the bowlers contributed with wickets.

Harshal Patel zipped in with speed and took the key wickets of Samson and Nair, both caught behind by wicket keeper Dinesh Karthik.

As was the case in Qualifier 1 the previous day, winning the toss was crucial. It is becoming common in modern-day cricket to win the toss, bat first, and post a big total. This was no doubt crucial in RCB’s victory as they amassed their total of 180-4.

In the field, Kohli was energetic and enthusiastic, and this contagion spread throughout his team. His bowlers and fielders responded with excellent performances.

The RCB fielding effort backed up their bowlers, and really put Rajasthan’s batsmen under pressure.

The highlight in the field was AB De Villiers’ dive, slide, and gather on the boundary to prevent a four. It just summed up their spirit and desire to win.

Regarded by many as a bit of hot head, Kohli remained calm, cool, and relaxed under pressure. And his strategic manoeuvring paid dividends. RCB will look to him to lead from the front in Qualifier 2.

In retrospect, it was a good all-round performance for the Royal Challengers. However, if RCB are going to reach the Final of IPL 8, they are going to have to do something which they have not yet done during this whole tournament – win three games in a row.

Qualifier 2 will feature a battle of the two India captains: Virat Kohli (RCB) and MS Dhoni (CSK). Many believe that the match in Ranchi, Dhoni’s home town, will effectively be a home game for the Chennai Super Kings.

Royal Challengers Bangalore will play the Chennai Super Kings in Qualifier 2 of the IPL 8 Playoffs at the JSCA International Stadium, in Ranchi, Jharkhand, on Friday 22nd May 2015.

The winner of that match will earn the right to face the Mumbai Indians in the Final of IPL 8, at Eden Gardens in Kolkata, on Sunday 24th May 2015.

Why did Mumbai Indians qualify for IPL 8 Final?
How has IPL revolutionised batting in Cricket?