Pakistani Adventure Runner Ziyad Rahim achieved the ‘Marathon Grand Slam’ in 41 Days and 20 hours to earn himself a place in the record books. He set the fastest time to complete a marathon on each continent and the North Pole.

“It was a great feeling, knowing that I had broken the world record”

The Guinness World Record for the fastest time to complete a marathon on all seven continents and the North Pole was set by Ziyad Rahim from Qatar on 9 April 2013.

The world record was completed at the Geographic North Pole [90N], one of the most gruelling tests of human endurance.

Rahim accomplished the ‘Marathon Grand Slam’ in 41 days and 20 hours, smashing the previous record of 324 days registered on 26 February 2007.

The North Pole Marathon organised by Polar Adventures was Rahim’s frigid finale in his successful world record attempt. Running around the globe proved a feat that stretched his physical and psychological limits. 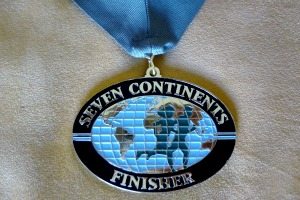 A Canadian national of Pakistani origin, the biggest motivation for breaking this record was running in aid of CARE Pakistan: “I was fundraising for CARE Pakistan; a not-for-profit organisation that provides free education to the underprivileged children in Pakistan. “All it costs is GBP 1 per month to educate one child. The organisation has a tremendous track record and they aim to educate one million children in Pakistan within the next 10 years,” says Rahim.

“Ziyad has been an Ambassador for CARE since last year and is passionate about raising funds and awareness for the charity, educating underprivileged children in Pakistan. We have followed his journey on this amazing challenge and we are all so proud of him.”

“He is truly inspirational and his determination and strength makes him a great role model for young children all over the world,” she added. 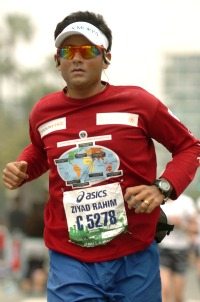 Working as Head of Market Risk at Barwa Bank in Doha, Qatar, Rahim knows a thing or two about getting the best out of people and himself.

Ziyad Rahim is a veteran of over 100 marathons in 32 countries, including 7 ultras. He is a member of the Doha Bay Running Club [DBRC], The Official 7 Continents Marathon, 1/2 Marathon & Ultra Club Inc., The Marathon Grand Slam Club and the Seven Continents Club.

Rahim enjoys street marathons and has completed extreme ultra runs such as the ‘Marathon De Sables: The Toughest Footrace on the Earth.’ In the course of this multi day race he endured challenging conditions, including varying temperatures [50-52°C in the day to 3-4°C in the night] and hallucinations.

Showing up at the first race [Punta Arenas Marathon, Chile] on 26 February 2013 was a herculean effort in itself. His journey from London to Miami was delayed, which meant that he almost missed his onward flight to South America.

But as Shakespeare wrote, ‘All’s Well That End’s Well,’ as Rahim managed to reach his destination on time: “In the end it didn’t matter as my flight to Antarctica from Punta Arenas was delayed by 3 days due to poor weather,” said the 39 year old.

Rahim’s second race [White Continent Marathon] was held at King George Island, located just off the Antarctic Peninsula on 27 February 2013. Along with the other runners he ended up doing two races in two continents within 24 hours. 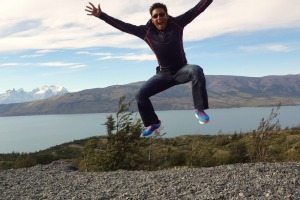 The hilly course through snow, mud and rocky streams was indeed a difficult proposition; considering most of the runners had hardly slept a wink.

After returning to Doha, it was business as usual. Therein it was back to work and spending time with the family during weekdays, before flying out virtually every weekend for the remaining six marathons.

Highlights of his next four races included: running along the Mediterranean coast and finishing in the historic city of Pafos, Cyprus [10 March], taking part in the carnivalesque course in Los Angeles [17 March ] and embarking on a long flight for New Zealand to run the ‘Dual Trail Marathon’ over volcanic rocks, hills and uneven terrain [24 March].

His fifth stop was the 56 km ‘Two Oceans Marathon’ in the beautiful city of Cape Town, South Africa on 30 March 2013. This was one of the hardest runs of the record, especially as it involved running up two mountains in blistering winds and a stiff cut off time.

In the penultimate race, he travelled to Jordan [5 April], completing the ‘Dead Sea Marathon’ at the lowest point on Earth. This race was nothing short of Royalty as he ran alongside HRH Prince Talal of Jordan.

The final challenge for Rahim was to complete the North Pole Marathon over the frozen Arctic Ocean in sub-zero temperatures. Finishing the race on what is known as the ‘coolest marathon on earth’ was not exactly a stroll in the park:

“This was the toughest race off all. With runners pounding their feet on the frozen arctic ice over and over again, the underfoot conditions started crumbing…so much so that we were in knee deep ice for most part of the course.”

Wrapped in polar specific attire, Rahim flashed a huge smile and pumped his fists triumphantly as he passed the finishing line, raising the Pakistan Flag. Rahim not only nailed the Guinness World Record, but also completed a marathon on every continent twice in two years.

A delighted Rahim told DESIblitz: “It was a great feeling, knowing that I had broken the world record and that I was the first Pakistani to set foot on the North Pole and complete a marathon there.”

To sum it all up his father Tariq Rahim, a renowned cricket commentator, said:

“Ziyad’s world record is truly an amazing achievement, which has made his family and Pakistan proud. Only a super fit athlete with such fierce determination and commitment could have achieved such a stupendous feat.”

There’s not much left for Rahim to conquer it seems. But what is definitely certain, is that Rahim, on his voyage of discovery and endurance, has inspired future generations for decades to come.