Pakistani adventure runner Ziyad Rahim has had a daring COVID-19 journey around the world. He exclusively chats to us about his inspiring Z Adventures.

"Yemen is the only country that begins with Y."

In the midst of the COVID-19 pandemic, Pakistani adventure runner, Ziyad Rahim embarked on a very interesting journey.

Ziyad could not have imagined that a trip to Pakistan would eventually take him globe trotting around the world.

It all began when he personally delivered medals to a friend in Pakistan. His friend was competing in the inaugural 2020 Yemen marathon, which Ziyad could not make.

The Yemen race and tour were organised by Ziyad’s company, Z Adventures.

Ziyad Rahim who did have a choice had a discussion with his wife Nadia Rahim before going ahead to Pakistan.

After arriving back home in Qatar, he went onto launch the Self-Isolator Circuit challenge from Doha. The circuit is proving to be a success and benefiting many people across the globe.

We take a closer look at the inspiring COVID-19 world of Z Adventures. This includes exclusive reactions from the multiple Guinness World Record holder. 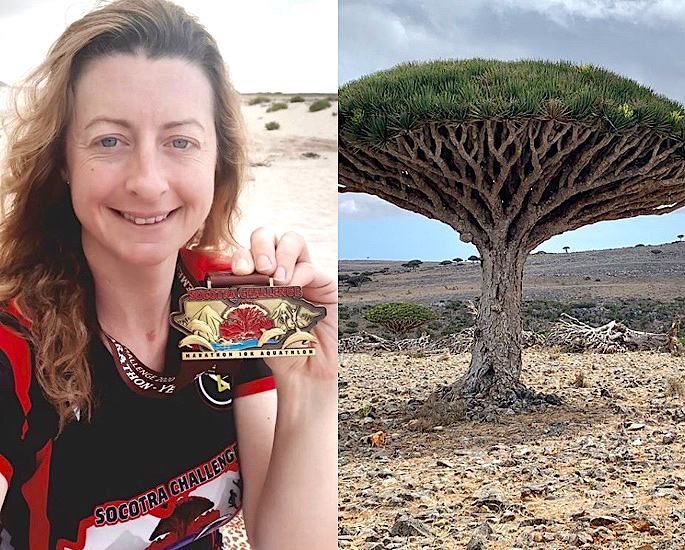 Qatar resident, Ziyad Rahim saw the start of a personal COVID-19 adventure when organising the first-ever marathon in Socotra, Yemen. The marathon took place on March 12, 2020, as part of a grand tour courtesy of his company, Z Adventures.

Ziyad revealed, four days before he was leaving for Yemen, Qatar imposed a travel restriction to Egypt on March 5, 2020. This is following the increasing outbreak of the virus in the world.

Two days later, there was a similar restriction in that no one from Qatar was able to enter Egypt.

Ziyad admits he was hit the most, especially with him being the event organiser of the marathon. And with Yemen being like a war zone, the only way to reach there was through Cairo.

He acknowledged that he did not have to worry about the 32 runners from around the world. They were not facing any issues entering Egypt.

Even though the world was heading for a lockdown, he spelt out why these runners were keen to participate in this marathon.

“My clientele is like the crazy kind – the marathon globetrotters. And some of them want to complete the A-Z of marathons. Yemen is the only country that begins with Y.”

However, Ziyad says he had to still find a solution for all the marathon medals, t-shirts and bibs that were in his possession.

So, instead of flying to Egypt, which he couldn’t, Ziyad left for Lahore, Pakistan. He spent just one night there, including going out for lunch with his parents.

Ziyad dropped all the items to friend Dr Amer Yar Khan who was flying from Pakistan to Socotra. Dr Khan was also competing as a runner in the Yemen Marathon.

Dr Khan reached Cairo from Lahore via Jeddah-Amman but without the medals and the other stuff.

So one hour before flying to Socotra (via Sayun) from Cairo, the baggage miraculously arrived in the Egyptian capital on a cargo plane from Saudia.

Ziyad’s effort going to Lahore would have simply gone to waste if the baggage hadn’t arrived prior to the Dr’s departure to Socotra.

Ever since 2015, this was the first marathon tour where he could not attend as the organiser. Despite not being there himself, his team in Yemen did a good job, including looking after the runners.

Ziyad was very thankful to good friend Dan Micola (CZE) who was also taking part in the race. Micola was a great support, guiding all the runners.

Big names from the running world participated in the marathon. Dr Brent Weigner (USA), Beth Sanden (USA) and Scott McIvor (UK) are a few to name.

The runners apparently had an adventure of their own as Cairo was closing their airspace. Thus, a special plane flew in from Cairo to pick up these runners from Socotra before the airspace was shut down. 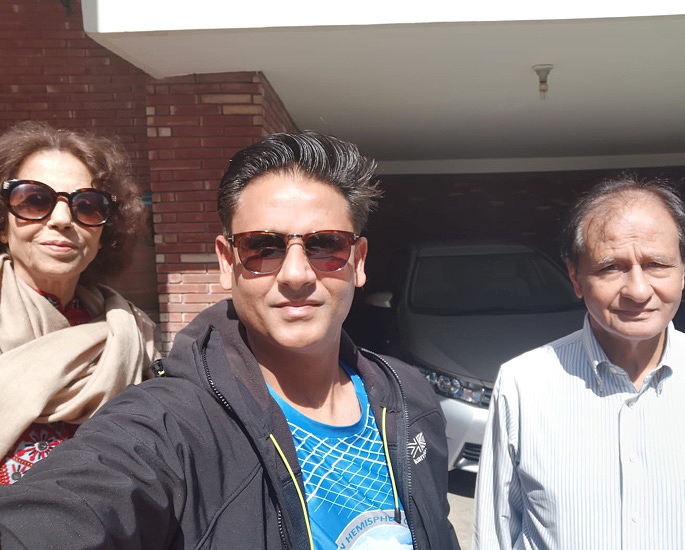 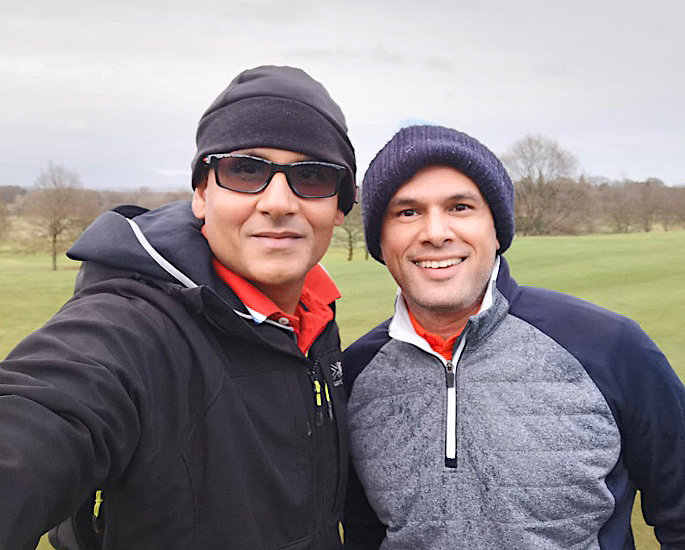 The adventure for Ziyad Rahim did not end in Lahore, as it was merely the beginning. On the day he was meant to fly back, Qatar imposed a restriction on fourteen countries including Pakistan.

Ziyad said he then tried to enter Qatar via Oman, which was denied.

He then headed for Scotland through Abu Dhabi and Dublin to serve nine days of quarantine with his elderly in-law’s in Glasgow.

Besides, playing golf and running with social distancing in mind, he was mainly self-isolating indoors.

Looking forward to reuniting with his lockdown family, he continuously had work priorities on his mind:

“Obviously there was work to be done. I had gone for two days to just hand over the medals and other stuff.”

Even though Scotland was comfortable and convenient for him, there was another twist:

“I was going to actually stay on for another two, three days. But then I found out that Qatar was closing its air space for everybody. So I got there [Qatar] one hour before the new regulation came in.”

“So had I not taken that Qatar Airways flight from Edinburgh to Doha, on that particular Monday, I would still be in Scotland.”

After landing in Doha, Ziyad tells us that he successfully passed a video imaging temperature test. Subsequently, he was advised to self-isolate at home for fourteen days.

Considering that he could only manage so much social distancing when travelling, it was a remarkable feat that Ziyad had no symptoms.

Despite Ziyad having a choice before embarking on this global adventure, he explains his positive reasoning behind the risk of travelling:

“I had a choice. I could’ve just stayed back and I could have mailed the medals to all the runners after the marathon.

“The way I operate it is when I organise the race, I want to make sure that runners get a medal at the end of the race.

“They get a trophy at the end of the race. They have a race t-shirt, they have race bibs because I organise proper marathons.

“So I put my life at risk to ensure that I follow what Z Adventures is all about.”

“At the end of the day, maybe it was an adventure.”

He also mentioned his risk assessment for Socotra. He held the view that it was an isolated island with only 5,000 people residing there.

Hence, the likelihood for contracting coronavirus in one of the safest places on earth was virtually zero

With Ziyad understanding ‘reputational risk’ it certainly was an unforgettable series of adventures. 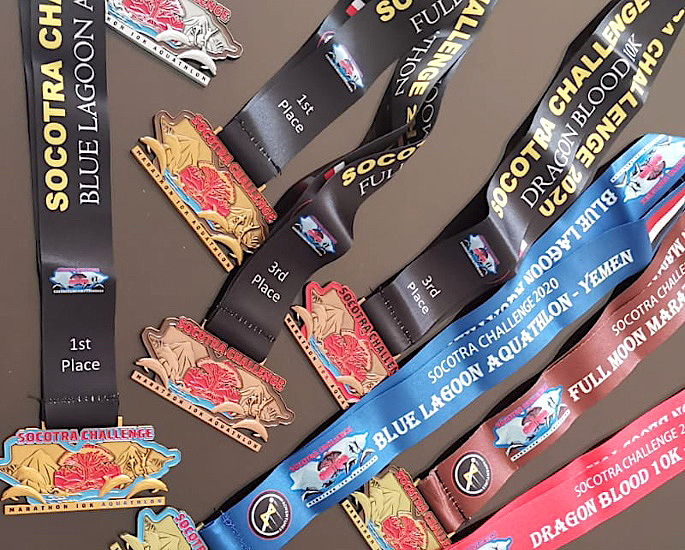 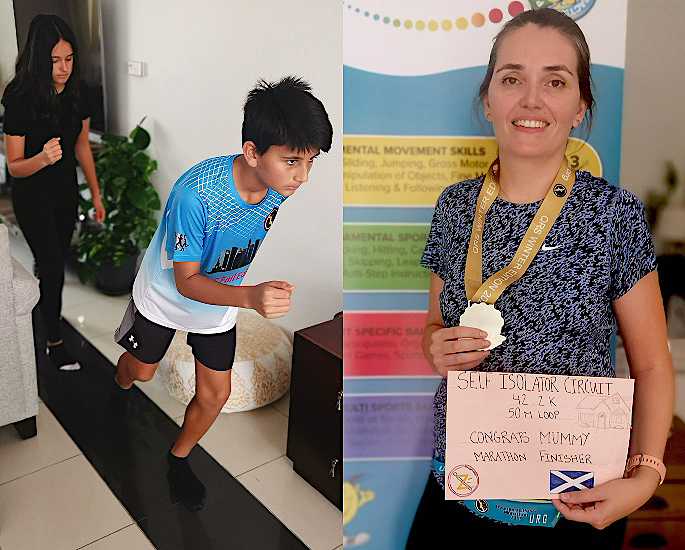 The coronavirus had a positive impact on Ziyad Rahim and Z Adventures upon returning to Qatar. He has more time to train and plan. It has also allowed Ziyad to train with his family and be innovative.

With people not able to freely run outdoors, in marathons and other series, he came up with a challenge.

He has been a driving force behind the Self-Isolator-Circuit, which is gaining a lot of momentum. Ziyad was inspired by a person in China who ran a marathon on his balcony.

He then made the decision to make it an official event to encourage others.

Ziyad pursued this idea so that runners remained active. He describes the Self-Isolator-Circuit, saying:

“With the self-isolating challenge, you have to run inside your house. Like in your living room or in your backyard.

“You can’t go on a treadmill. You can’t even go outside, on the streets to run. So that’s the challenge. And people have been running full marathons on a 20-meter circuit.”

Ziyad states that the challenge is possible in one day. The alternative option is to conduct the challenge over a week. This is where one can slowly run for 6k a day until a full marathon (42k) is completed.

Upon completing the challenge, people receive certificates, which they can then post on social media to inspire others.

Ziyad mentions this challenge is gaining popularity throughout the world. Many people were signing up from the USA, UK and China.

The Self-Isolator-Circuit is definitely having a multiplying effect and engaging the running community.

Some people are even live-streaming the challenge on Facebook. Ziyad himself is doing the Self-Isolator-Circuit with his family every day in the morning.

He defines the circuit in his house, stating:

“We’ve measured a 50-meter circuit, which starts in the living room. We then go into the dining room and kitchen and then we come back.

Ziyad claims the biggest advantage of the circuit is to raise awareness about social distancing. Boosting the immune system and mental health, along with reducing the spread of the virus are the other major benefits. 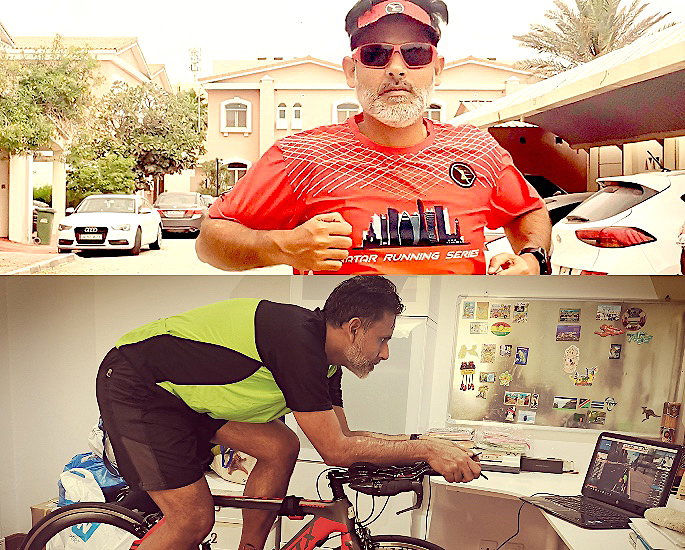 Ziyad also runs one hour every other day around his quiet gated community compound. Additionally, he cycles on alternate days using his turbo trainer at home. The turbo trainer is like a cycling treadmill.

Finally, he also does a brick session where he cycles first and then goes for a run. According to Ziyad, this is great for triathlon training.

He is also using ZWIFT, which is a home cycling and running virtual training app. He connects his smart trainer with the software to make it more difficult when completing different courses.

Ziyad Rahim and his company Z Adventures are preparing for future events, following some 2020 cancellations. This includes arranging the second edition of the Khunjerab Pass Marathon Challenge on September 19, 2020.

He has all the credentials to pull this off in 2020, despite the global coronavirus pandemic. With all his Z Adventure events, Ziyad has to be very meticulous with any preparations.

He has to arrange permits and charter planes, as well as getting courses certified.

Ziyad Rahim could not have scripted his running adventures any better during the COVID-19 outbreak. His story would make a very good sports film.